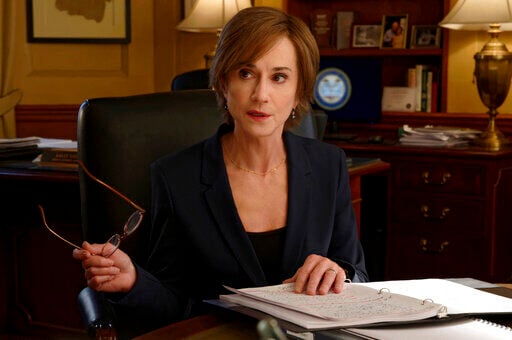 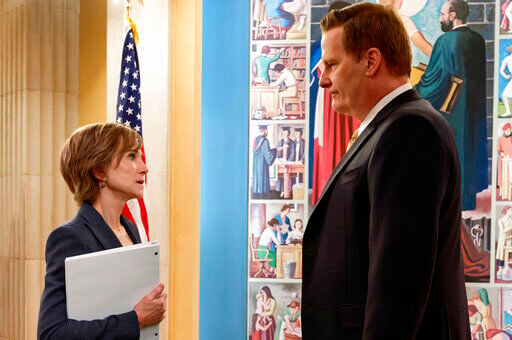 LOS ANGELES (AP) Â Holly Hunter has been entrusted with playing an array of real-world women, from tennis great Billie Jean King to a cheerleading mom gone astray to her latest role, a federal prosecutor caught in the maw of politics.

In ShowtimeÂs ÂThe Comey Rule,Â the Oscar-winning actor ("The Piano") was cast as Sally Yates, whose decadeslong career imploded along with that of FBI director James Comey and others serving in the Trump administration.

For Hunter, the projectÂs main draw was playing Yates, Âwho has enormous integrity, and brought an incredible positive, ethical energy and intellect to the Justice Department," she said. The two-part drama debuts 9 p.m. EDT Sunday and Monday.

In YatesÂ 2017 Congressional testimony on Russian election interference, she came across as poised and exacting, befitting a lawyer who reached the level of deputy U.S. attorney general (and, for 10 days, acting attorney general, until she was fired after refusing to enforce a travel ban on Muslims).

As Hunter became more versed in YatesÂ role in events surrounding the 2016 presidential campaign and the election of Donald Trump, her respect grew Â even more so after meeting her fellow native Georgian.

ÂSheÂs got a great sense of humor. SheÂs very, very real, very down-to-earth," Hunter said. ÂShe's an enormously optimistic woman. ... I think that there are a lot of people in government who are incredibly optimistic and have real hopes, real dreams about things that they want to accomplish.Â

Yates, who is briefly mentioned in Comey's account, gets her say here. In one scene, she recalls her work on a lawsuit in which an all-white jury found for an older Black woman whose land was at risk of being taken.

ÂI had never tried a case before. I didn't even know where to stand. ... But that jury did right,Â Yates tells a young aide. ÂYou remember that, next time somebody tells you this country canÂt be its best self or the law doesnÂt matter.Â

Actors can become attached to the fictional characters they play, but Hunter has developed bonds with some of the real-life ones. That includes King, whom she portrayed in the 2001 TV movie ÂWhen Billie Beat Bobby,Â about the 1970s battle-of-the-sexes tennis match between King and Bobby Riggs (Ron Silver).

Hunter received an Emmy nod for the role and won the trophy for a pair of other TV movies, 1993's ÂThe Positively True Adventures of the Alleged Texas Cheerleader-Murdering MomÂ and 1989's ÂRoe vs. Wade."

ÂIn a way, the greatest thing I got out of playing Billie was Billie as a friend,Â Hunter said. It also made playing her more difficult, Âbecause I was afraid I was going to completely screw her up.Â

She is also Âsteadfast friendsÂ with Susan Zirinsky, the inspiration for the driven TV news producer in 1987's ÂBroadcast News.Â Hunter said she and the journalist, who was an associate producer on the film, became close after it was made.

"I was at such a different place in my career, which is to say at the beginning," Hunter recalled. ÂI wasnÂt worried about offending Susan or not bringing Susan to life. I was just worried about myself. I was worried about, like, ÂWow, am I actually going to be able to do this?'Â

The film earned seven Oscar nominations, including one for Hunter.

In 2019, Zirinksy became the first female president of CBS News, and Hunter surprised her at a party with a one-of-a-kind congratulatory gift: A silver plaque from ÂBroadcast NewsÂ given to Hunter's character, Jane Craig, after she was promoted to Washington bureau chief.

ÂThe Comey Rule,Â originally set to air after the Nov. 3 general election, was moved up after creator Ray expressed disappointment about the post-election timing in a letter that became public.

Hunter said she can't predict how ÂThe Comey RuleÂ might be received in these polarized times. SheÂs a Democrat who calls herself Âdefiantly anti-Trump,Â but isn't politically active and said she prefers to keep a low profile in every regard.

ÂI think it's my profession. I like being an actress and being somewhat of a blank slate," she said. ÂI have never, ever talked about my personal life. It's just not my thing.Â

Lynn Elber can be reached at lelber@ap.org or on Twitter at http://twitter.com/lynnelber.