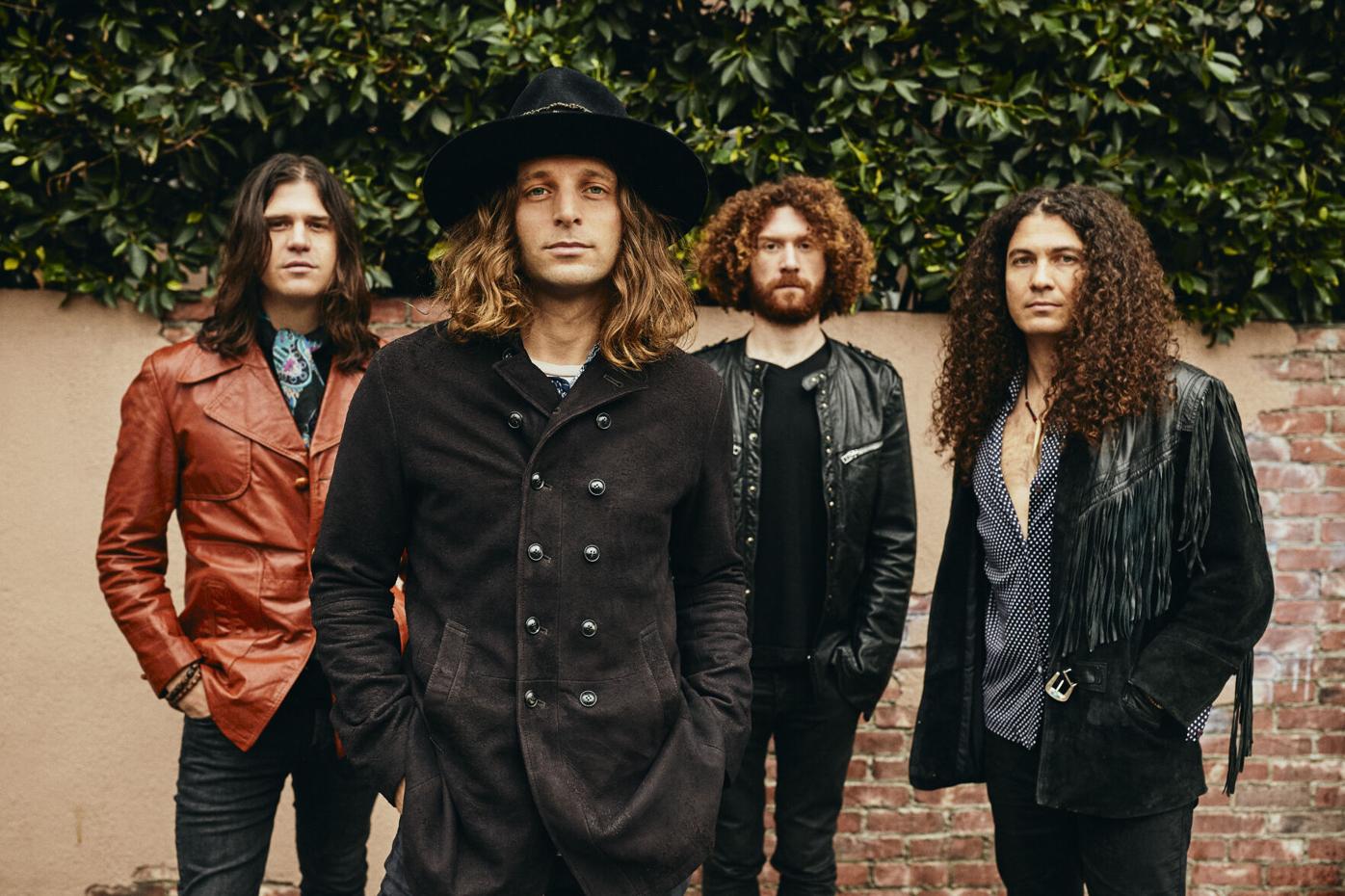 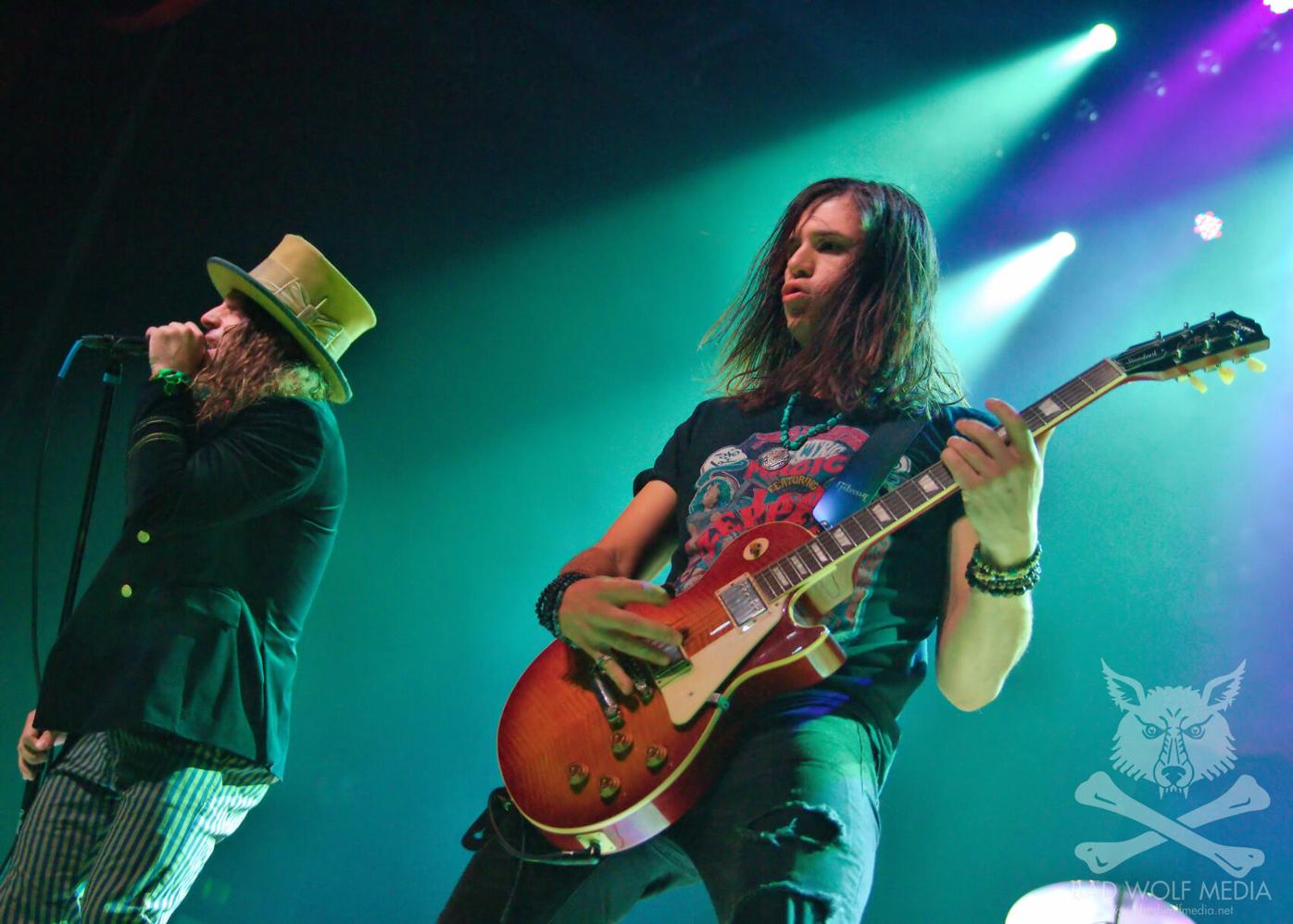 Guitarist John Notto (r) on stage with vocalist Marc LaBelle at the Pageant in St. Louis on October 14, 2019.

Guitarist John Notto (r) on stage with vocalist Marc LaBelle at the Pageant in St. Louis on October 14, 2019.

In 2019, a young band out of Los Angeles shook the rock world by releasing a song that went to number one on the rock charts without any support from a record label. "When I'm Gone" from Dirty Honey reached the top spot on Billboard's Mainstream Rock chart in October of 2019. The follow-up, "Rollin' 7s," climbed to number three on that same chart six months later.

With a 2020 headlining tour behind them, the band was set to fly out of Los Angeles to get back in the studio with producer Nick DiDia. That was when the world went dark. Thanks to modern technology, the band was able to set up shop in LA and still work with DiDia remotely.

This week, Dirty Honey is about to head out on the road for the first time in year and a half. Tapped as the direct support for the long-awaited Black Crowes reunion tour, Dirty Honey is set to make an even bigger seismic wave when they get in front of the crowds on this run of show.

Guitarist John Notto took some time out before heading for the buses and planes to talk about the experience of making an album during lock-down, writing a full-length album, and the music that got him interested in standing on stages for a living.

Mike Sorensen: You guys are doing all the press for the new tour, so on a scale from a speeding ticket to a root canal, how's your day been?

John Notto: (laughter) It's not bad! You're only number two, so it's going okay.

MS: You guys are just coming off a headlining tour and are getting ready to go out with the Black Crowes. With the new album, you guys had been planning to go back to Australia to record, is that right?

JN: Yeah, we were going to go back to Australia, but obviously the quarantine prevented any international travel. We elected to stay here in LA. Nick, the producer, from his time working here in LA, was able to book us some time here at Henson Studios. We banged out eleven tracks in six days, and obviously we only released eight of them. That's because we're picky bastards. We had Nick via Zoom, and he was also able to listen in HD in real time to what we were doing through a plugin in Pro Tools that went directly to him. That was pretty cool.

MS: And you were handling some of the recording and mixing for the early, rough takes of the tracks?

JN: You mean like the demos? Yeah, we did those at my house.

MS: How does that change how you hear the songs? The different between playing the songs yourself and then trying to put together the different pieces?

JN: It's a little different. You hear everybody's part individually, and you hear where everybody's locking in together, where we're not. It's really about the arrangements more than anything. So we got all of that changing and rearranging and drums and bass, we got the rearranging and tightening all done before we set foot into Henson.

We walked into Henson pretty much knowing what we were going to do. The real benefit of that is we could spend our time recording actual takes of the songs. Even more than the last record, that's what you're hearing. You're hearing the rhythm section, the rhythm guitars, that's us playing together. It gives it a little more of a raw energy, I think.

MS: I do think that's a little rarer these days, but it sounds great on the album.

JN: It's very rare. We still isolated the amps and stuff. We're not, ya know, doing it Rolling Stones style, with bleed everywhere. But we're definitely performing it together.

MS: I was fortunate enough to see you guys with Alter Bridge in 2019 and on your headline run last year, both in St. Louis, and I have to say for everything that comes across on the album, there's nothing like seeing you guys on stage. It sounds like what rock and roll should sound like.

JN: Thank you. That's definitely high praise, and it's one of the goals of this entire project.

MS: I know along with Alter Bridge, you guys did opening runs with Guns N Roses, the Who, Slash, and the Black Crowes are coming up. Did get any really great pieces of advice from any of them?

JN: Not really, not directly. We didn't really get to hang out that much with Guns or the Who. Even Slash, he's a pretty aloof guy. The guys in Slash's band were great, and so was Slash, don't get me wrong! I understand it. He's so famous, and he's kind of a recluse anyway, I think, so he just kind of keeps to himself. We certainly didn't take any offense, we kind of figured that's how it was going to be. He was nice, he gave us a big thank you and gave us high praise.

Honestly, we probably learned the most with Alter Bridge, from Miles Kennedy and Mark Tremonti and those guys. Tremonti especially, he really took an interest in the band and me, he would try to eat dinner with us in catering, just hang out, jam. He would ask us what we were planning to do, where we wanting to go as a band. They were all really cool and supportive.

MS: Looking over bands you cite as influence, you have everything from Van Halen to Led Zeppelin. I did the note that you didn't really get into the Beatles until later. Do you have one particular album or song that flipped a switch and made you said "This is what I want to do."

JN: I always liked performing for people, even before I played guitar. For family, things like that, my friends and I would have our air guitars. We didn't even do a good job, not even for our parents! Mostly just being a class clown type of character.

I think the song that really put the passion forward was "Whole Lotta Love," really. That guitar break was just really mind-blowing to me, even as an eight-year-old. After the psychedelic section, when he goes into the guitar solo, right? Just the tone of it, every lick he plays is just a perfect answer to lick before it, that whole groove, that riff. That transformed it for me. I found that record in my mom's collection.

MS: You guys get compared to the sound of Led Zep and early Aerosmith. I can't imagine that's insulting, but are the comparisons something you're okay with?

JN: I think, ya know, we just make the music we love. You can't be okay or not okay with what other people think. Comparisons are natural. That's just what your mind does when hear something, your mind will draw to something that's familiar. I think the comparisons I've heard have all been in a high-praise manner, that we remind them of that, but we still sound like ourselves, so of course we're going to be okay with that.

MS: As I said before, I can't wait for this upcoming tour. I was excited abou the Black Crowes show, but when Dirty Honey was announced as the opener, that sold it for me.

JN: Thank you! I think it's a good look for us. It's a step up for us, in terms of level. We've never played for that big of crowds that many nights in a row. We haven't gotten the nod from a big act for this kind of commitment. It's our chance to step up and be great. You've got to take those opportunities and smash them out of the park.

MS: I asked Justin this when I had the chance to talk to him last year, so I wanted to ask you, also: Are you ever tempted to mess with Marc's hats? Hide them before a show, something like that.

JN: HA! No, I hadn't thought of that, actually. No, I haven't been tempted yet, but you may have just planted a seed. I don't know, though. He might not have much of a sense of humor about that.

MS: Is there any last words you want to say to fans, to people just finding the band?

JN: If you've already heard us and you're coming again, thank you. For those who are coming to us new, well, we didn't come here to have a bad time. So come see us on the Crowes tour. It's gonna be a great night, start to finish. They have a lot of great production in their set, and they're giving us 55 minutes to play, which is rare for an opener. So you're gonna get a full hour of new-fashioned rock and roll before you get hours of the classics.

MS: I like that term, new-fashioned rock and roll! I think that's a perfect description!

JN: Thank you, man, I came up with that myself! Please spread it, I'm into it!

The Black Crowes Present: Shake Your Money Maker tour kicks off this week in Nashville, Tenn. with Dirty Honey starting off the evenings. On Saturday, July 31 the tour pulls into the Hollywood Casino Amphitheatre in Maryland Heights, Mo. For tickets and show information, visit livenation.com. For more about Dirty Honey, visit their Facebook page or go to dirtyhoney.com.

The Black Crowes make good on their reunion tour promise

Despite a tumultuous career that’s been known for the family feuds in the past, The Black Crowes announced a reunion tour in November 2019. Th…