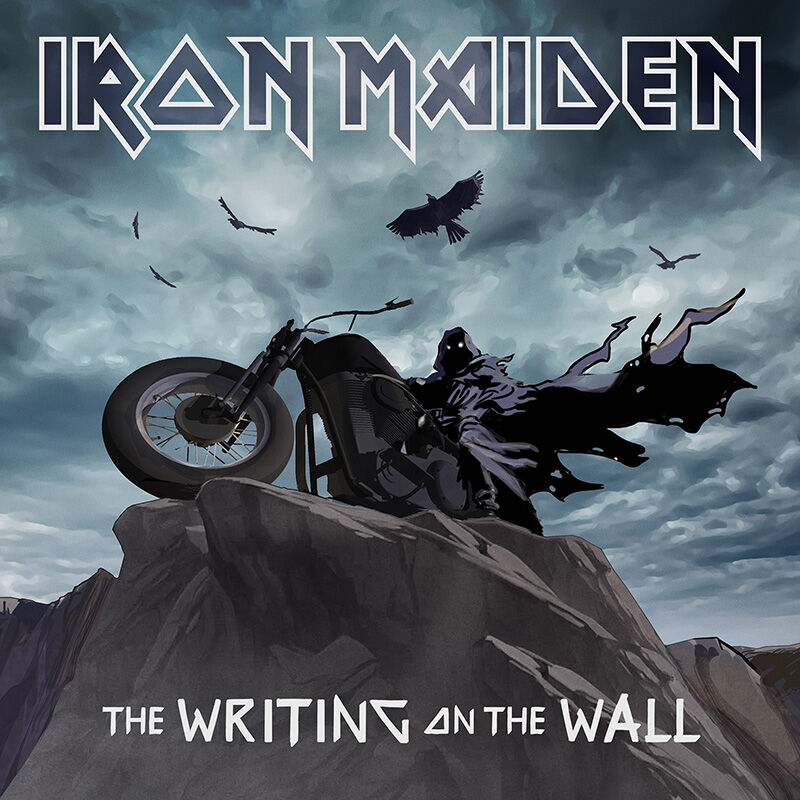 The first new music from British metal band Iron Maiden was released on Thursday. "The Writing on the Wall" tells a story of a world wasted.

A still from the new Iron Maiden video for "The Writing on the Wall" shows four mysterious riders looking over a desolate world. The single and video released Thursday is the first new music from the band since 2015's "Book of Souls."

The first new music from British metal band Iron Maiden was released on Thursday. "The Writing on the Wall" tells a story of a world wasted.

A still from the new Iron Maiden video for "The Writing on the Wall" shows four mysterious riders looking over a desolate world. The single and video released Thursday is the first new music from the band since 2015's "Book of Souls."

Six years after the release of their "Book of Souls" album, legendary British rockers Iron Maiden dropped a new song and cinematic video to the world on Thursday.

While not exactly a surprise, it also wasn't exactly clear what was coming. Following a few weeks of mysterious posts on their social media channels, including previous album covers and cryptic flyers referencing "Belshazzar's feast," the Biblical story that tells of warnings unheeded. In keeping with this theme, the Maiden camp released their video for new track "The Writing on The Wall."

The new song, co-written by vocalist Bruce Dickinson and guitarist Adrian Smith, tells the tale of a wasted world. Not simply a world laid to waste, as depicted in the animated video, but of a race of people that squandered what they had in petty bickering. The video shows that devastated world, with the powerful, still lording over the downtrodden, making their way to a dystopian bacchanal that only the privileged can enter. When one of the rabble tries, he's destroyed by a power from above. On one piece of scrap, the summation of the concept can be seen scrawled in Latin: sic transit gloria mundi - "So passes the glory of the world."

The song itself is a bit more down-tempo than a lot of Iron Maiden's previous work. The opening riffs of the song lean heavily into the southern rock genre. Anyone that listened to this year's Smith/Kotzen album - a collaboration with Adrian Smith and Ritchie Kotzen of the Winery Dogs - shouldn't find this to be any surprise. When Dickinson's vocals come in, along with the other guitars powered by Dave Murry and Janick Gers, founder Steve Harris's bass, and Nicko McBrain plunking away on the bell ride cymbal, it definitely leaps squarely into Maiden's lane. At just over six minutes, the song doesn't even come close to the length of some of the band's earlier epics, but it still carries a similar weight to tracks like "Rime of the Ancient Mariner" or "Empire of the Clouds."

Unlike a lot of the band's earlier work, this one doesn't describe a moment in history, a legendary battle, or translate a famous work of literature. Instead this song is a warning: This is the future humanity is facing if we stay on the current path. The story comes from the ponderings of singer Dickinson.

"I had a pretty clear idea of the concept to accompany the song," he said in release on the song. Dickinson recruited some of the best talent in the field of animation to breathe that concept into life.

Mark Andrews and Andrew Gordon were drafted into the effort, but it was hardly kicking and screaming. With more than 50 years of combined experience in the animation field, including work on Pixar films like "Finding Nemo," "Brave," and "The Incredibles," the pair are self-professed Maiden fans. They brought in director Nicos Livesey of BlinkInk to shepherd the idea into colour images on the screen, blending styles of animation including a fully-rendered 3D samurai version of the band's mascot, Eddie the Head.

Livesey said he had people throwing themselves at him for the chance to work on the Maiden video.

"We had more than 60 people in 13 countries, from Brazil to France, Romania to the U.S.A, to add something to the clip," he said. "I'd say their love, passion, and understanding of the band shines through every frame."

The release of the song and video aren't the end of this road for Maiden fans, however. Along with nods to previous Maiden albums and songs, a recurring theme from the social media campaign carried over to the video. In some of the flyer images release over the last week, the inscription "IMXVII" could be seen. This has been read by fans as meaning "Iron Maiden 17," which would be the number of a new studio album in the band's history if it were to be released. In the video, a motorcycle's gas tank is also marked with 17 hash-marks, keeping the theory alive.

The video can be found on Iron Maiden's YouTube page, while the song itself is available on major streaming and digital-music seller's sites.