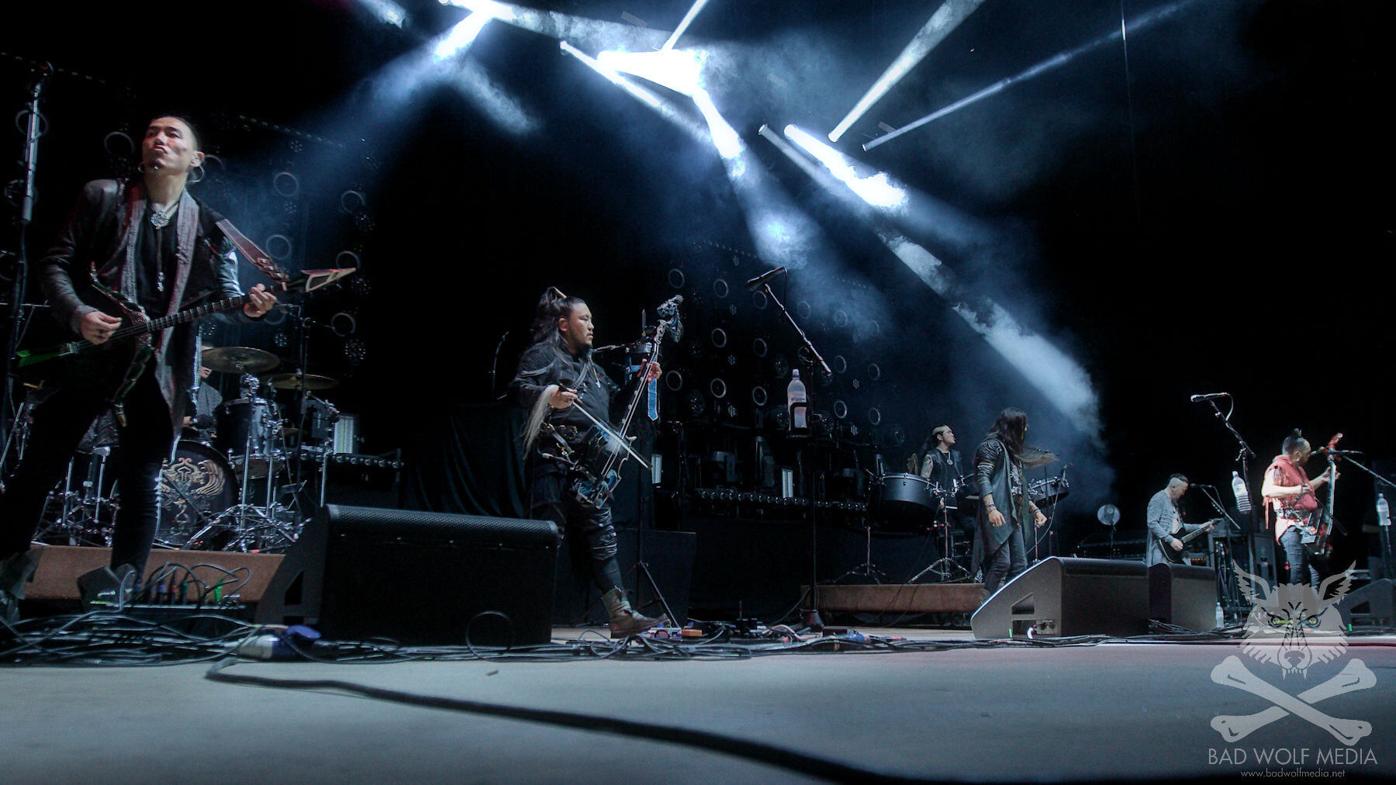 The Hu Band onstage at the Ozarks Amphitheater on September 4 as part of "The Hun Tour North America 2021." 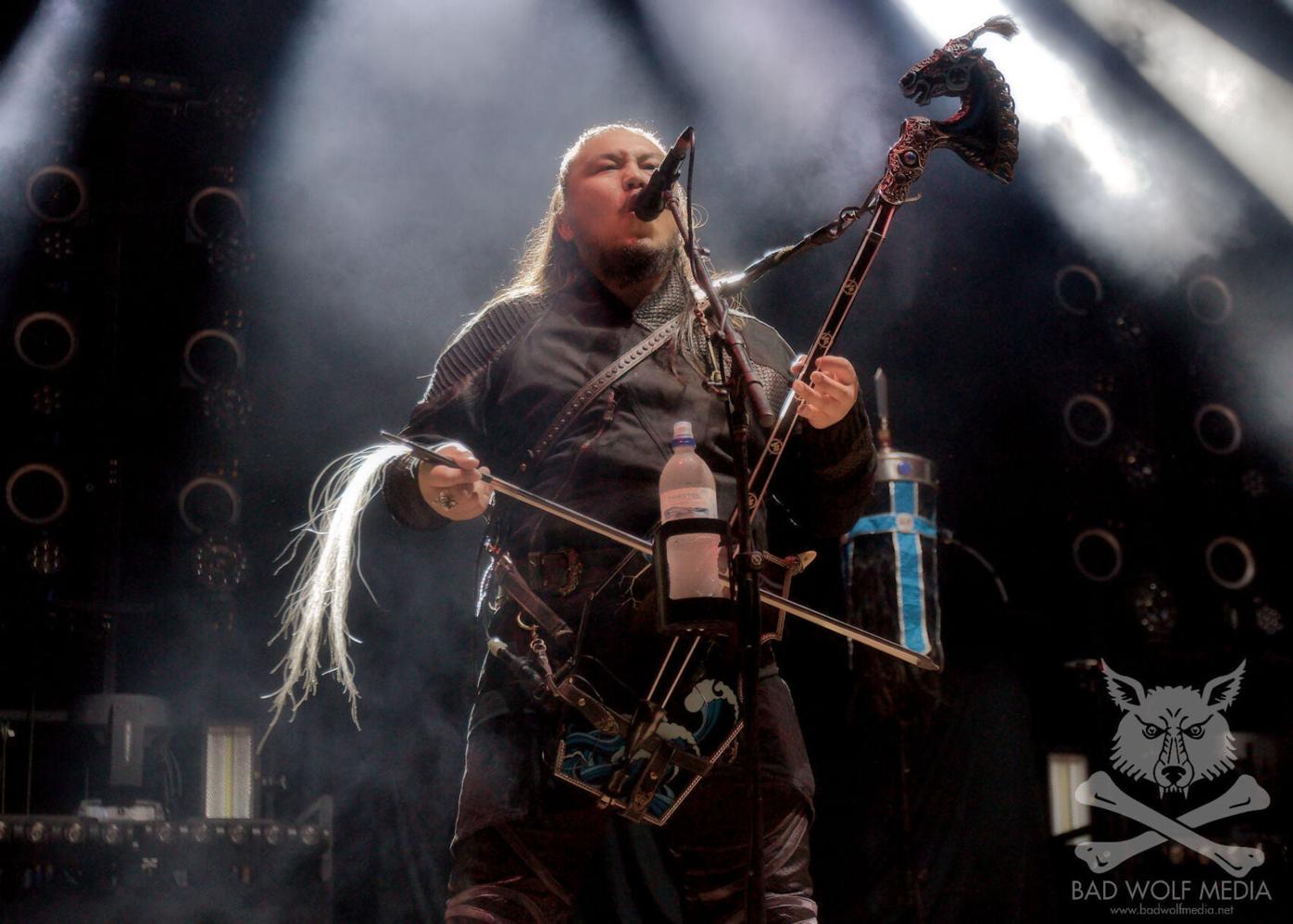 Galbadrakh "Gala" Tsendbaatar on stage earlier this month in Camdenton, Mo. with The Hu Band. 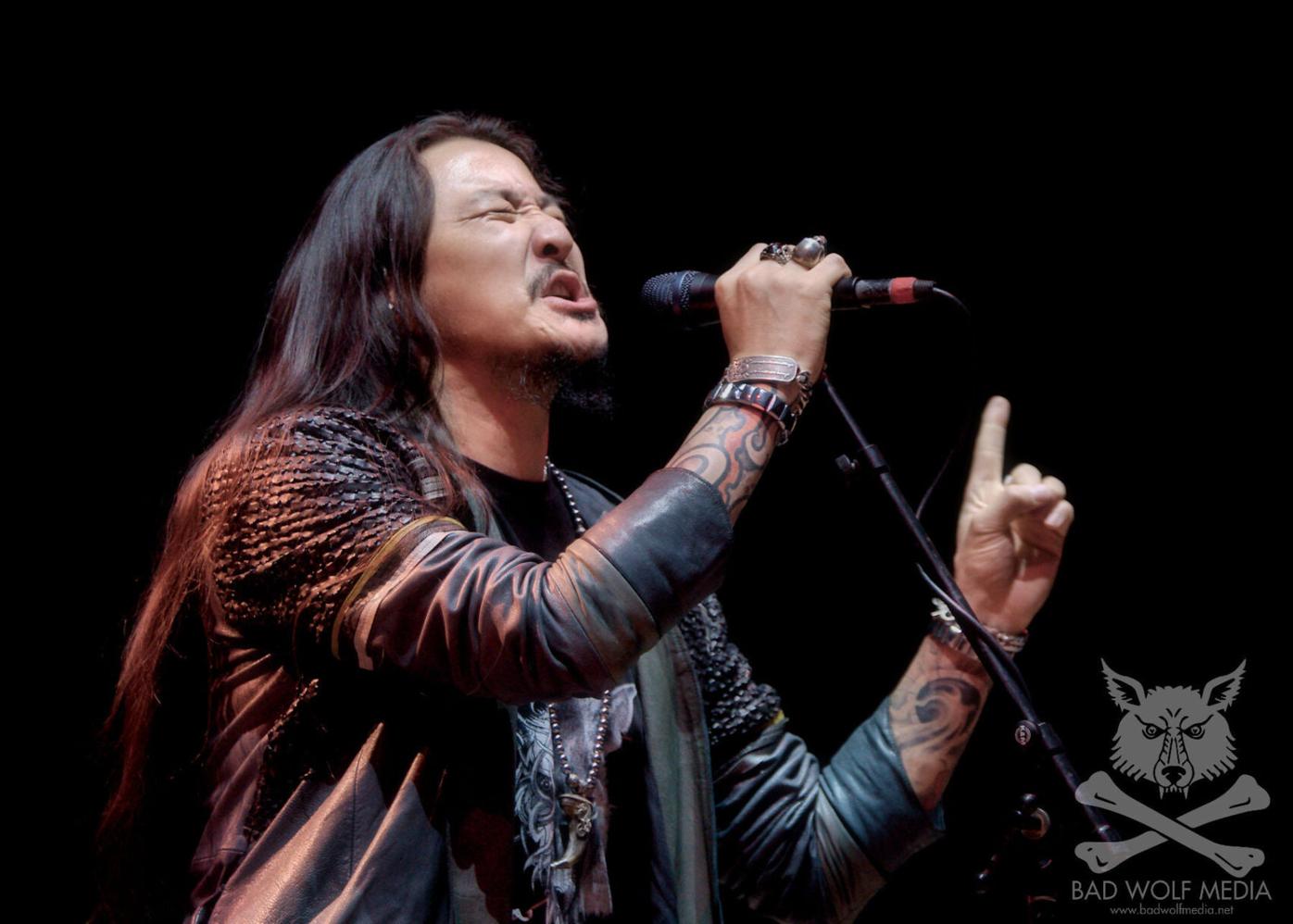 The Hu Band onstage at the Ozarks Amphitheater on September 4 as part of "The Hun Tour North America 2021."

Galbadrakh "Gala" Tsendbaatar on stage earlier this month in Camdenton, Mo. with The Hu Band.

Three words that come together in what may seem like an alien concept to American audiences: Mongolian. Folk. Metal.

But those three words are the defining traits of The Hu Band. Comprised of musicians playing traditional Mongolian instruments along side electric guitars and drums, the band burst onto the music scene in 2018 with their YouTube videos for songs "Yuve Yuve Yu" and "Wolf Totem." Those two videos now have a total of nearly 145 million views combined. "Wolf Totem" reached number one on Billboard's Hard Rock Digital Song sales, becoming the first Mongolian act to top any Billboard chart.

They're first album, "The Gereg," arrived in September of 2019, with an expanded deluxe version arriving in July 2020. The band has re-recorded several of their songs as duets with American artists such as Jacoby Shaddix from Papa Roach, From Ashes to New's Danny Case, and Halestorm vocalist Lzzy Hale.

After being locked down in Australia for months when the COVID-19 pandemic began, and then staying home in Mongolia for nearly a year, The Hu Band hit American shores again on September 1 for The Hun Tour North America 2021, playing major festivals and headlining their own shows.

Last week, Nyamjantsan "Jaya" Galsanjamts and Galbadrakh "Gala" Tsendbaatar took some time out from their tour schedule to speak with me about the return to the road and the imminent release of their sophomore effort. The band's manager, Tuga Namgur, took on the job of translator, since (to the best of my knowledge) I don't speak Mongolian.

Mike Sorensen: The Hu is finally back on tour, playing at festivals, opening for bands like Halestorm, as well as headlining shows. Is there a preference as far as playing to larger crowds, but with a shorter set, versus a full set for a smaller audience?

Gala: There's not really a preference. We're okay with anything, because in our case, we want to share our music with as many people as possible. But the smaller, more intimate venues, those shows are amazing, too.

MS: I was at the show in Missouri a few weeks ago, and I know a few of the songs in the set haven't been released yet. Are there plans already for a second album to arrive soon?

Jaya: Because of the pandemic, we were locked down at home, in Mongolia. So during that time, we did a lot of recording for our second album. And right before we left for this tour, we finished the recording on those songs. So the second album is coming, soon.

MS: That's excellent to hear. I love the first album, and I love the deluxe version of that. The deluxe version had some of the re-recorded songs you've done with English-speaking artists, and you've also recently done a couple of Metallica covers, with "Sad But True" and "Through the Never" from the Blacklist project. You've even done a track for Star Wars, just a lot of things outside of your own albums. Are there other side-projects like that on the horizon?

Gala: We wanted to share our music with the entire world, and that includes working with these other great artists. Right now, there's nothing we can specifically say, but there are some things we already have in mind, that we've just started thinking about.

MS: That's a perfect tease. I didn't think I'd really get any scoops, but I have to try. I just watched the new video you put out with the tour recap so far. The Hu has done a great job, branching out with projects like this and your "Hu's in the Kitchen" videos as a way to connect with your fans and let them know who you are outside of the music as well. Is there a plan to expand that sort of thing, or just continue as you have been on YouTube?

Jaya: We'll keep doing these kinds of YouTube projects, like "Hu's in the Kitchen." People know us on the stage, but we're ordinary human beings, just like our fans, and we want to share our personal lives off-stage, too. We want our fans to know who we are.

MS: It seems like you guys are just always having fun, no matter what you're doing.

MS: I think that's really all I had to ask. Is there anything you'd like to share, either with fans, or with people that may just be starting to discover The Hu, or just anything you want to put out to the world?

Gala: We'd like to tell our fans that we are planning to tour the entire world. We're all together, and we're going to overcome these obstacles, and we'll do that together, too. We just want to make and listen to good music. We just want everyone out there to be careful so we can do all of it together.

Tuga: Thank you so much for having us today.

The Hu Band continues their North American tour through Halloween before embarking on a run of dates all across Europe in early 2022. For all the details of the tour, or to find the band's music, visit thehuofficial.com.

Halestorm leads an international cast on stage in the Ozarks

Saturday night, at the Ozarks Amphitheater in Camdenton, MO, the clouds drifted away and let the clear skies rule over the stage as an eclecti…