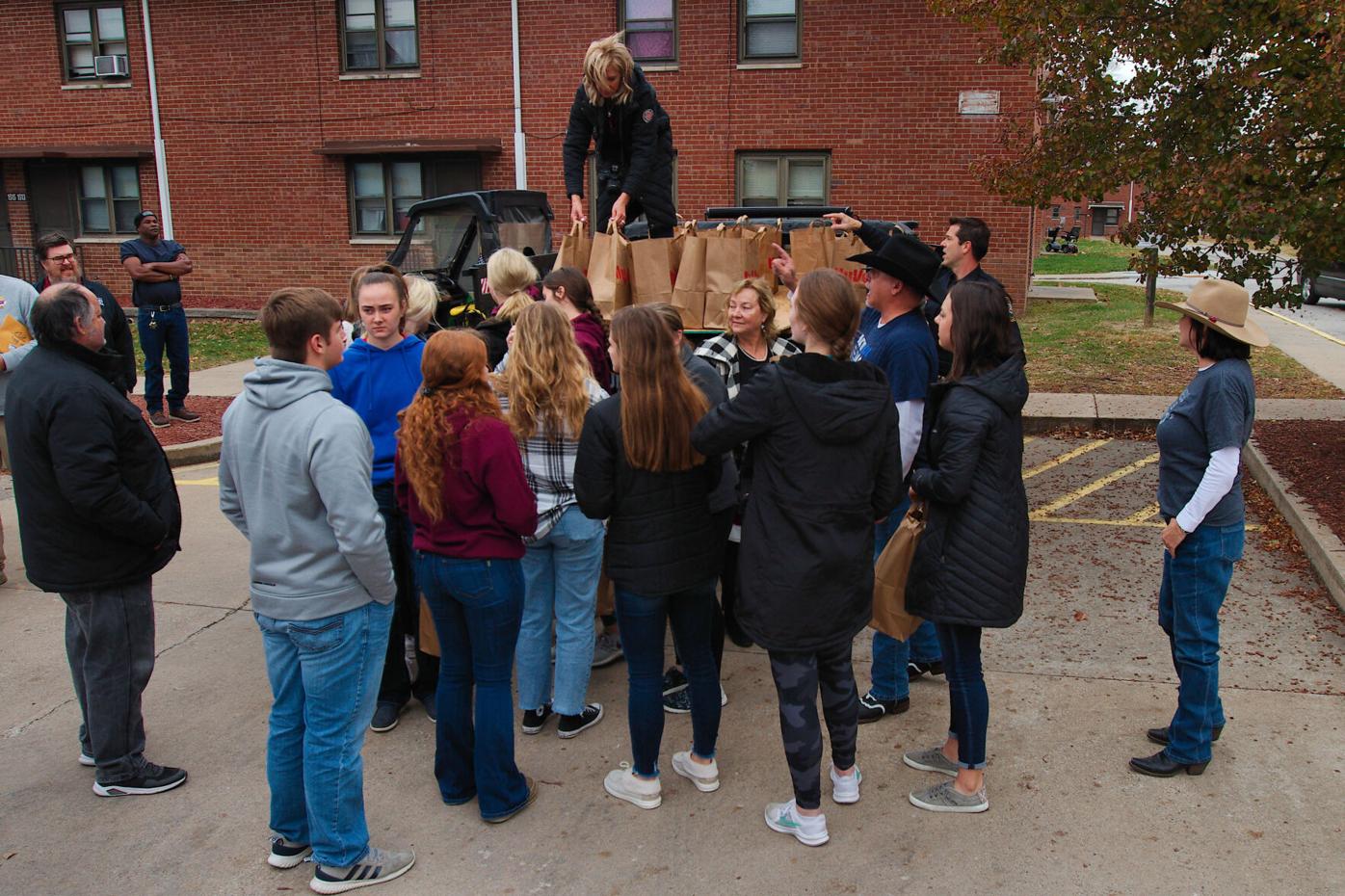 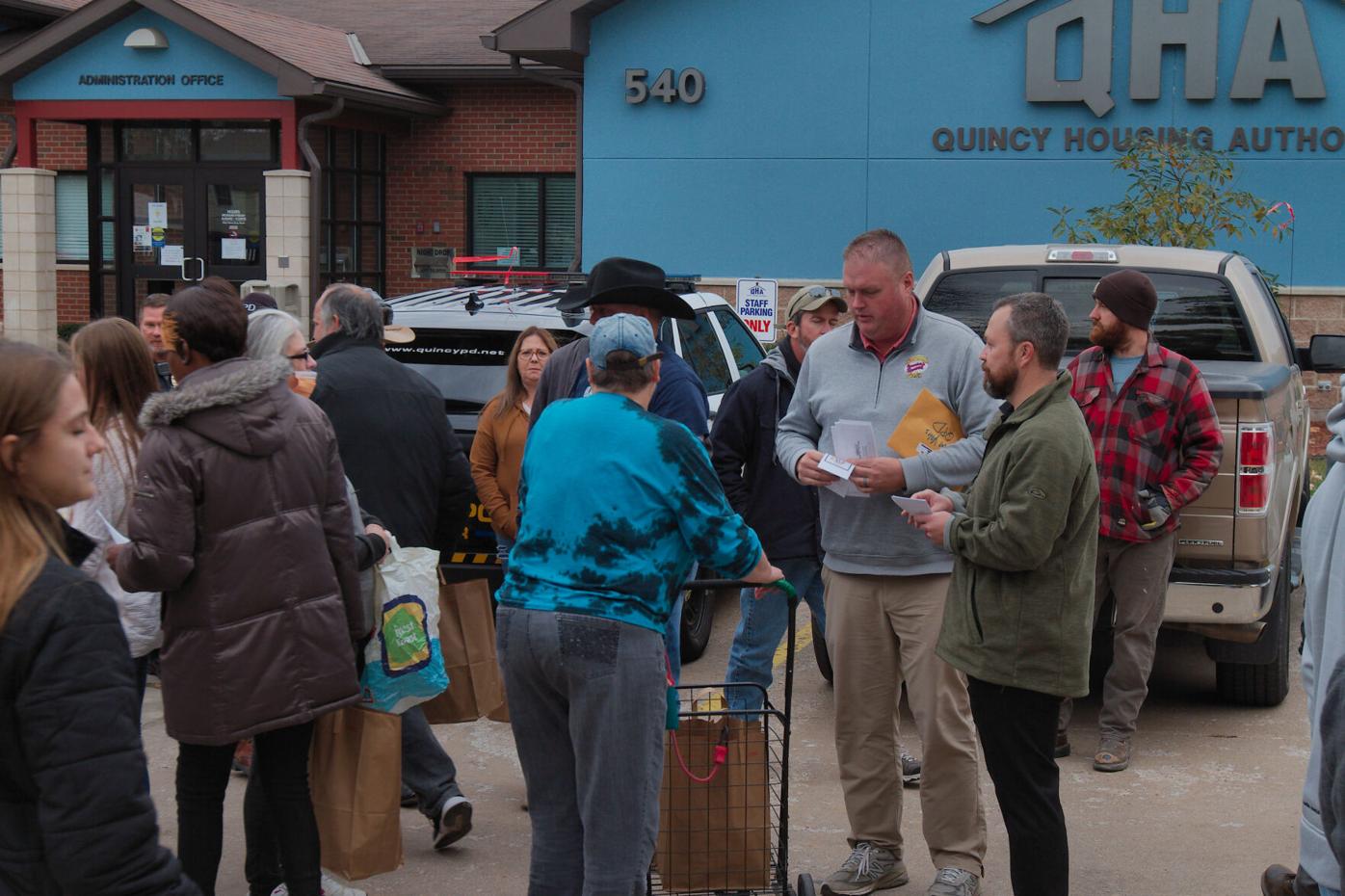 Aaron St. Clair (center, in grey) hands out $20 vouchers for Quincy Hy-Vee stores Wednesday morning. St. Clair, vice-president of sales for Red Cactus Salsa, wanted to find a way to help his company give back to the community, choosing to partner with the Quincy Police Department for the 2021 Cops Care food drive.

Aaron St. Clair (center, in grey) hands out $20 vouchers for Quincy Hy-Vee stores Wednesday morning. St. Clair, vice-president of sales for Red Cactus Salsa, wanted to find a way to help his company give back to the community, choosing to partner with the Quincy Police Department for the 2021 Cops Care food drive.

QUINCY — The Quincy Police Department welcomed the return of some familiar faces and were joined with some new support for this year’s Quincy Cops Care food drive on Wednesday.

For the sixth year, QPD personnel, along with help from We in Quincy Back the Blue, Vancil Performing Arts, and the Unity High School student council, collected, bagged, and distributed food throughout the community to those in need. This year saw the return of Joe Lord, who started the whole thing with a desire to help those who may have been struggling.

“The original idea I had about six years ago, I was single and didn’t have any family around, so I honestly started feeling a little down on myself,” Lord said. “I starting thinking, and I knew there were other people out there that didn’t have families, or kids whose parents were taken away because of drugs or in jail, a lot of situation. So I decided I wanted to run a food drive to lend a hand.

“I went to my boss at Great River Harley Davidson at the time and told him I wanted to do this,” he continued. “He told me ‘Well, you’ve got three days.’ I decided if I could feed one person, help one family in those three days, it would be worth it.”

Lord was back in Quincy from Texas, but it wasn’t a trip just for the food drive.

“I’m actually on my honeymoon,” he said with a laugh. Joe’s wife, Angie Lord, was along for the ride, which was being done with the help of massive stretched pick-up truck limousine. The limo gave all the Unity High students room to ride in comfort.

When Lord started the drive, he contacted the local biker community and had them collect the food to give out to families. He then contacted Adam Yates, now QPD’s deputy chief of administration, to get some help making sure the food would go where it was needed the most. That first year, the team-up of bikers and cops put food in the hands of 350 families. The program has only grown from there.

“After Joe moved back down to Texas, it was just so inspiring and we had such a good response, I decided we should keep doing this,” Yates said. It’s changed a little bit each year, but we’ve kept it going.

“We’ve worked with Hy-Vee again for the food, Vancil Performing Arts, Back the Blue, and QPD personnel have all helped with fundraising. And this year, Red Cactus Salsa has come on board. They heard about what we’re doing, and that my goal was to try to start including turkeys somehow into the event. So they’re donating $2,000 worth of meat vouchers good at either Quincy Hy-Vee. So that’s one of the extra perks this year.”

Aaron St. Clair, Red Cactus’s vice president of sales, said the community helped grow the company, so the company wanted a way to give back.

“I learned about Adam and this program,” St. Clair said. “We’re in a position now that we can give back, and we want to help where we can.

“This was kind of a last minute deal,” he said. “But we’re pretty excited to be a part of it.”

Yates said the Unity High students also help with collecting food or funds, but they also come in and help sort and bag the donated food. Each bag has nearly everything need to put together a modest, traditional Thanksgiving meal. The UHS students also show up on the day before Thanksgiving to help distribute the bags.

Word has spread, and there was a crowd waiting Wednesday morning as the parade of vehicles came south on Sixth Street to their first stop. By the time the last stop was made, 200 meal bags had been given out, as well as 150 Cornish hens and 100 $20 Hy-Vee vouchers.