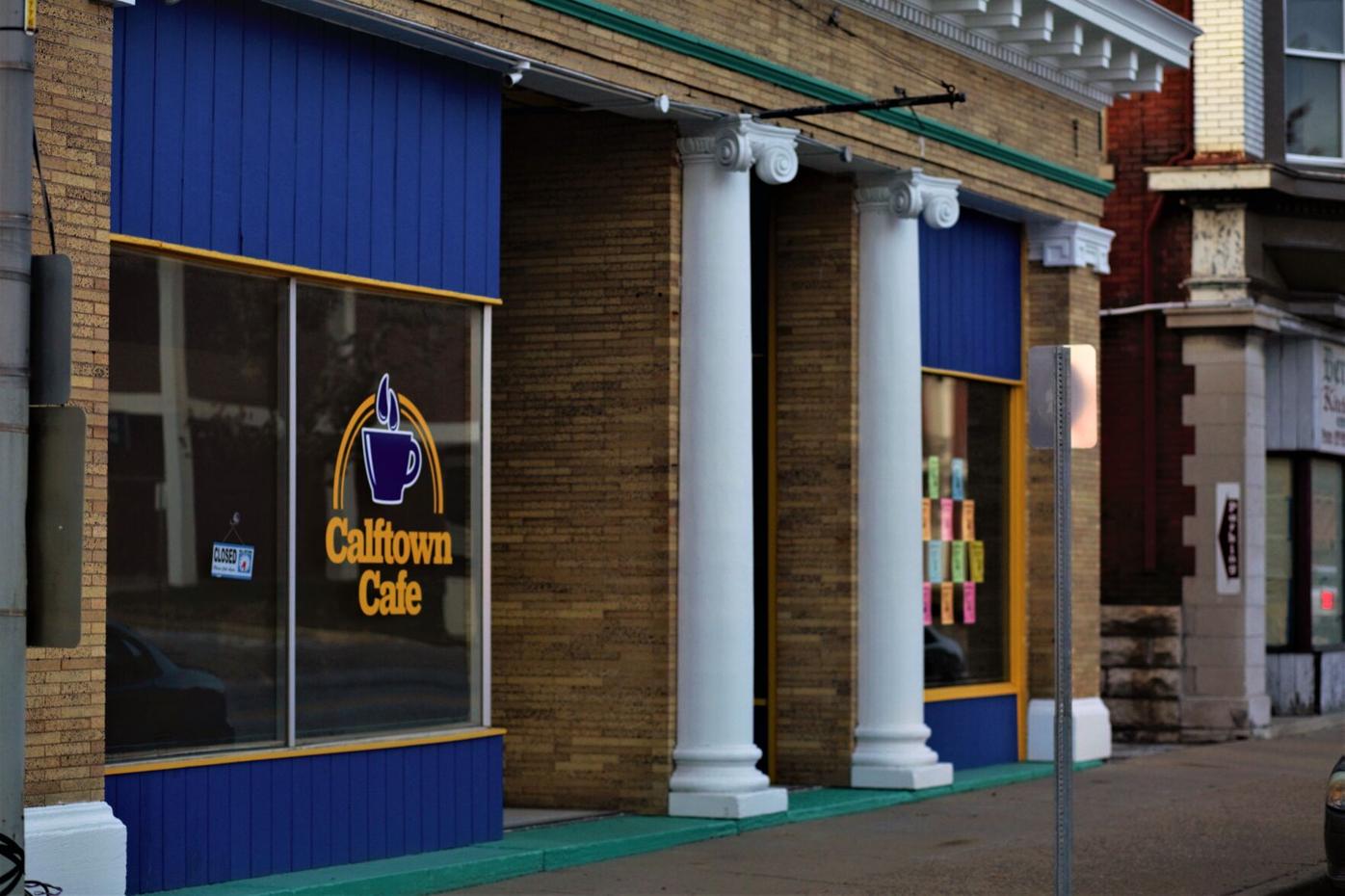 The newest addition to Quincy’s south side, Calftown Cafe officially opened on Monday near Eighth and State. The Café is just one part of the overall Calftown Corner development project. 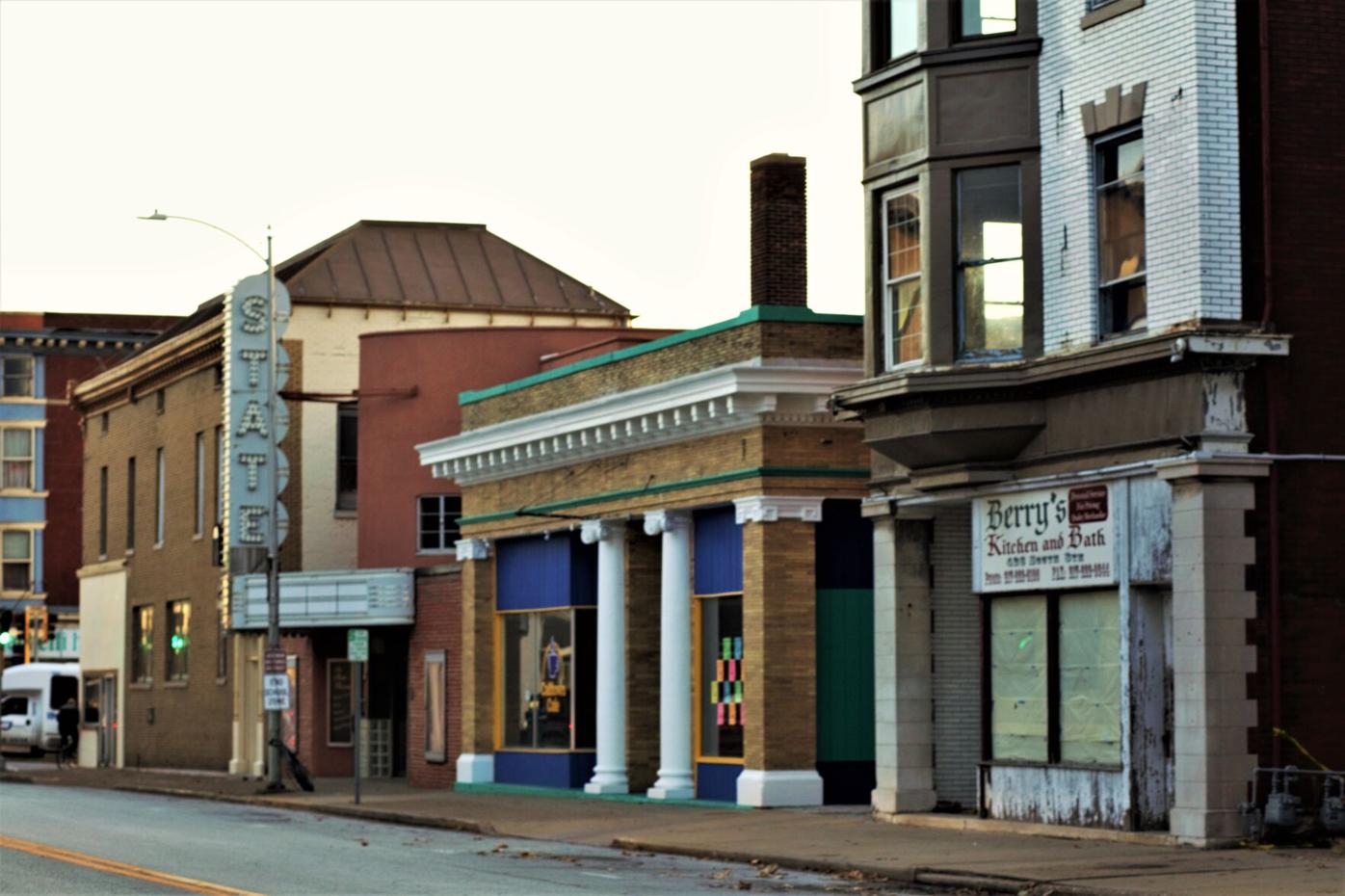 Four buildings, from State Street to just north of the alley along Eighth Street in Quincy, including the State Theater, are part of the ongoing Calftown Corner development project.

The newest addition to Quincy’s south side, Calftown Cafe officially opened on Monday near Eighth and State. The Café is just one part of the overall Calftown Corner development project.

Four buildings, from State Street to just north of the alley along Eighth Street in Quincy, including the State Theater, are part of the ongoing Calftown Corner development project.

QUINCY — A slash of blue stands out along the west side of Eighth Street near state, marking the home of the Calftown Café, the first piece of the puzzle to fall into place for the Calftown Corner project.

“It feels great to reach this milestone,” co-owner Brian Stitt said. “I think we were so focused on getting the café open, we’ve slowed down on a few other things, but now that we’ve gotten here, we’re jumping right in on other projects.”

Calftown Café had their official grand opening on Monday, and manager Bill Burns said the response so far has exceeded expectations.

“We figured it was going to be busy and we weren’t disappointed,” Burns said. “It’s actually been busier, I would say, than we even expected. It’s a ‘problem’ we love to have.”

The Café is open from 7:30 a.m. until 4 p.m. Monday through Friday, though Burns said most days the doors are open a little earlier.

“It’s usually closer to seven,” he said, “in case someone has to drop kids off early or something.”

Burns said the Café has seen customers coming in from the Pear Tree Villa, State Street Bank, the Early Childhood and Family Center, and even the Horizons Soup Kitchen. With one of the goals for the Calftown Corner project being a walkable community, it seems to be off on the right foot.

“We’ve had people coming in and say ‘I don’t live that far away, I love that you’re in walking distance,’” Burns said. “So they may have driven the first time, but I think we’ll see more foot traffic coming in.”

So far, in the first few days of business, Burns said they’ve seen around 60-100 customers come through the door each day.

Stitt say the turnout has been incredible from his point of view.

“It seems like people are going out of their way to support us and come in and show us that they’re interested,” Stitt said. “It’s felt really, really great to have all of that attention. It does feel like people are excited about there being something in this neighborhood.”

Stitt, his wife Kerstin, and their friends Douglas Peterson and Caitlyn Murray and Andy and Dana Caley are collaborating to create Calftown Corner. Along with the Café, located at 432 S. Eighth, the group is working to renovate the building on northwest corner of Eighth and State, the building at 426 S. Eighth, and the former State Room, which will see a return to earlier days.

“We’re trying to bring back the feeling of what this neighborhood used to be,” Stitt said. “So we’re reverting back to the State Theater. I think that comes from a good place, a place of history.”

Stitt said work on the State Theater will begin next week, with the goal of being open for events by May or June next year. Along with residential properties, there will be commercial spaces in two of the buildings, plus a co-working space next to the Café.

“The co-working space will hopefully open right after the new year,” Stitt said. “We don’t have a lot left to do over there. Then we’ll probably open up the reservations for the State Theater to get ready to open in the summer.

“And on top of all that, we’re still focused here on the café,” he continued. “We’re open now, but we want to make sure we’re as good or better in three months as we are now. We’re going to continue growing, getting faster, more efficient.”

Burns said that the Café is also available to rent for private use in the evenings.

The Café doesn’t offer delivery, but orders can be placed ahead of time, especially if there’s a larger order.

“Even something like seven or eight sandwiches, that may sound small, but we want to make sure every sandwich is amazing,” Burns said.

Stitt said that the Calftown Café opening has given the group momentum to keep moving forward on the rest of the projects.

“There’s definitely a boost from all the positive feedback, showing us that we’re not just wasting out time,” Stitt said. “Not only from the public as customers, but from all the great people we’ve hired, the staff, they’ve shown us how many people want to help and be a part of this.”