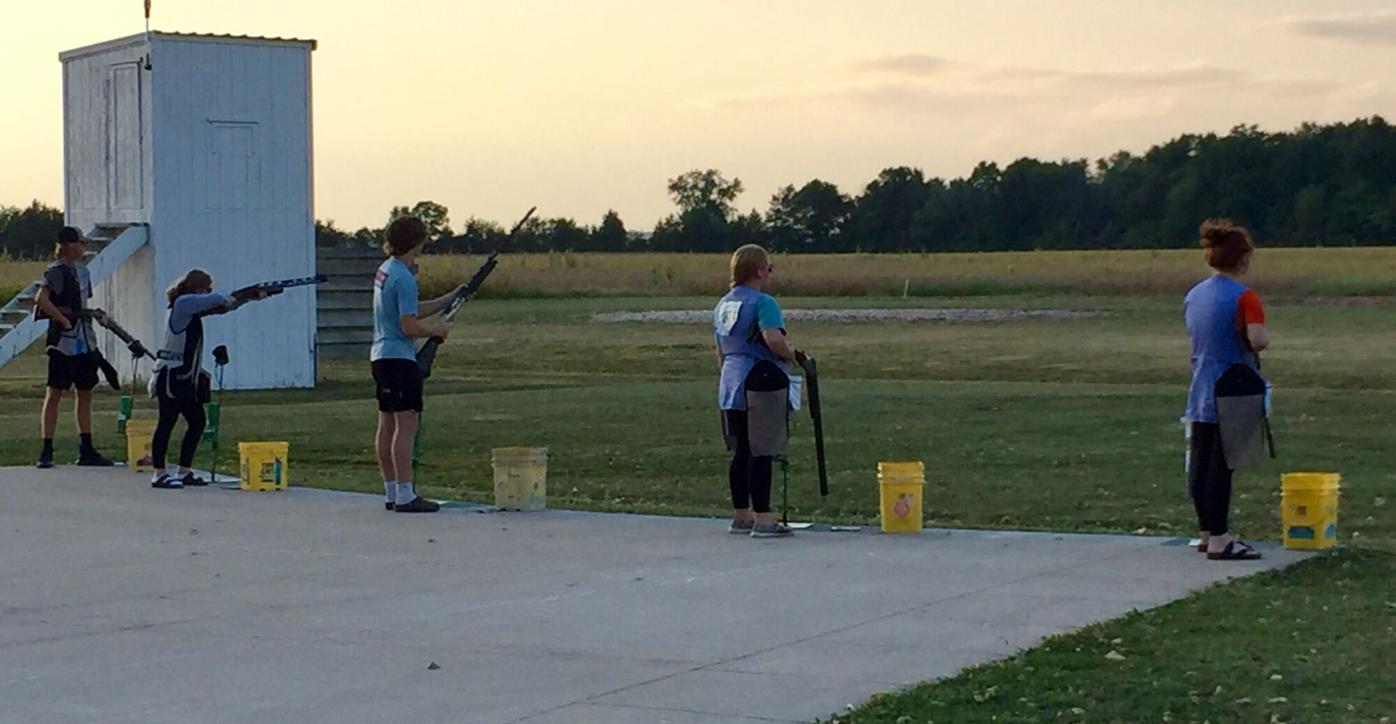 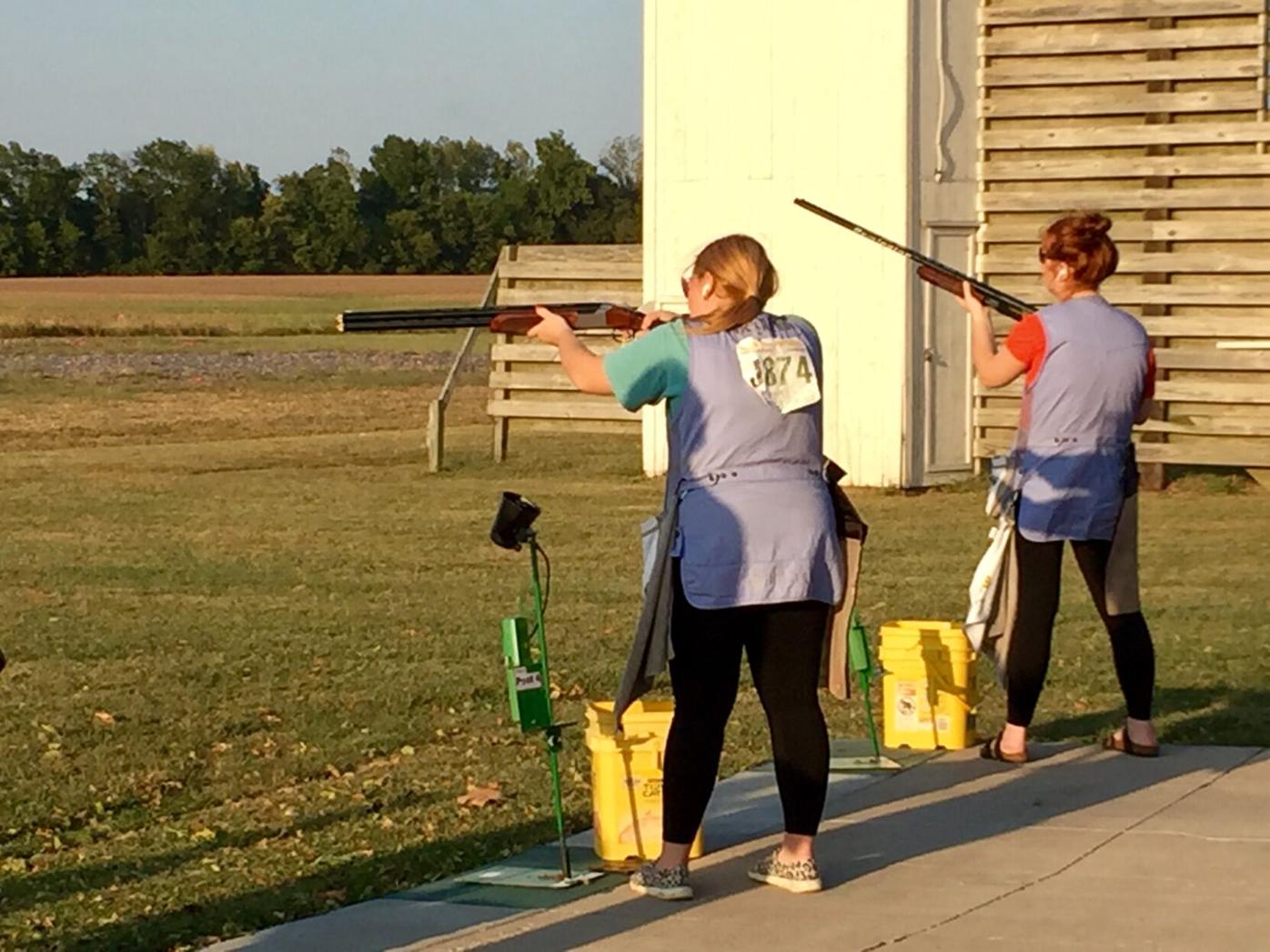 Quincy High School junior Jade Wiegmann, left, takes aim at a “bird” during a practice session for the school’s new trap shooting team. QHS and QND added trap teams this school year thanks to help from the Mississippi Valley Hunters and Fishermen’s Association.

Quincy High School junior Jade Wiegmann, left, takes aim at a “bird” during a practice session for the school’s new trap shooting team. QHS and QND added trap teams this school year thanks to help from the Mississippi Valley Hunters and Fishermen’s Association.

QUINCY — Jade Wiegmann surveys the range, lining up her sight, then the Quincy High School junior says one word.

An orange “bird” streaks into the sky, with Jade taking aim and firing her Browning shotgun at the target.

“It’s very fun for me,” said Jade, who has been shooting with her family since the age of seven or eight.

In the windy conditions, “the birds will be jumping around,” she said. “But I have it pretty well figured out.”

QHS and Quincy Notre Dame High School added trap teams this year thanks to help from the Mississippi Valley Hunters and Fishermen’s Association to broaden opportunities for students.

“It’s going to teach them gun safety, for one thing, and how to work together as a team. It seems like an individual sport, but it is a team, encouraging others,” QHS Coach Eric Nicholson said. “Hopefully it will provide an avenue to college. Lots of colleges have trap shooting teams.”

Weekly team practices began this month, with the first competition set for Saturday, Oct. 2 for QHS and Monday, Oct. 4 for QND in a five-week fall season.

Practices have team members shooting a total of 25 birds and working with coaches on their technique.

Jade, who also shoots as part of a traveling team, said she’s excited to be part of her school’s inaugural squad. So is Caleb Turner, a QHS junior who has been shooting for three or four years.

“It was hard at first, but once I practiced, it got easy,” Caleb said.

Around 15 students with varying levels of experience turned out for the QHS team, with 20 at QND and “close to 50 that are interested but because of fall sports and conflicts will wait until the spring season,” Agard said. “Spring season is a lot longer than fall season and has a state tournament.”

Team members provide their gun and ammunition, and all must complete a 10-hour program on gun safety plus additional training.

“Safety’s our number one priority,” Agard said. “We want them to have fun, and we want to teach them marksmanship.”

Both teams have members new to the sport and experienced shooters — and both hope to grow.

“Come out, watch, see if it’s something you’re interested in,” said Jade, who also shoots skeet and sporting clays.

“Anybody can do it,” Agard said. “It’s a lifelong sport. I’ve shot trap with men in their 80s who still shot well. It’s something you can do for a lifetime.”

When COVID-19 put other high school sports on hold, interest grew in offering trap shooting, and Mississippi Valley was happy to help.

A QND parent approached Mississippi Valley President Glenn Sanders for help in starting a team at the school, which led to the team at QHS.

“This fit right in with Mississippi Valley’s mission to get kids engaged in the outdoors,” Sanders said.

“At both schools we’ve got a good team of coaches assembled and some volunteer experts,” Sanders said. “We look for real big things out of both high school programs the next few years.”

Along with QHS and QND, Unity High School also offers trap shooting, Sanders said, and he hopes to see the number of participating schools grow.

‘I’ve got contacts out with other area high schools,” he said. “Hopefully next year we’ll bring a lot more on board.”