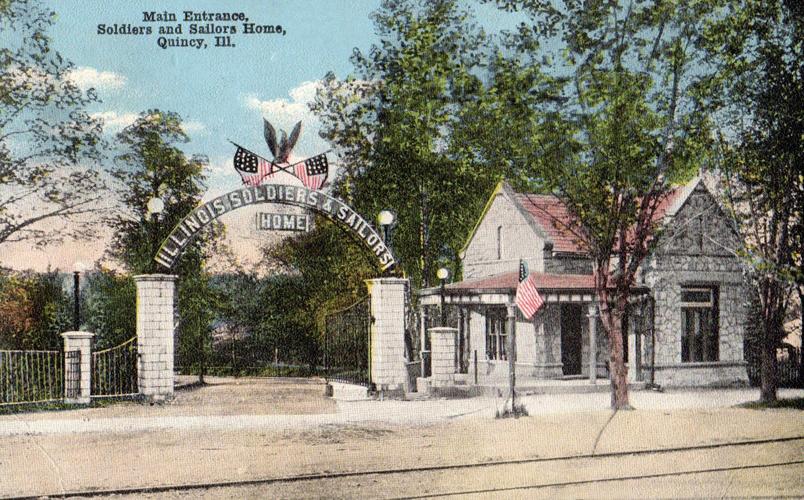 A post card of the Locust street entrance to the Soldiers' and Sailors' Home, now the Illinois Veterans Home. 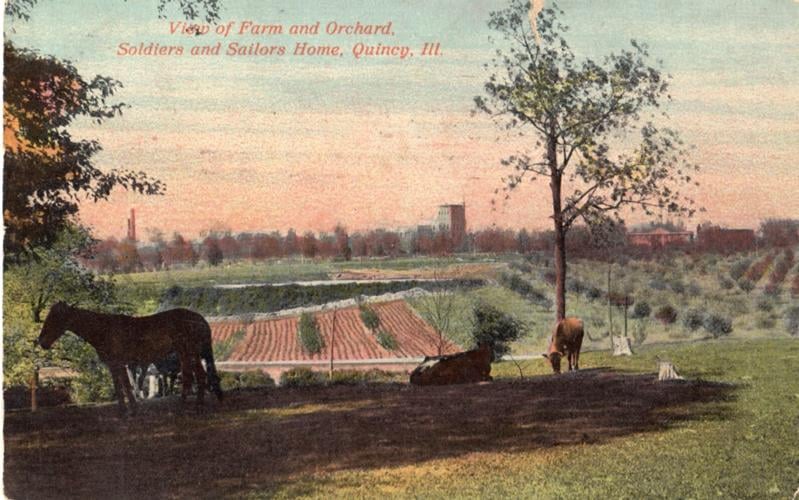 A post card showing an early view of the Soldiers' and Sailors' Home with a view of the farm and orchard.

At the annual encampment of the Illinois Department of the Grand Army of the Republic in February 1885, the State Commander stated, “I believe that the time has come for a soldiers’ and sailors’ home to be established and maintained by the State of Illinois.” The Grand Army of the Republic, a national organization for Union veterans of the Civil War, had been organized at Springfield in 1866 by Major Benjamin F. Stephenson, Surgeon of the 14th Illinois Volunteer Infantry. Article I, Section 2 of the Illinois G. A. R. declaration of principles included the following expected results, “for the protection and assistance of disabled soldiers, whether disabled by wounds, sickness, old age or misfortune….”

In 1885, 20 years after the end of the war, aging veterans were in failing health, but if unable to prove disability as a direct result of war time service, were barred from receiving a government pension. For those who could prove war related injuries, the amount of their pensions was determined based on a complicated schedule of disability. For veterans who survived the war without injury, poverty and ill health often forced them into county poor houses throughout the state. It was for these comrades that the Illinois Department of the G.A.R. developed a bill calling for an Illinois home for veterans of the Mexican and Civil Wars, which was presented to the legislature, passed in June, and adopted as law July 1, 1885.

An appropriation of $200,000 was enacted for the building of the institution, and under its provisions Gov. Richard J. Oglesby appointed a seven-member Location Commission to determine the Illinois city in which the home would be built. Col. W. W. Berry, a well-known Quincy attorney, elected Commander of the Illinois Department of the G.A.R. in 1885, was chosen as chairman of this commission.

Upon the issuance of a general invitation to apply, 42 cities, including Quincy, submitted formal proposals for consideration. In Quincy, in anticipation of the visit of the Commissioners on Location, a number of local committees, including a welcoming committee and a finance committee developed a precise plan for the visit. They raised the money necessary to escort, inform and entertain the State committee during their visit, as well as funds toward the purchase price of the property on which the home would be built.

Following visits to each of the communities in the spring and summer of 1885, the Location Committee returned to Springfield to deliberate and decide the winning city; a process that lasted nearly four months, with over 400 secret ballots being cast.

Although Quincy, Springfield, Dixon, and Decatur were favored in the later stages of the voting, none could get the needed fourth vote for a majority. Finally, on Dec. 2, the Quincy Daily Whig, reported “after taking a recess of a quarter of an hour,” the commission reassembled, “and at once Mr. Wallace, who had previously been voting for Dixon, went for Quincy, giving her the necessary four votes to secure the location.”

The selection of Quincy was met with mixed comments in the papers of rival communities. As noted by the Quincy Daily Whig, headlines announcing the vote included “FREEPORT DOESN’T FEEL BAD,” “ROCK ISLAND WAS SURE OF IT,” “BLOOMINGTON TALKS PHILOSOPHICALLY,” “DIXON WAS DISSATIFIED,” “ALTON IS INDIGNANT.” And apparently there was “GENERAL DISGUST AT DECATUR.”

The subsequent report of the Commission on Location gave ample evidence that the selection of Quincy was due, in large part, to the tract of land, the E.A. Dudley estate, which Quincy’s advocates had offered as a site for the future home.

Edward A. Dudley moved to Adams County in 1851 and purchased 160 acres of farmland and timber in Ellington Township, just north of the city limits, where he raised race horses, dairy and beef cattle, and hogs. In 1856 Mr. Dudley was elected chairman of the newly created Republican Party of Adams County.

The farm, according to a correspondent to the Quincy Daily Whig in June 1865, was “one of the most successful fruit farms I know of in the state,” with “some 500 choice peach trees, 340 apple trees, 200 cherry trees, a few plums and apricots. But his (Dudley’s) great specialty is the pear.”

The local Quincy committees had considered three properties before deciding on the Dudley farm. A parcel near 24th street, offered by one of the Dick brothers for $25,000, was deemed too expensive. A second site, belonging to General Singleton was also rejected in favor of the Dudley estate, which was offered to the city for $160/acre, less $10 per acre which the current owners would donate toward the project.

A promotional pamphlet published by the local commission extolled the healthful location and abundant natural resources of the Dudley property. It also noted the areas “accessibility” to the city of Quincy with its “extensive railroad and steamboat connections,” its natural beauty, and the “Character of Population,” which was described as “prosperous, orderly, and law-abiding.” Finally, it was noted that the site itself “contains 142 acres, divided into about 69 acres of naturally wooded park, covered with a blue grass turf and shaded by forest trees of great age, size and variety; and 80 acres of garden and arable land.” In addition, the natural elevation of the site, some 127 feet above the river, assured sufficient slope for drainage of rainwater and sewage, while the nearby city reservoir would guarantee safety in the event of fires.

The Soldiers’ and Sailors’ home in Quincy, the first in the state of Illinois, was formally dedicated in a three day celebration in the summer of 1886. Today, it’s rolling, park-like setting and meandering roadways continue to provide visitors and residents with a peaceful yet welcoming home for Illinois veterans from all branches of the services.

Illustrated Roster of the Department of Illinois Grand Army of the Republic. Chicago, 1914.

Report of the Commissioners of Location. In First Biennial Report of the Board of Trustees and Officers of the Illinois

Randolph, S. M. “Architect’s Report, No. 51 Lakeside Building, Chicago, Illinois, September 30, 1886.” In First Biennial Report of the Board of Trustees.

Lynn M. Snyder is a native of Adams County, a semi-retired archaeologist and museum researcher, a former librarian and present library volunteer at the Illinois Veterans Home, and a Historical Society of Quincy and Adams County board member and volunteer.

The Historical Society of Quincy and Adams County is preserving the Governor John Wood Mansion, the History Museum on the Square, the 1835 Log Cabin, the Livery, the Lincoln Gallery displays, and a collection of artifacts and documents that tell the story of who we are. This award-winning column is written by members of the Society. For more information visit hsqac.org or email info@hsqac.org.

This is the sixth article in a series of Quincy’s architectural or cultural gems, all of which are open to the public.

At one of the 10 most architecturally significant corners in America sits the Quincy Museum. The Quincy Museum is located at 1601 Maine and is the standing legacy of Mr. Richard Newcomb.