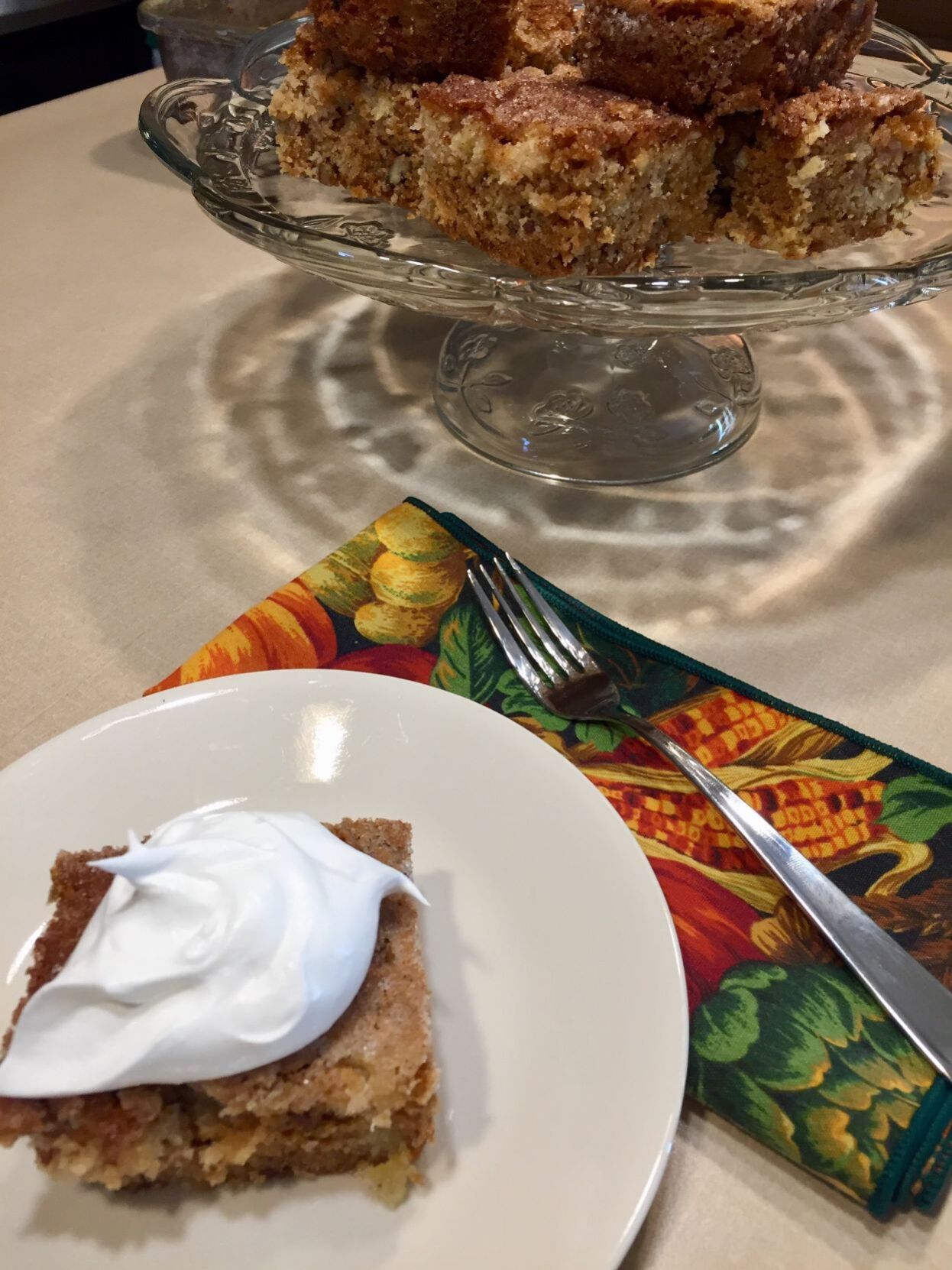 Bill Stalder serves one of his mom’s recipes, Mom’s Apple Cake, with whipped topping for dessert or plain for breakfast. 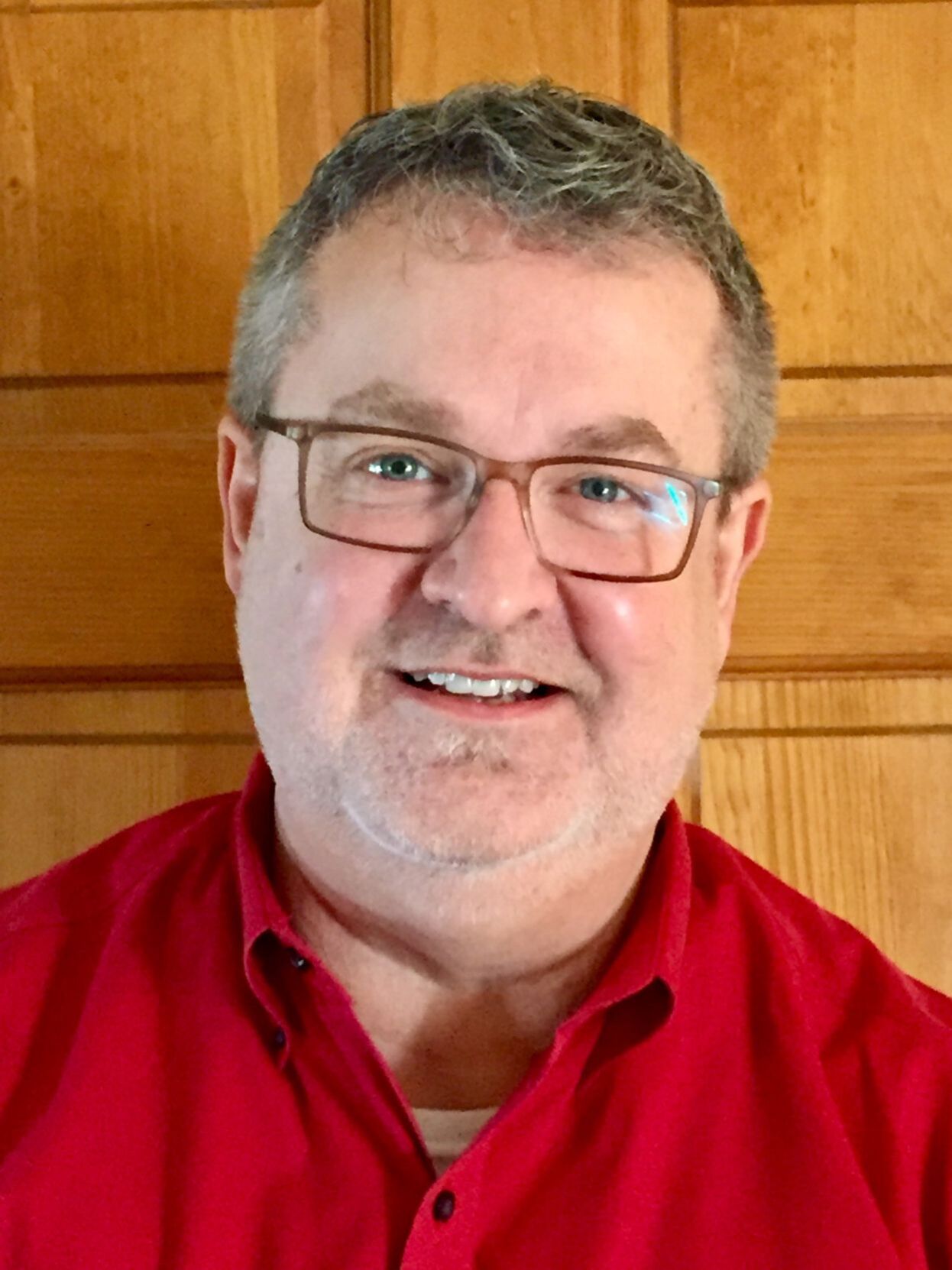 Bill Stalder serves one of his mom’s recipes, Mom’s Apple Cake, with whipped topping for dessert or plain for breakfast.

QUINCY -- Bill Stalder follows the same approach to cooking at the holidays and every day.

“My specialties are more comfort food and homestyle cooking,” the Quincy man said. “I try to keep it simple.”

Early inspiration came from watching his parents in the kitchen.

“Both my parents did their fair share of cooking. I got it from them,” Stalder said. “My dad was famous in the Maywood, Mo., area for his ham and beans and his vegetable soup.”

Another specialty, his Mom’s Apple Cake, has become a “go-to dessert” for Stalder.

Topped “with a dollop of whipped cream is how I like to serve it,” he said. “I also think it’s a great breakfast item. I’ve been known to eat a piece for breakfast.”

When it comes to mealtime, the Stalders split the duties. He does most of the cooking for the couple and younger son Quinn — older son Jay lives and works in Los Angeles and daughter Meg is a senior at Illinois State University — and his wife Brenda does most of the cleanup.

Her current favorite dinner, Easy Thai Chicken, is “more spicy flavorful as opposed to spicy hot, but you can add more Sriracha if you like spicy hot,” he said. “Cook until the meat is practically falling off the bone, get the skin crispy, garnish with fresh cilantro and chopped peanuts. It’s not only a tasty dish, but it’s one suitable for serving to company.”

But feeding the family is the top priority.

“It’s not so much looking at just preparing a meal but looking at it as feeding your family and showing your love for them through food,” Stalder said.

Just don’t expect him to follow a recipe except when baking.

“Most of mine is free-form cooking. I just kind of experiment,” he said. “Sometimes it works out. Sometimes it doesn’t.”

With the family’s busy schedules — he’s manager of marketing and member services at Adams Electric Cooperative, and she teaches at Quincy High School — planning ahead is a key ingredient in cooking.

“Cooking on the weekends and making sure there’s plenty of leftovers for during the week tends to work pretty well,” he said.

Putting a pork shoulder in the Crock-Pot on a Sunday can feed the family that day, then turn into sandwiches or pork nachos for another night along with leftovers to take to lunch.

Stalder’s known for bringing his Bill’s Baked Beans to special events at work. “They’re a sweeter baked bean than most,” he said. “The combination of the maple, the dark brown sugar, the hickory in the barbecue sauce and the little kick from cayenne sets them apart.”

Italian Beef is another crowd-pleaser, served as a sandwich with provolone cheese, and Mexican Spaghetti Squash Casserole provides a low-carb option garnished with cilantro, picante, salsa and jalapenos.

“I never thought I liked spaghetti squash,” Stalder said, but with this casserole, “the spaghetti squash takes on almost a tortilla-like texture and flavor. You think you’re getting carbs, but you’re not.”

Family favorite Coconut Cream Pie Dip caters to a sweet tooth and makes a perfect dish for a potluck.

“My favorite pie is coconut cream. This is basically the same thing only in a smaller portion,” he said. “Make the filling, put it in a pretty dish, take as much as you want with a Teddy Graham, a vanilla wafer or little strips of pie crust. Then you can have another dessert or two to try.”

1 teaspoon Sriracha sauce, or to taste

Melt butter in a large oven-proof skillet over medium-high heat. Add chicken, skin side down, and sear both sides until golden brown, about 4 to 5 minutes per side. Stir in chili sauce mixture.

Roast in the oven at 400 degrees until chicken is completely cooked through, reaching an internal temperature of 165 degrees, about 30 to 40 minutes depending on the size of the thighs. Baste with sauce, then broil for 2 to 3 minutes, or until caramelized and slightly charred.

Serve immediately, garnished with peanuts and cilantro, if desired.

1 (five- to six-pound) top or bottom round roast

Season beef with pepper, garlic powder and Italian seasoning. Roast in oven in a covered pan at 300 to 350 degrees until fork tender, usually 4 to 6 hours. Remove from pan, shred and place in Crock-Pot. Add dry salad dressing, pepperoncini peppers and beef broth. Heat on low 1 to 2 hours.

1 can black beans, drained and rinsed

Cut spaghetti squash in half lengthwise, and remove seeds. Brush with olive oil, and add salt and pepper. Roast cut side down at 350 degrees for approximately 45 minutes to 1 hour.

While squash is baking, brown onion and hamburger together in a large skillet. Drain as needed. Add garlic, salt, pepper and taco seasoning to taste.

When cool enough to handle, shred squash and place in an even layer in a baking dish coated with cooking spray. Spoon meat mixture on top of squash, and top with shredded cheese.

Bake at 350 degrees for approximately 30 minutes or until cheese is melted.

Serve with sour cream and picante sauce. Garnish with jalapeno peppers if desired.

2 cups half and half

In a medium saucepan, combine sugar and cornstarch. Add half and half and egg yolks, and whisk until well combined. Bring to a boil over medium heat, stirring constantly. Boil 1 minute. Remove from heat. Stir in butter, coconut, vanilla and coconut extract.

Pour into a medium bowl. Cover with plastic wrap directly on the filling itself to avoid a sticky film on top. Refrigerate to cool.

Bake at 300 degrees for 1 hour. Serve with whipped cream.