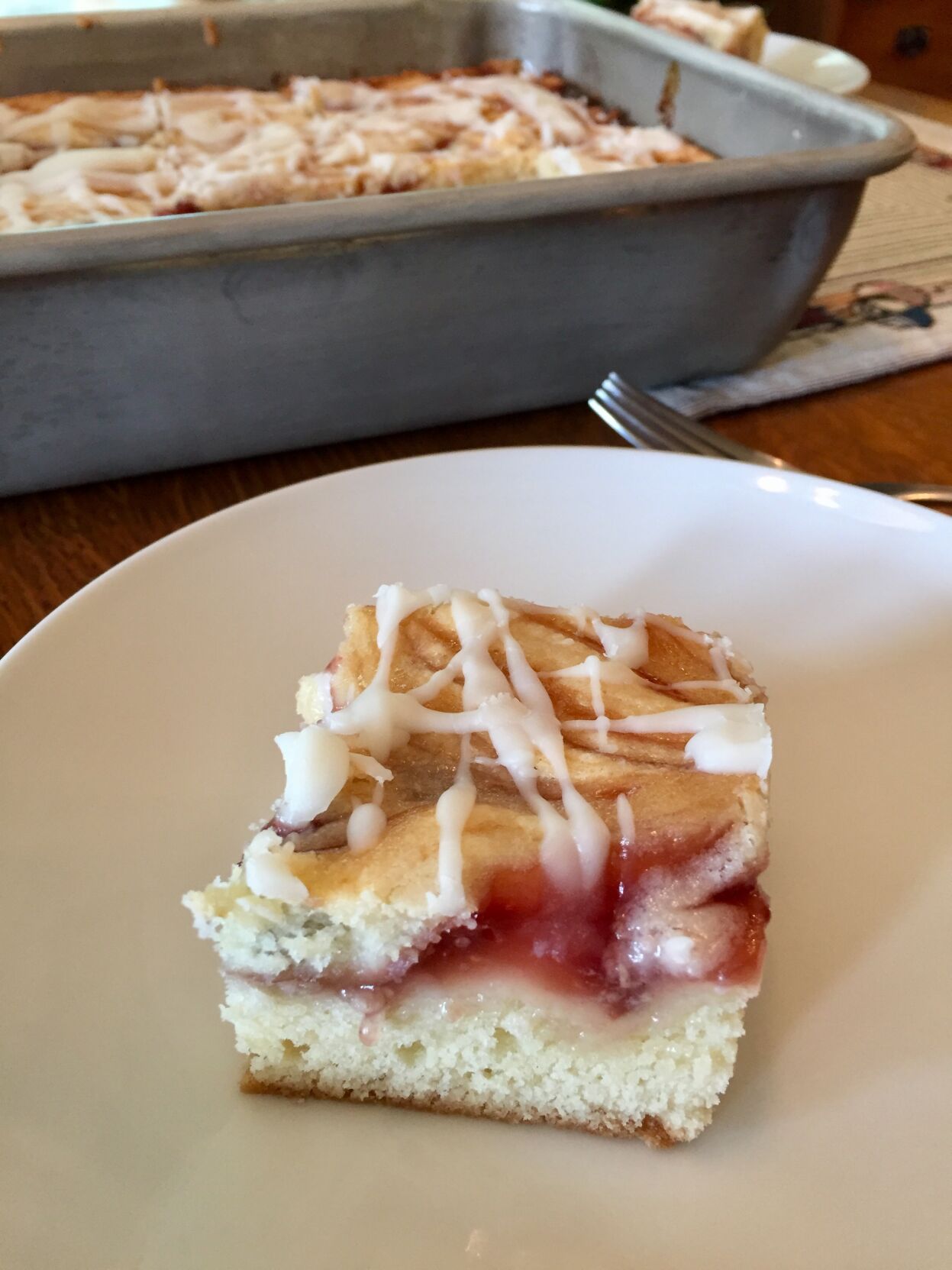 Kathy Goltz says the quick-to-fix Cherry Bars makes enough to share with friends, freezes well and reminds her of her grandmother. "This was my grandmother's recipe," she said. 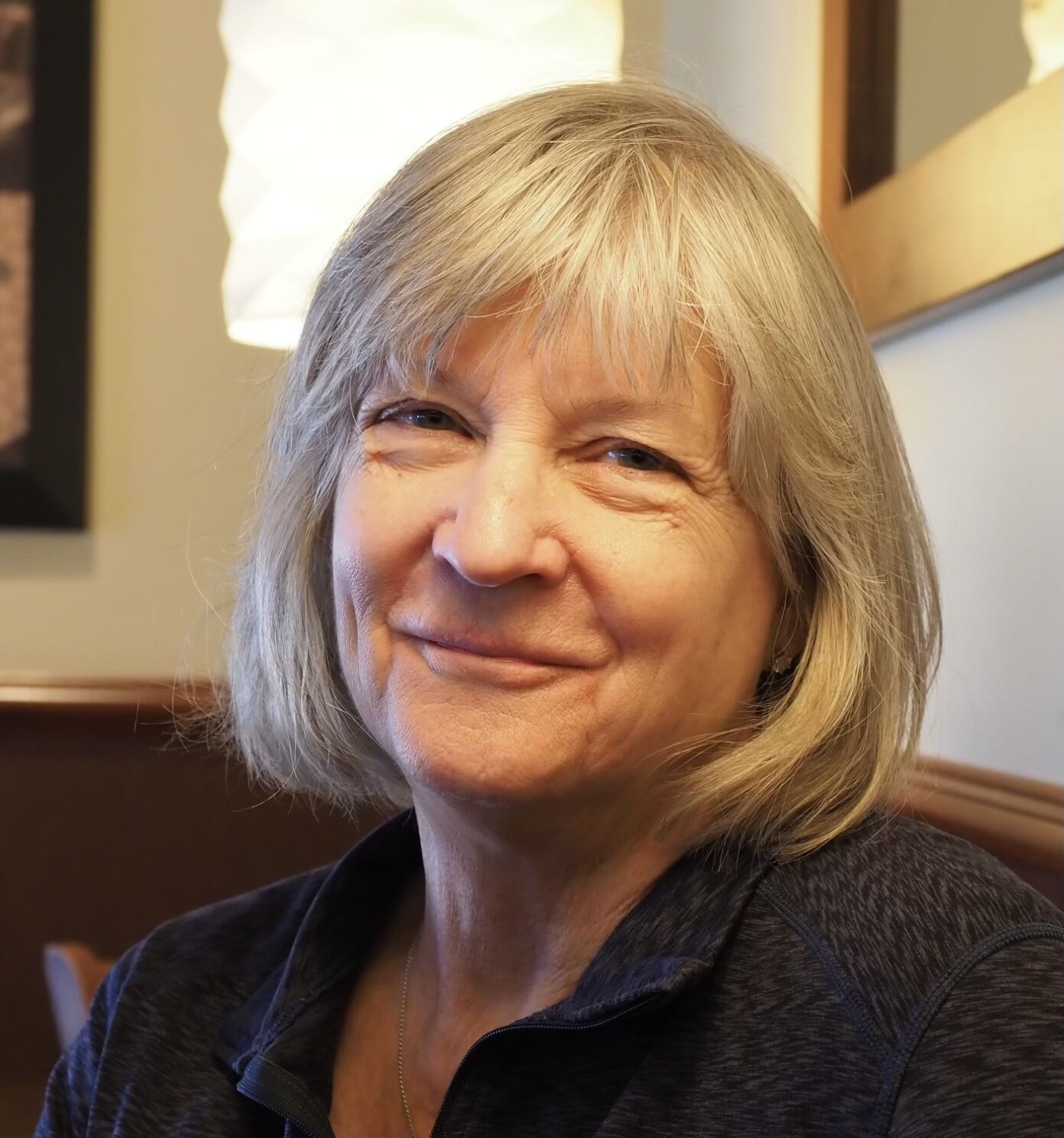 QUINCY — When the temperatures heat up, Kathy Goltz likes to cool things down in the kitchen.

“I really like cold soups in the summer,” the Quincy woman said.

Her mom’s Cucumber Soup is a favorite “especially now that summer’s coming and you’ve got all the abundance of cucumbers,” Goltz said.

“When I first made it, I looked up different gazpacho recipes and tried to do what I thought sounded best,” she said. “This one is kind of nice. You don’t have to cook a thing. Just throw it all in the blender, and you get this pretty healthy soup.”

But she’ll still turn on the oven to bake up a pan of Cherry Bars, a favorite of her husband Michael Bayles.

“This was my grandmother’s recipe,” she said. “That may be why I like this recipe so much, just remembering her.”

The quick-to-fix recipe makes enough to share with friends, and “it freezes well, too, so that’s a positive,” Goltz said.

Goltz enjoys the family connections of recipes like the soup and the bars. She follows the recipes, but “I may not be as exact as I should be with it,” she said, and with other sweet treats, “I always add way more chocolate chips and nuts than they say.”

Adding her own touch to a recipe, and trying something new, is part of the fun.

“It’s not being afraid to just do it, try it. It’s always a little bit of an adventure,” she said. “If I have people over, they’re usually my guinea pigs. A lot of cooks will try it and make sure it works before they experiment on their friends. I figure it can’t be that bad.”

Cooking magazines and their photographs inspire some of the choices for Goltz, a retired high school art teacher who paints. “Every now and then I see something that looks good,” she said. “Let’s have people over so I can try this. I enjoy the social aspect of it, being able to sit down with friends.”

Goltz prefers cooking for more than just herself and her husband, so if it’s just the two of them, they may eat out.

“Michael likes eating out, so even when I do sort of plan something, it’s let’s go out instead,” she said. “You don’t have to do anything. You just go, sit, talk and enjoy each other.”

That love of eating out inspired them to open BoodaLu Steakhouse in 2013. “He ate out a lot in his career. It was kind of knowing good food, good service, and he was bored. We’d been retired for six years,” Goltz said.

Admittedly more of a baker than a cook, Goltz lately has been enjoying salads and different sides to accompany an entrée like burgers or steaks on the grill. “I enjoy experimenting with different recipes, trying them,” she said. “Sometimes once you’ve done it once, that’s enough.”

Saute scallions and cucumbers in butter. Bring chicken broth to a boil. Add vegetables, and simmer 15 minutes. Puree in blender. Add juice from ½ lemon and sour cream along with salt and pepper to taste.

Chill before serving. Garnish, if desired, with chives or dill.

Puree all ingredients in blender. Chill, and serve garnished with chopped tomato, cucumber and green pepper.

Cream together oleo and sugar. Beat in vanilla, almond extract and eggs. Add flour. Place half of batter in a 9x13-inch baking dish. Spread pie filling over top of batter. Top with remaining batter. Bake at 350 degrees for 45 minutes. Let cake partially cool. Combine powdered sugar, butter and warm water for glaze, and drizzle over top of cake.