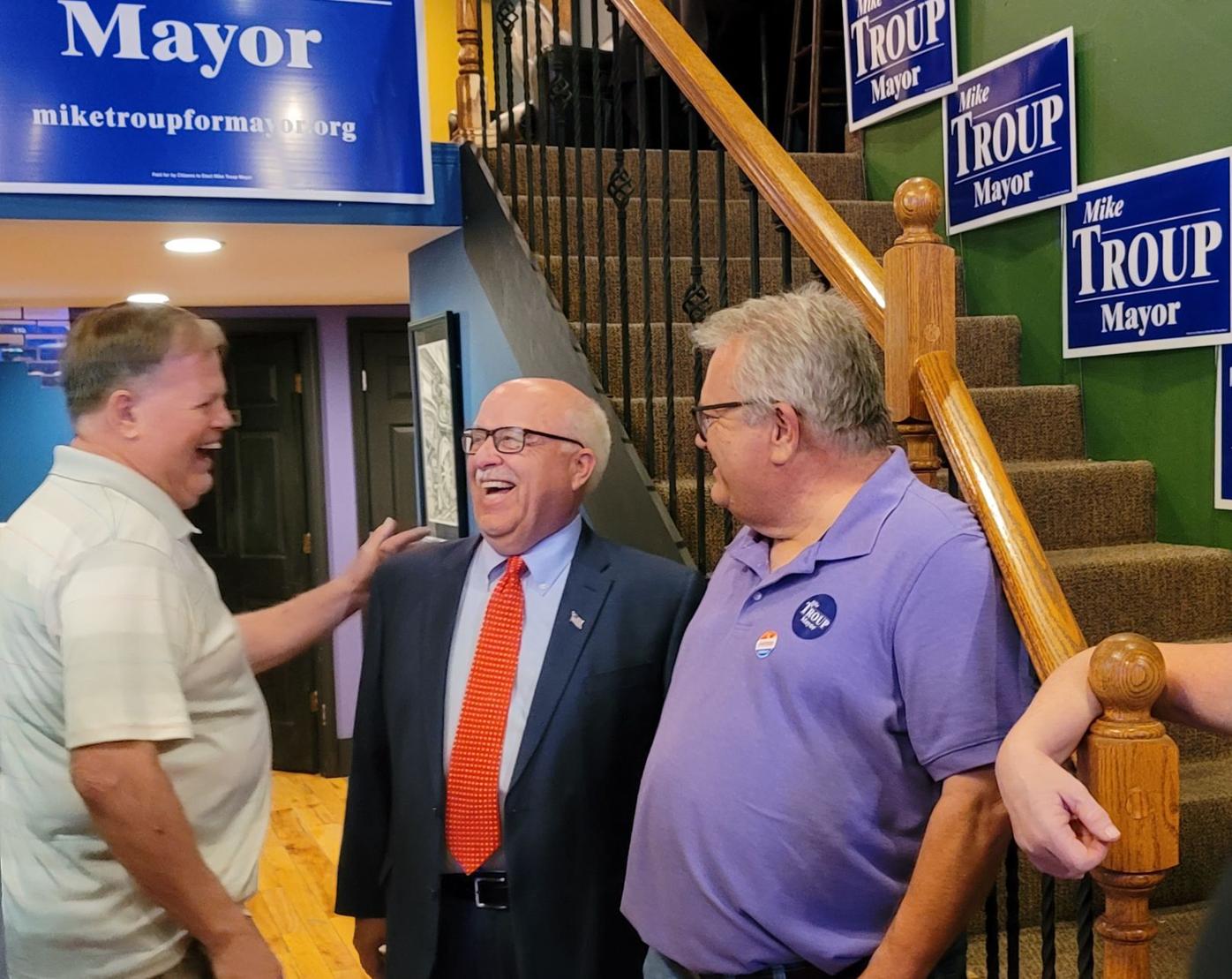 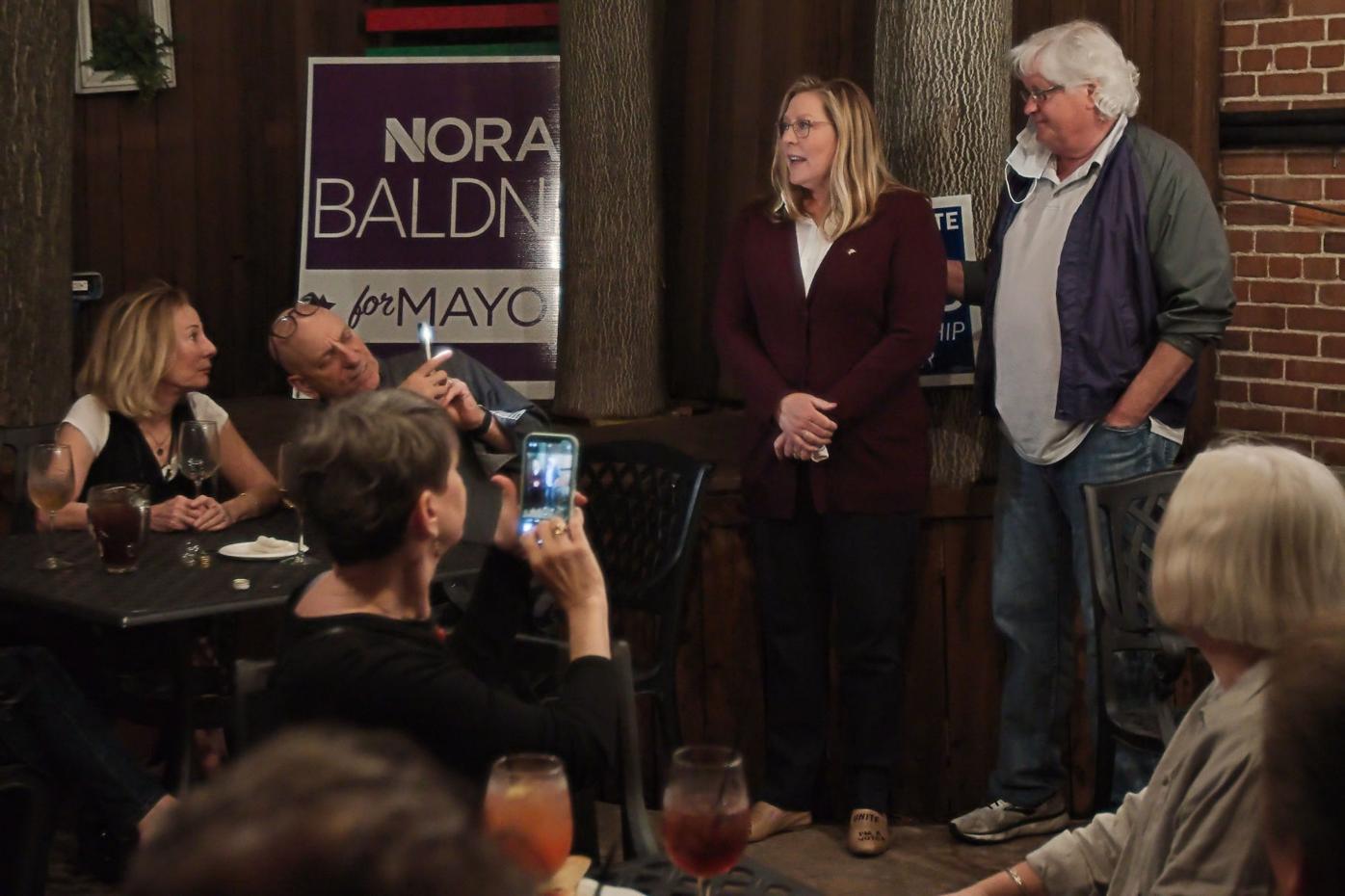 QUINCY — The atmosphere of Revelry on Tuesday night was joyous once the dozens of attendees received the unofficial word Republican Mike Troup would be the city’s next mayor.

The Quincy Public Schools board member defeated Democratic candidate and Quincy University assistant professor Nora Baldner in Tuesday’s election. Troup announced his projected victory about 8 p.m. based on data collected from various polling places, but he clarified the results he gathered were not verified by Adams County Clerk and Recorder Ryan Niekamp.

Later in the evening, with all precincts reporting, the Adams County Clerk’s Office reported Troup defeated Baldner 4,954 to 3,179.

Troup said as mayor-elect he will meet with the city’s aldermen to identify the priorities of each ward. He then will share his own priorities, including infrastructure, public safety and job creation, which Troup said has the longest ramifications for the city.

“I think that growth is really critical for Quincy,” Troup said. “We’re in a unique situation as a community where we have our large industries in various categories: manufacturing, health care, etc. And none of them can find all the skilled workers that they need to fill the openings that they have today.”

The mood at Nora Baldner’s election night gathering was only mildly diminished as word of the results came through. Those who were gathered on the back patio of the Taproom & Cafe were in good spirits, saying they felt they had accomplished something with the campaign.

It was a sentiment Baldner echoed.

“I’m so proud of everyone that came out, that volunteered, that came out for our campaign,” Baldner said following a phone call with Mike Troup. “We came out, not just to try and get the office, but to make a change for the community.”

Troup campaigned on 34 years of government experience in Adams County and 20-plus years in business to manage the city.

Troup said Quincy has so many assets and some great people, and when you have so many people coming from Chicago to get a COVID-19 vaccine, there’s opportunity to promote that.

“We’ve got openings in a variety of positions and affordability is awesome here, especially when you compare it to Chicago, St. Louis, Kansas City, Indianapolis, etc.,” Troup said.

As the mayor-elect, Troup will be allowed to attend Adams County emergency operations meetings, Adams County Together Task Force meetings, briefings on emergency management procedures and best practices, briefings with state and federal agencies such as the Illinois Department of Transportation and reviews of every department with status updates of ongoing projects.

Baldner said she plans to continue working for what she feels are essential changes at the city level, including advocating for a housing inspection program throughout the city to improve on the fix-or-flatten program.

Following words of thanks and recognition for key campaign members, including campaign manager Coburn Gillies, Christine Ledbetter and Brian Kroeger, Baldner reiterated her campaign was just the beginning of the conversation.

Asked about future plans, Baldner said the immediate future is a return to the classroom as an assistant professor in the communications department. As for another run for office, Baldner said she hadn’t given it much thought.

“But you never know,” Baldner said.

Two of three Quincy aldermen running in contested races in Tuesday's election will keep their seat.