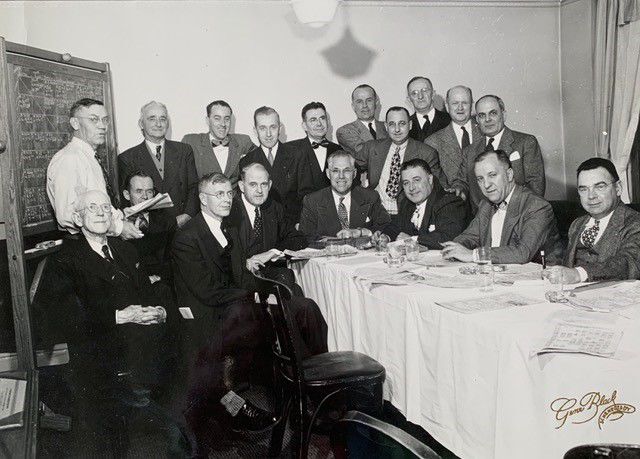 Floyd Smith stands at a blackboard while consulting with owners and officials from the Canadian-American League, among them Lee Riley, who represented the Schenectady Blue Jays and was the father of NBA Hall of Fame coach Pat Riley. 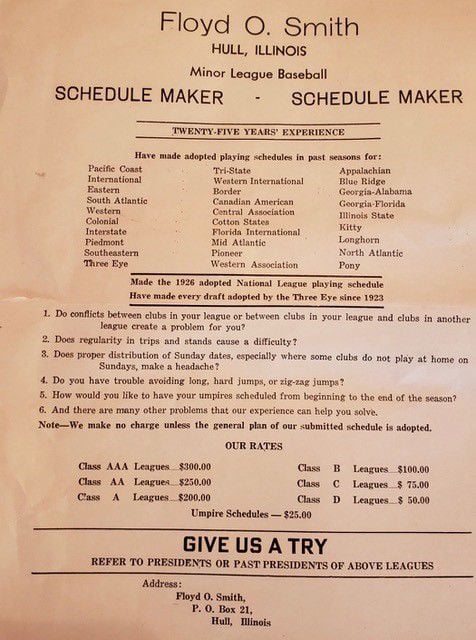 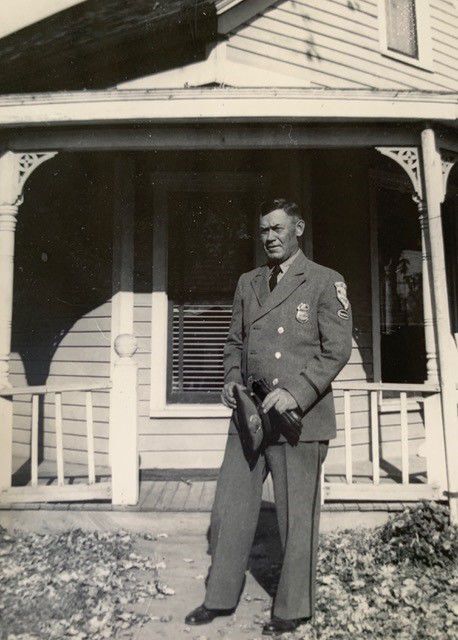 Floyd Smith in uniform as the first commander of the American Legion post in Hull, Ill. 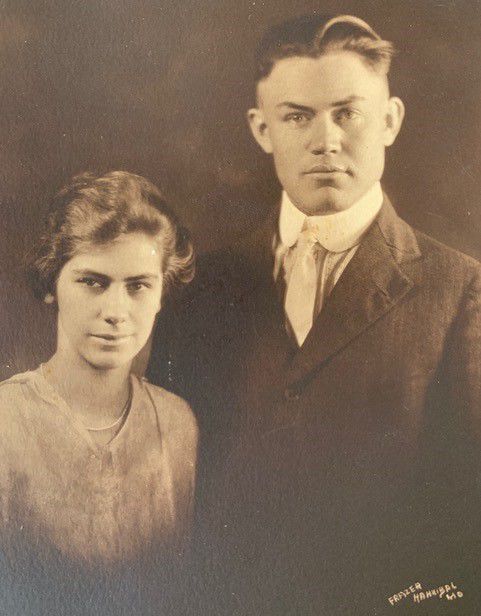 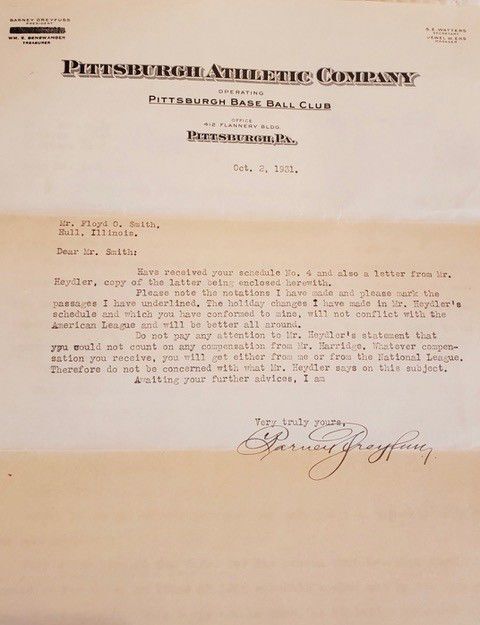 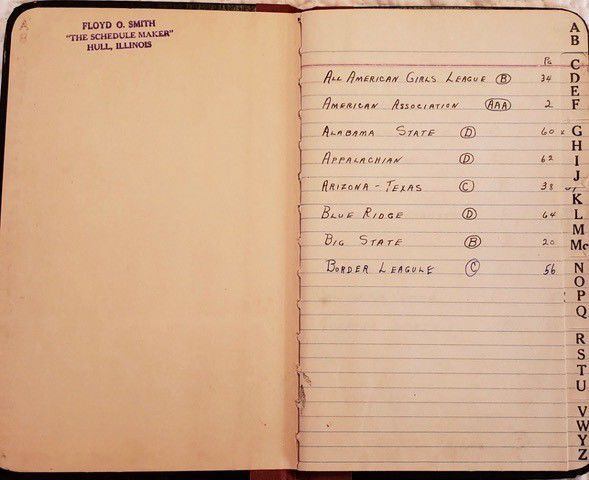 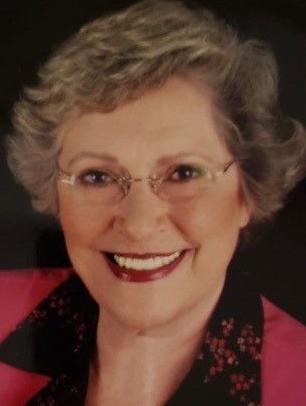 Floyd Smith stands at a blackboard while consulting with owners and officials from the Canadian-American League, among them Lee Riley, who represented the Schenectady Blue Jays and was the father of NBA Hall of Fame coach Pat Riley.

Floyd Smith in uniform as the first commander of the American Legion post in Hull, Ill.

HULL, Ill. — Located just a few miles from the Mississippi River, this small town has been menaced by flooding since its beginnings in the 1800s. After the Great Flood of 1993, Hull never recovered from its devastating losses.

Partly as a result of the flooding and partly because people left for higher paying jobs elsewhere, Hull’s population has declined from a high of 648 in 1920 to today’s roughly 400. Few businesses remain in a community once home to grocery stores, restaurants, barber and beauty shops, a movie theater, motel and two grain elevators, as well as Chevrolet and John Deere franchises.

Yet Hull’s elders recall with pride a native son who died nearly 70 years ago. Floyd Smith, a quiet, modest schoolteacher, was known nationally as baseball’s “The Schedule Maker.”

Back before baseball schedulers were aided by computers, Smith sat upstairs in his home office devising team schedules for up to 33 professional leagues per year from the 1930s through the early 1950s. In 1941, he scheduled more than 25,000 playing dates, from the Triple-A Association to the youth Pony leagues.

It began as a hobby in 1910. At 17 as a Hull High School student, Smith was interested in baseball and mathematics. He reworked a schedule for what was then the Central Association, a minor league that included the Quincy Gems and Hannibal Cannibals. “I took other schedules and tried to re-arrange them to make them more adaptable, both to the players and the club owners,” Smith said in a 1948 Associated Press story. “It was like solving a crossword puzzle.”

In 1923 his schedule was approved by the Three-I League, the Illinois-Indiana-Iowa minor league organization. He continued working with the league from then on.

“In the minor leagues of the 1920s and ’30s, the job typically fell to each league’s president — and whoever volunteered to help — to come up with their own schedule for the season. Occasionally, they found someone capable and willing like Floyd Smith ... to whom they could outsource the job, since coming up with a schedule that pleased all teams was one of the most important duties of the league office at that time,” said Jacob Pomrenke, editorial content director for the Society for American Baseball Research.

In 1925, Smith met Barney Dreyfuss, owner of the Pittsburgh Pirates and an executive in the Major Leagues. The two became friends, and in 1926, the National League adopted Smith’s chart. That was the year the Cardinals won their first national pennant, a source of pride for Smith. For the next 10 years, Dreyfuss would send Smith schedules to devise or fix.

Drafting schedules was complex and complicated work in those days. Blue laws prevented some teams from playing home dates on Sundays. Others avoided playing on holidays. Players traveled by train or bus, requiring consideration of transportation schedules and travel times. Often minor league teams played on municipal lots, competing with community events, such as fairs and picnics. And a schedule maker always tried to ensure that each team travel about the same distance and frequency, which depended on the cities’ locations. It was harder to do that with Tacoma than St. Louis.

Smith started by drawing a box form, sometimes on a blackboard, with the team names across the top and down the left side. He filled each square with dates. He submitted a draft to the league, which would then note changes to be made.

For most of his life, schedule making was a part-time job. Smith taught all subjects in Payson and Hull schools for 25 years, then quit to manage a grain elevator.

“He could see far ahead,” says farmer Dale Meyers, 92. “He was a very nice man, and dealt fairly with the farmers.”

Smith left the elevator job in 1948 to devote himself full-time to schedule making. And though an ardent baseball fan, he typically saw only a few games each season because he was so busy drawing schedules. “My job is to tell them where and when to play, not to watch them,” he told a reporter.

His niece, Martha Reed Garvin, 83, remembers Floyd and his wife, Vivian, leaving their son, Kenley, who had Down syndrome, with her grandmother. The couple would take the train to Chicago, where they would dine with William Wrigley Jr., the Cubs owner and chewing gum magnate, or meet with Pittsburgh’s Dreyfuss.

The couple led relatively cosmopolitan lives. They traveled for banquets and baseball league meetings, staying in hotels such as the Commodore in New York City or Lord Baltimore in Baltimore.

At the time Hull’s radius encompassed only about 20 blocks. But it was a vibrant, harmonious community where on Saturday nights, people drove to the village square early before the movies started. “The men would get out of their cars to talk, while women chatted with each other from the vehicles,” says fifth-generation farmer, Jim Reed, 83.

It was a close-knit community. “Everyone knew everyone. You never locked your doors. You knew what my kids were doing; I knew what yours were doing,” says Fannie Lou Gray, 95, whose father-in-law employed 90 people at the Farmers Elevator and the Deere and Chevrolet franchises.

The Smiths were integral members. Vivian, a pianist, performed at almost all of Hull weddings and celebrations. Kenley, who was quite social, cheerfully delivered mail and groceries to elderly widows.

Smith organized and chartered the American Legion post in Hull, and was its first commander. Under his leadership, the group secured a physician and built a bowling alley for the town.

To the folks who remember him, Smith’s legacy stretches beyond “the schedule maker.” In the town’s 1971 Centennial publication, he was honored for preserving town records and historical documents. A WWI veteran, he also edited a bimonthly newsletter sent to all Hull servicemen during WWII.

Enlisted by the Hull’s Servicemen’s Club, Smith wrote lengthy letters noting the community’s births, deaths and weddings. He also recounted news as small as when a citizen had tonsils removed or dined with others on Sundays. He wrote about neighbors helping each other such as, “Ollie Brinkman was in dire straights,” having punched a hole in the bottom of her teakettle. “When Mrs. Anna Carter, good neighbor that she is, read this, she found she had opportunity the very next day to get it mended while in Quincy. Now Ollie is quiet again, and quite her former self.”

He provided enlisted men’s addresses, and included excerpts from their letters. In all, he sent out 75 bulletins from December 1942 to January 1946, comprising 712 single-spaced typed pages.

The bulletins, sent with cookies, cigarettes and Saturday Evening Posts, embodied Smith’s folksy wisdom. In one, he wrote: “The only motive of this club is just what its name indicates ‘Service.’ That’s a great motto in war or in peace. In fact, is there any excuse for a person’s existence except that he is of service to man? We are all human and contain too much of selfishness but, if our philosophy is right, unselfish service is the measuring rod of our likeness to the Great Teacher and Example.”

The family lived in a little wooden house near the railroad tracks. Nephew Ron Smith of Bend, Ore., 85, recalls visiting them from Quincy. “Uncle Floyd was congenial with children — unusual to me when most adults never seemed to pay much attention to us. It was natural to spend time with him.

“Many times I’d walk with Uncle Floyd near the tracks.” One time his uncle laid a penny on the track before the train came by. “I kept that penny for a long time.”

Only a few years after devoting himself full-time to sports scheduling, Floyd became sick. After lengthy hospital stays in Quincy and St. Louis, he died of cancer in 1952, at age 58. “He was laid out in the family home, I recall there were many townspeople who came that evening,” said nephew Nelson Smith, 81, of Quincy.

Niece Garvin remembers that Kenley did not want his father’s body removed from the house for the service at the Baptist Church, which was full to capacity. At Vivian’s instruction, the 13-year-old Garvin and a cousin were flower girls at the service. They walked in front of the procession carrying flowers, and then placed the bouquets on either side of the casket.

The widow and son remained in Hull. Vivian can be seen in archival videos at the annual picnics, always elegant, her hair sometimes swept up in a chignon. “Fate put me in Hull,” she said to an interviewer in 1981. “But I don’t know I would have wanted to live anyplace else.”

As she aged, she worried about Kenley’s future, and so she turned to Garvin. “I was the girl cousin when Aunt Vivian needed an executor for Kenley’s estate,” says Garvin, who lived in Chicago with her family, but whose hymn-based syndicated television program “Musical Memories” was filmed in Quincy. She drove to Quincy monthly to film the broadcasts at WTJR-Christian Television.

“I visited Aunt Vivian just a few days before she died; she had cancer. She knew she was dying and wanted to talk to me, and make sure Kenley was OK. I arranged everything before she died,” Garvin says.

After Vivian’s death in 1986, Kenley stayed in the family house. “When his mother died, he missed her very much, but the people of the town all watched over him,” wrote Joseph Butters in his Hull history and memoir, “All in All.”

Kenley worked at an activity center in Pittsfield, Ill., and was supervised by one of Garvin’s brothers.

Meanwhile, the Mississippi River, as always, continued to threaten. “The waters would rise every so often and people would say, ‘It’ll be OK. It’s always been OK.’ And then it wasn’t,” says Reed.

When the Sny Levee broke in 1993, Garvin swooped in to rescue what she could from Smith’s antique-filled, water-drenched home. “Even the bank in Hull flooded; Aunt Vivian had a lockbox there, and the papers were wet; I put them in the freezer,” says Garvin. The papers were house deeds, necessary for payment from FEMA before the house was demolished.

She also found a box filled with memorabilia that Vivian had collected celebrating her husband’s career.

Like so many others, Kenley left Hull after the flood, staying with family. He eventually moved to a Palmyra, Mo., nursing home, where he died in 2016 at the age of 81.

Meanwhile, Garvin had relocated from Chicago to Franklin, Tenn. For 34 years, she kept Vivian’s box, which she had never examined, on a top shelf in her closet. When asked about its contents in November, she and her son, Brad Garvin, a furloughed Metropolitan Opera singer, finally opened it.

There is also a red-and-black leather notebook filled with page after page of meticulously crafted schedules, written in tidy, tiny handwriting.

The inside cover is stamped with Floyd’s name along with the moniker for which he will always be known — “The Schedule Maker.”

Christine Ledbetter is a journalist who has worked at the Washington Post, Minneapolis Star-Tribune, Chicago Sun-Times and the Detroit Free Press. She lives in Pike County, Ill., where she writes articles that interest her.