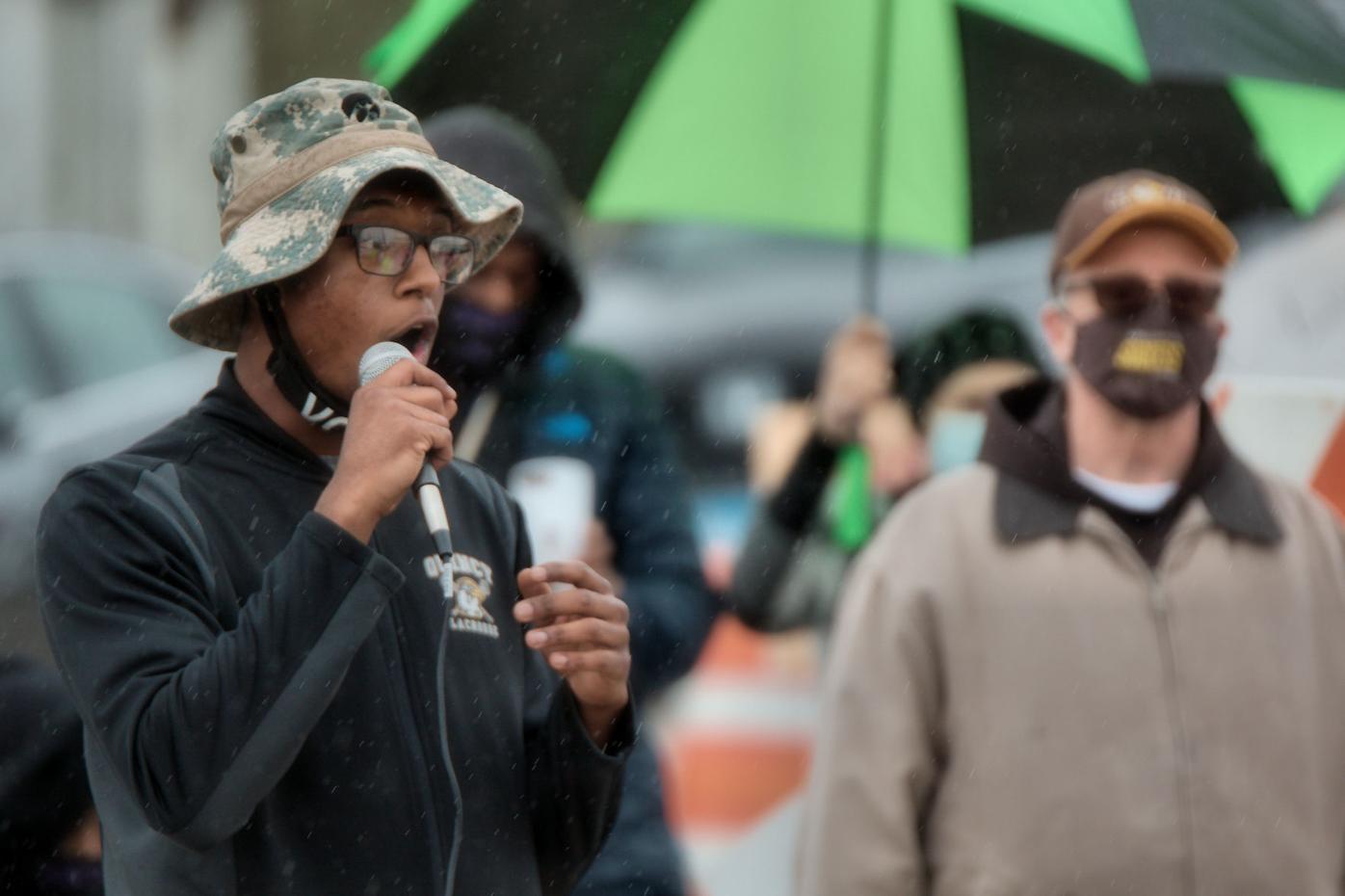 Quincy University student CJ Cunningham addresses the crowd Thursday, April 8, 2021, at South Front Street and Payson Avenue in Quincy. The crowd was part of a protest organized in response to the reported assault of QU student Jazzpher Evans at the Barn nightclub over the weekend. 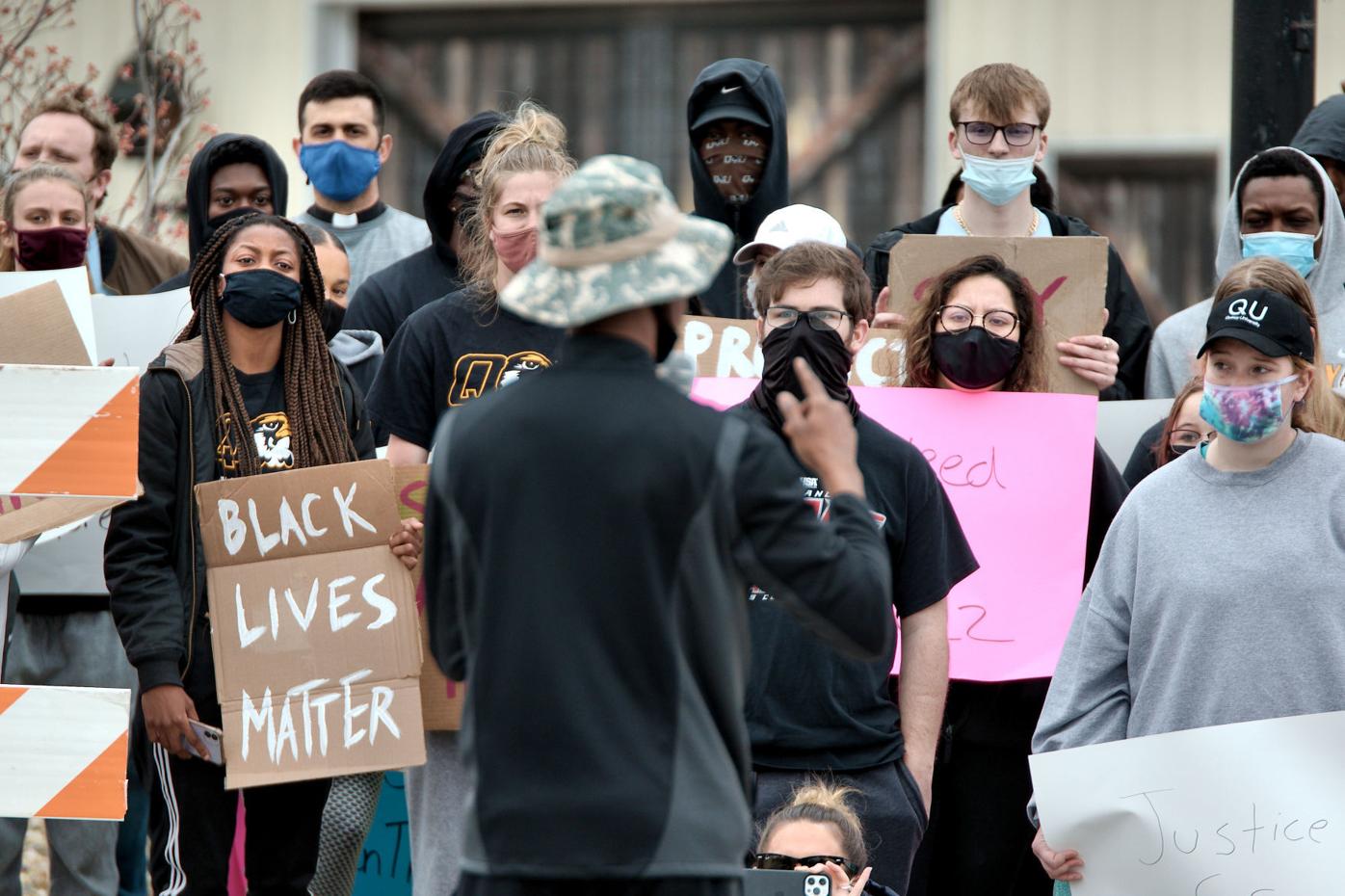 Protesters filled the corner at Front St. and Payson Ave. in Quincy Thursday afternoon. The protest was organized in response to the reported assault of QU student Jazzpher Evans at The Barn nightclub over the weekend. 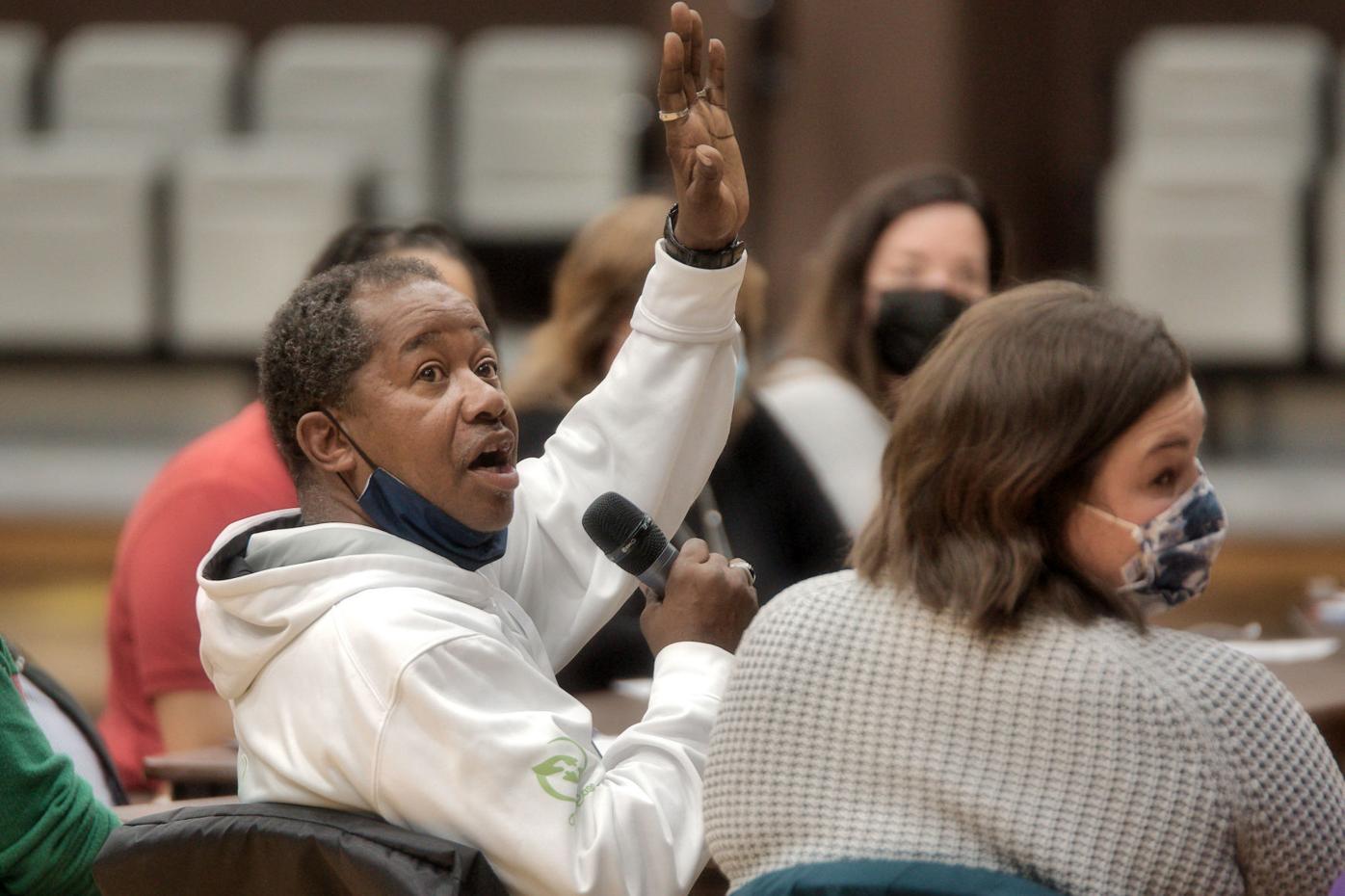 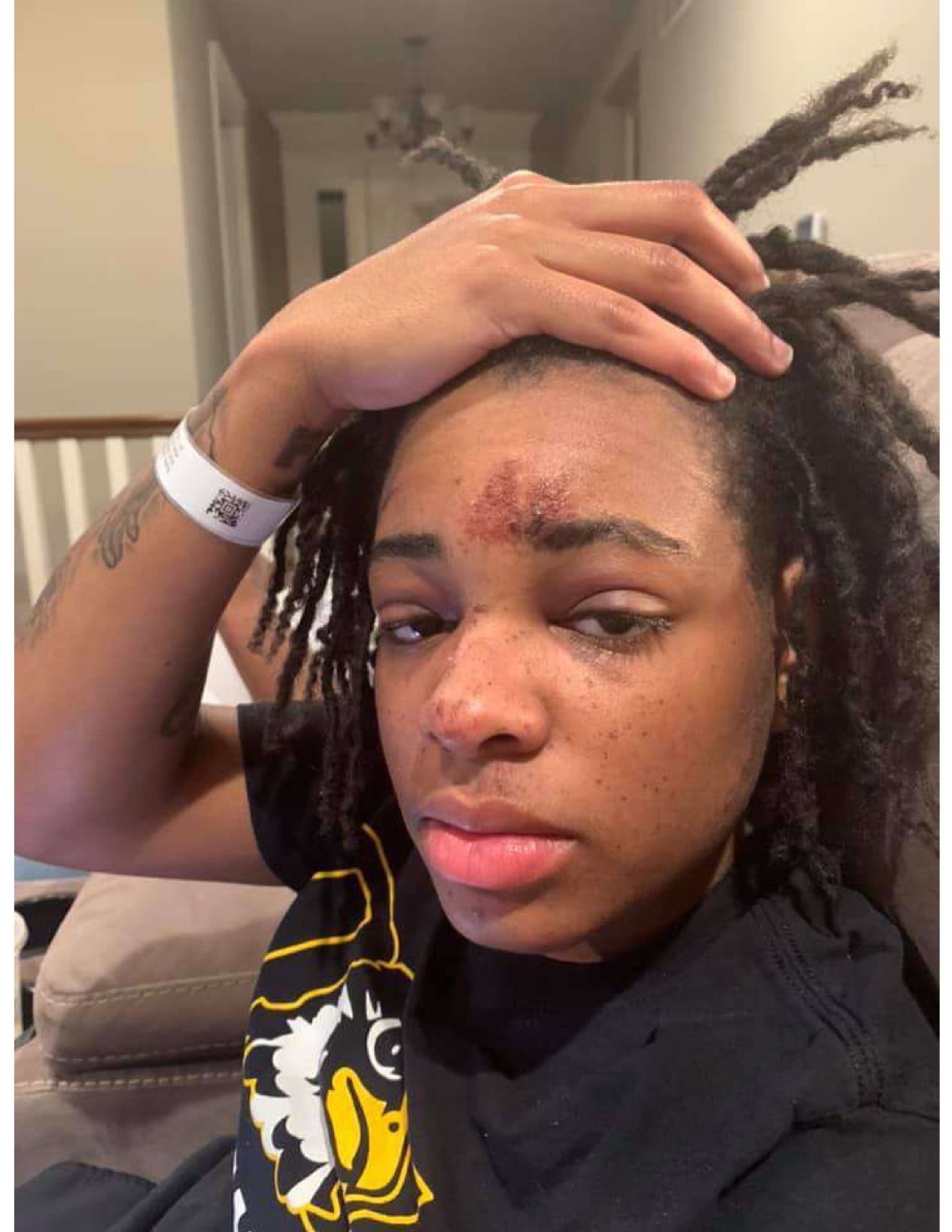 Quincy University student Jazzpher Evans shows bruises to her face in this photo provided by her attorney. Evans says she received the injuries from an assault at the Barn nightclub in Quincy.

Quincy University student CJ Cunningham addresses the crowd Thursday, April 8, 2021, at South Front Street and Payson Avenue in Quincy. The crowd was part of a protest organized in response to the reported assault of QU student Jazzpher Evans at the Barn nightclub over the weekend.

Protesters filled the corner at Front St. and Payson Ave. in Quincy Thursday afternoon. The protest was organized in response to the reported assault of QU student Jazzpher Evans at The Barn nightclub over the weekend.

QUINCY — It started as a gathering of about 30 people Thursday afternoon at the First Baptist Church.

It evolved into a 50-person peaceful protest on the corner of Front Street and Payson Avenue outside the Barn nightclub.

And by the time an emergency meeting of the Quincy Human Rights Commission was called at 6:30 p.m., about 300 people were in attendance to show their support for Quincy University student Jazzpher Evans, who was reportedly assaulted at the Barn, 711 S. Front St., over the weekend.

Evans, a 19-year-old freshman from Joliet who is a guard on the QU women’s basketball team, described the incident to Chicago area media Thursday morning at a Joliet church with her family and their attorney at her side.

Evans said she and another QU student were standing near the DJ booth to request a change in the music when a man approached her and shoved her against the wall. Evans described being thrown to the ground and placed in a choke hold. She said she lost consciousness and woke up outside.

The Quincy Police Department has asked witnesses to come forward with information regarding the incident.

The department is working with the Adams County state’s attorney’s office in what has been described as a “complex investigation.”

The Herald-Whig has requested an interview with Evans through her attorney Keenan Saulter, who said he was unsure if she would be up to talking following the press conference.

During the rally at the First Baptist Church, QU Black Student Union leader CJ Cunningham urged attendees to maintain civility throughout the protests.

“We do not want anything that’s going to be retaliatory. We don’t want anything to be started,” Cunningham said. “This is not about that. We’re just trying to be here to get justice in the most civil, respectful way we can.”

QU graduate student Ben Frazier said he came because once he heard about the incident he knew it was a part of a very serious issue.

“Maybe more important than that, it was something that needed to be addressed and people needed to show and the community needed to show that they care about it and are willing to show how they feel about it,” Frazier said.

The Rev. Tony Metz, pastor of the Luther Memorial Church, said the community needs to take a clear stand against violent incidents.

“There needs to be justice in cases like this or we will see more of it and people in our community won’t feel safe, and people need to feel safe in their own community,” Metz said.

About 50 people stood outside the Barn in the rain waving signs that read “No Justice, No Peace,” “Students Against Hate” and “Black Lives Matter.”

Quincy police officers parked across the street to monitor the situation.

As the events unfolded and the Human Rights Commission learned of the passionate response and the desire of so many to be heard, its planned emergency meeting, which had been scheduled to take place in a room at the Oakley-Lindsay Center, was moved to Pepsi Arena on the QU campus.

Shawna Mack, Evans’ cousin who drove from Joliet-Kankakee area to attend the commission meeting, said those in attendance were there because they were affected by what happened to Evans.

“We love (Evans), and whether it’s near or far, we stand with you and the battle is already won,” Mack said.

Although some attendees probed the police department for answers, Quincy Police Chief Rob Copley said he cannot comment on the investigation, but he assured the public the department does care about everyone in the community.

Deputy Chief of Operations Shannon Pilkington added there are two investigations: one into the reported assault and one into a liquor license violation for serving underage customers.

Following public comment, the Human Rights Commission read a proclamation calling on residents to show patience while the complaints are being investigated and to contact the Quincy Police Department with any relevant information related to the incident.

“We ask that residents please show understanding, respect and acceptance to those who may be different from themselves,” the proclamation read. “In Quincy’s history, we are known by many as a city of refuge. We should continue to be a place where everyone feels welcome, supported and safe.”