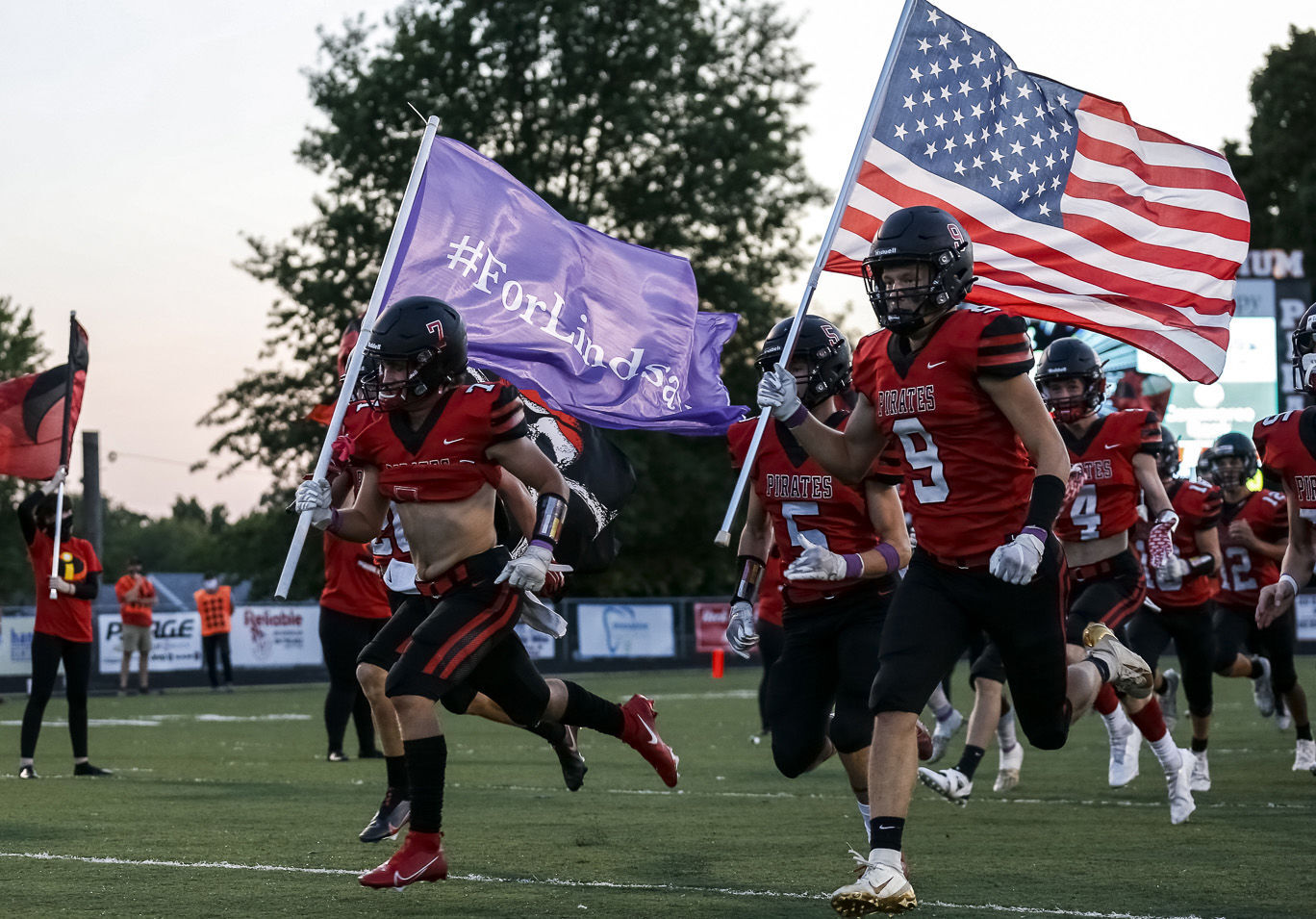 Hannibal junior safety Kaiser Greenwell leads the Pirates onto the field for a game against Mexico at Porter Stadium earlier this season. Greenwell is carrying a #ForLindsay flag, honoring his mother, Lindsay Greenwell, who passed away August 5 after battling rectal cancer. 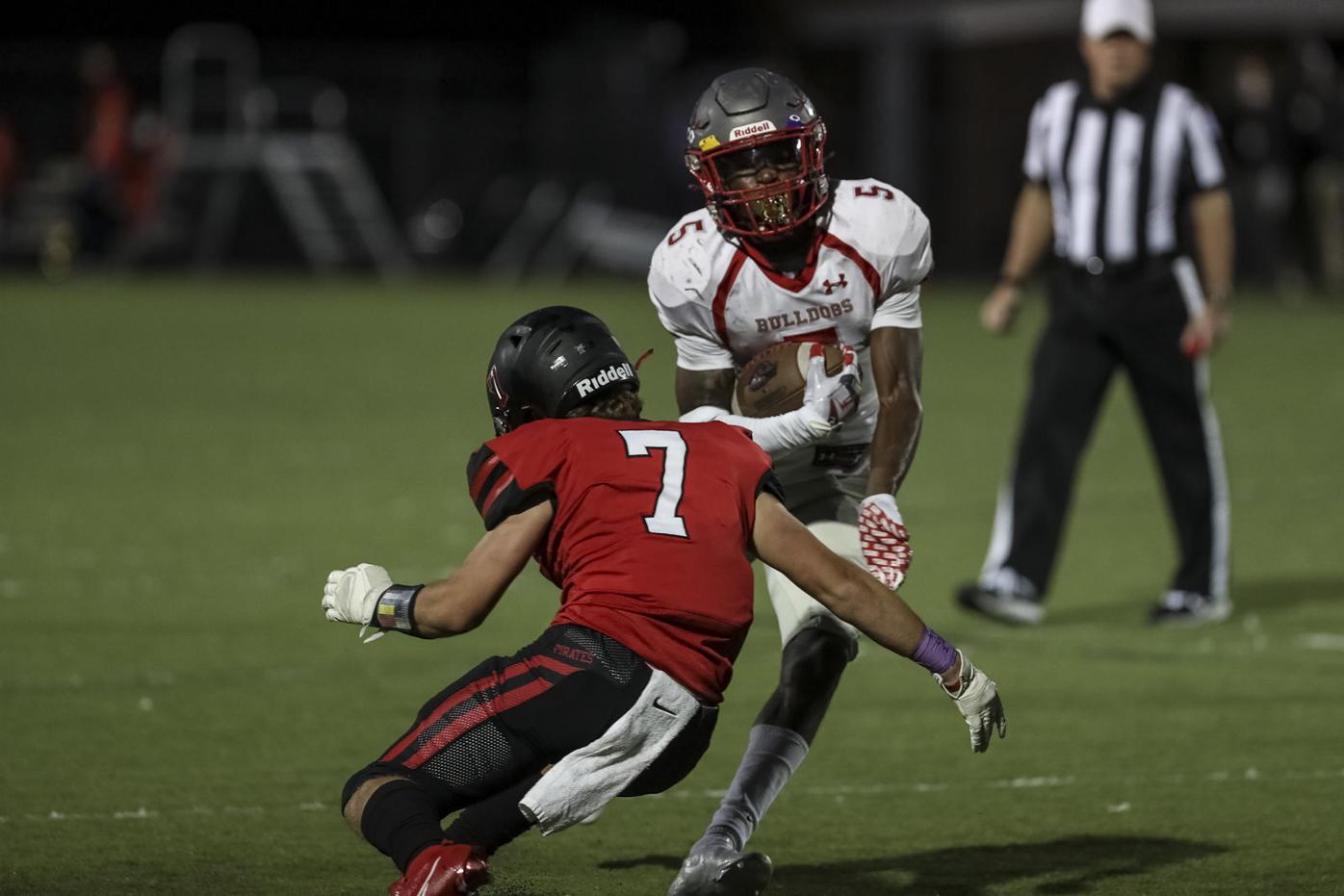 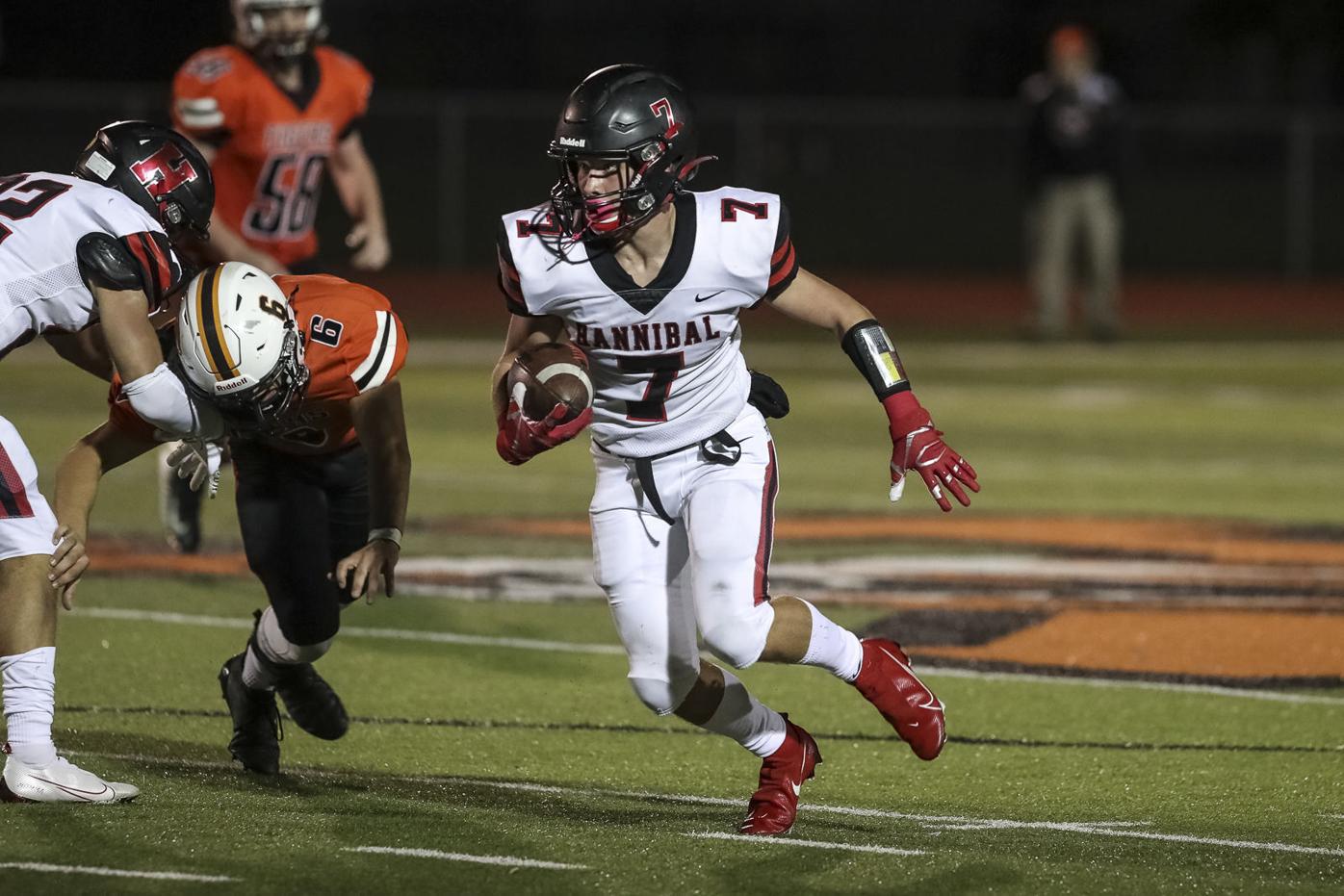 Hannibal’s Kaiser Greenwell looks for running room after catching pass during a game against Kirksville during the regular season.

Hannibal junior safety Kaiser Greenwell leads the Pirates onto the field for a game against Mexico at Porter Stadium earlier this season. Greenwell is carrying a #ForLindsay flag, honoring his mother, Lindsay Greenwell, who passed away August 5 after battling rectal cancer.

Hannibal’s Kaiser Greenwell looks for running room after catching pass during a game against Kirksville during the regular season.

There will be a moment just before kickoff Saturday when the clamor throughout Porter Stadium is reduced to take-a-deep-breath anticipation as coaches adjust their headsets and the kick and return teams gather on their respective sidelines.

Just before that, four Hannibal football players will walk to the 16-yard line and each take a knee.

“It’s a moment of silence,” junior linebacker Braysen Douglas said. “Maybe say a few things to whoever you need to say something to. It’s a quick 15 seconds and then it’s time to go to work.”

Like always, Lindsay Greenwell will be at the forefront of their thoughts.

These are her boys, literally and figuratively.

Her son, Kaiser Greenwell, is a junior safety who earned second-team All-North Central Missouri Conference honors this season and is part of a defense that has allowed just two touchdowns this postseason. The other three – Douglas, Hardy and junior cornerback John Clubine – are what she called her “second sons.”

“My mom loved them all,” Kaiser said.

So they honor her together. Always on the 16-yard line.

Sixteen was Kaiser’s jersey number last year when he earned a starting spot in his first varsity season and the only number his mother saw him wear.

“I put that jersey with her when we buried her,” he said.

“Seeing him do that makes me have more respect for Kaiser and the love he has for her,” Hardy said. “Yes, that’s her number.”

Lindsay Greenwell passed away August 5 following a battle with rectal cancer. She was 40 years old, leaving behind a husband, Ron, who coached most of the players on Hannibal’s varsity football team at the middle school level, and two children – Kaiser and Joely, a seventh grader.

Lindsay’s funeral coincided with the first day of football practice, so everything the Pirates planned was put on hold. The team attended the services as honorary pall bearers, and they helped the family shoulder their grief.

They refused to let him go through it alone.

It became a reminder that everything the Pirates do, they do together.

“We talk about football in life terms,” said Jason Noland, the Pirates’ acting head coach who has them prepped to face MICDS at 1 p.m. Saturday in the Class 4 state quarterfinals. “There’s no better lesson than right there about working through adversity, about knowing that your brother hurts and what can you do for him. That’s just to show love.

“It’s great as a man to see young men do that for one another. At the end of the day, they’re brothers in there and that’s great to see.”

“I can come out here every day and it feels like family,” Greenwell said. “It’s like home. Football takes my mind off a lot of things. I just play for her every game and give it all I have.”

Having his father alongside helps immensely, too.

Ron Greenwell, who served as a varsity assistant coach for several seasons in the mid-2000s under Mark St. Clair, has been an extra set of eyes and ears on the sideline for the varsity coaching staff this season.

“These kids grew up playing for him,” Noland said. “They know and trust his voice. It’s fun to see him as a dad first, coach second. Sometimes, he can get a little fired up, but it’s done out of love for these guys and this team.

“I know it’s great for the whole family for him to be there.”

It’s given both father and son a special connection with special memories.

It eases the grief that lingers.

“It’s still hard for all of us,” Kaiser said. “This wasn’t planned. That’s not how life is supposed to go, but it brings us a lot closer to go through it together.”

And he knows his mother would push them forward with her gentle touch and kind soul.

“A loving mother, that’s her,” Kaiser said. “She was always there for me. She was my biggest supporter. She was there for everything.”

He felt her spirit last Friday night when the Pirates accomplished a major goal of regaining the district championship with a 48-13 victory over Moberly. In the middle of the postgame pandemonium, Kaiser sought out Hannibal athletic director Clint Graham, who had the district title plaque, and charged into the locker room with it so the Pirates could celebrate.

“That’s a huge memory,” Douglas said. “High school football itself is just full of memories. When you go out and have a big win in the district championship, it’s something incredibly special.”

So special, it brought tears to a few eyes.

That’s because those were her sons – all of them.

“In August, when this happened, it was like losing my own my mom in some ways,” Douglas said. “She treated me like one of her own kids. She treated us all that way.