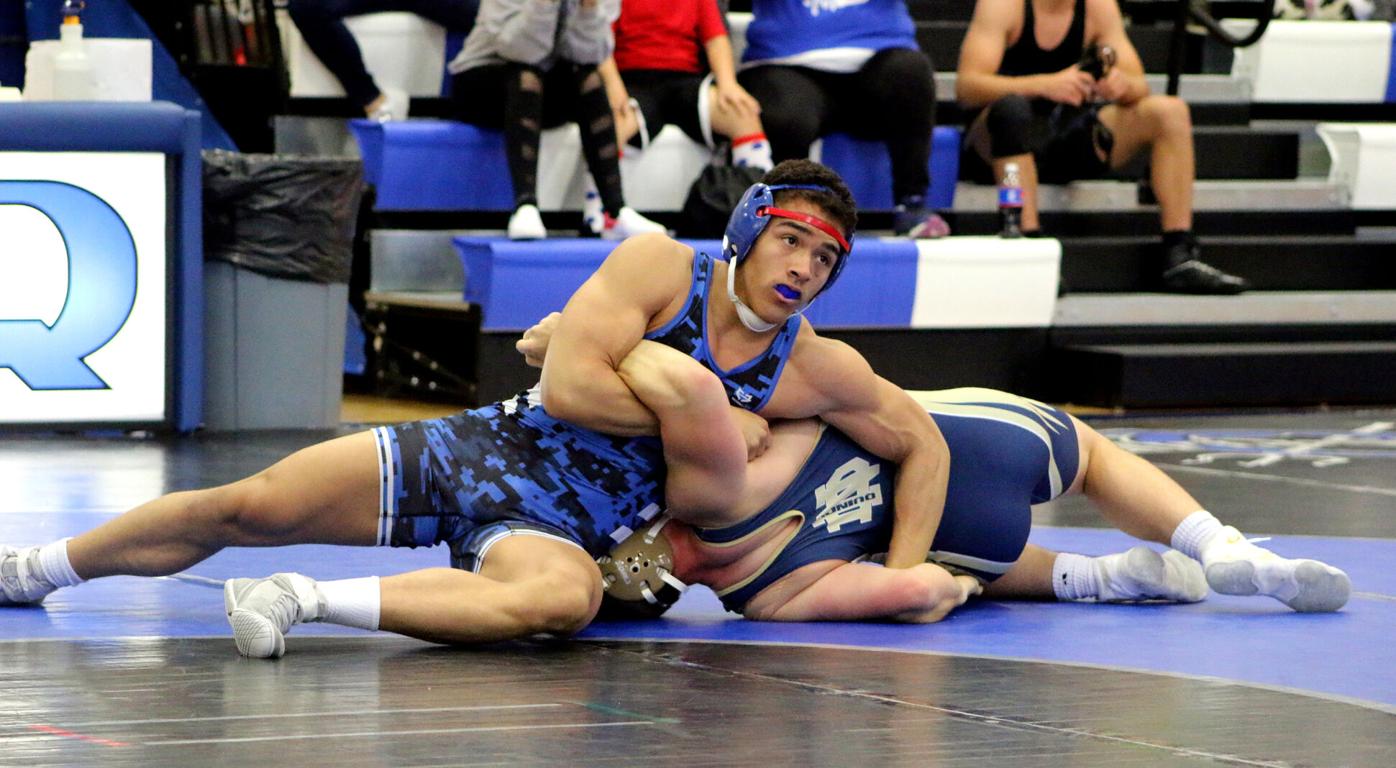 Quincy High School wrestler Kayden Garrett, left, maneuvers to put Quincy Notre Dame’s Noah Clarke on his back during their 160-pound match Saturday at the QHS. Garrett scored a second-period pinfall as the Blue Devils won the dual 58-24. 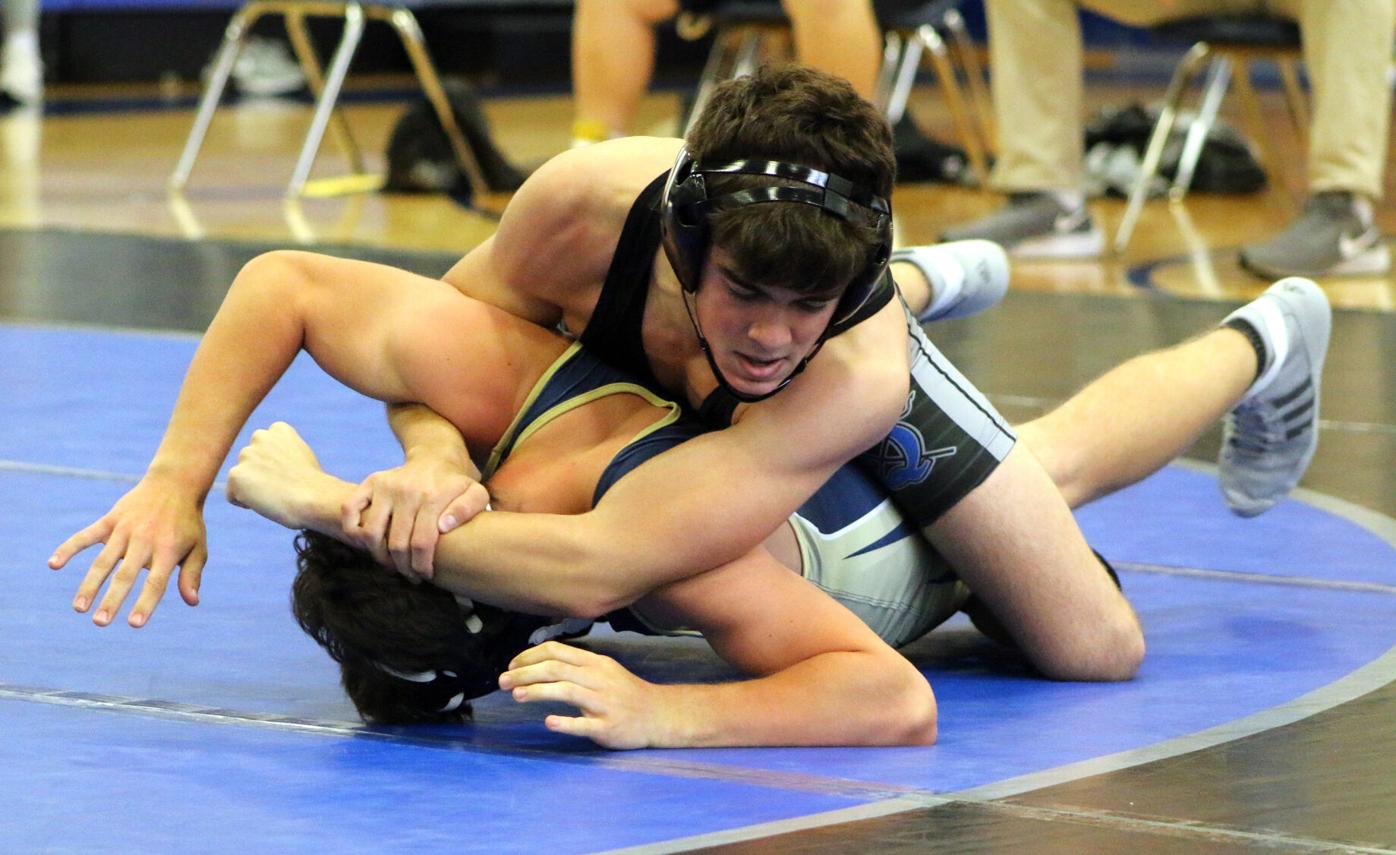 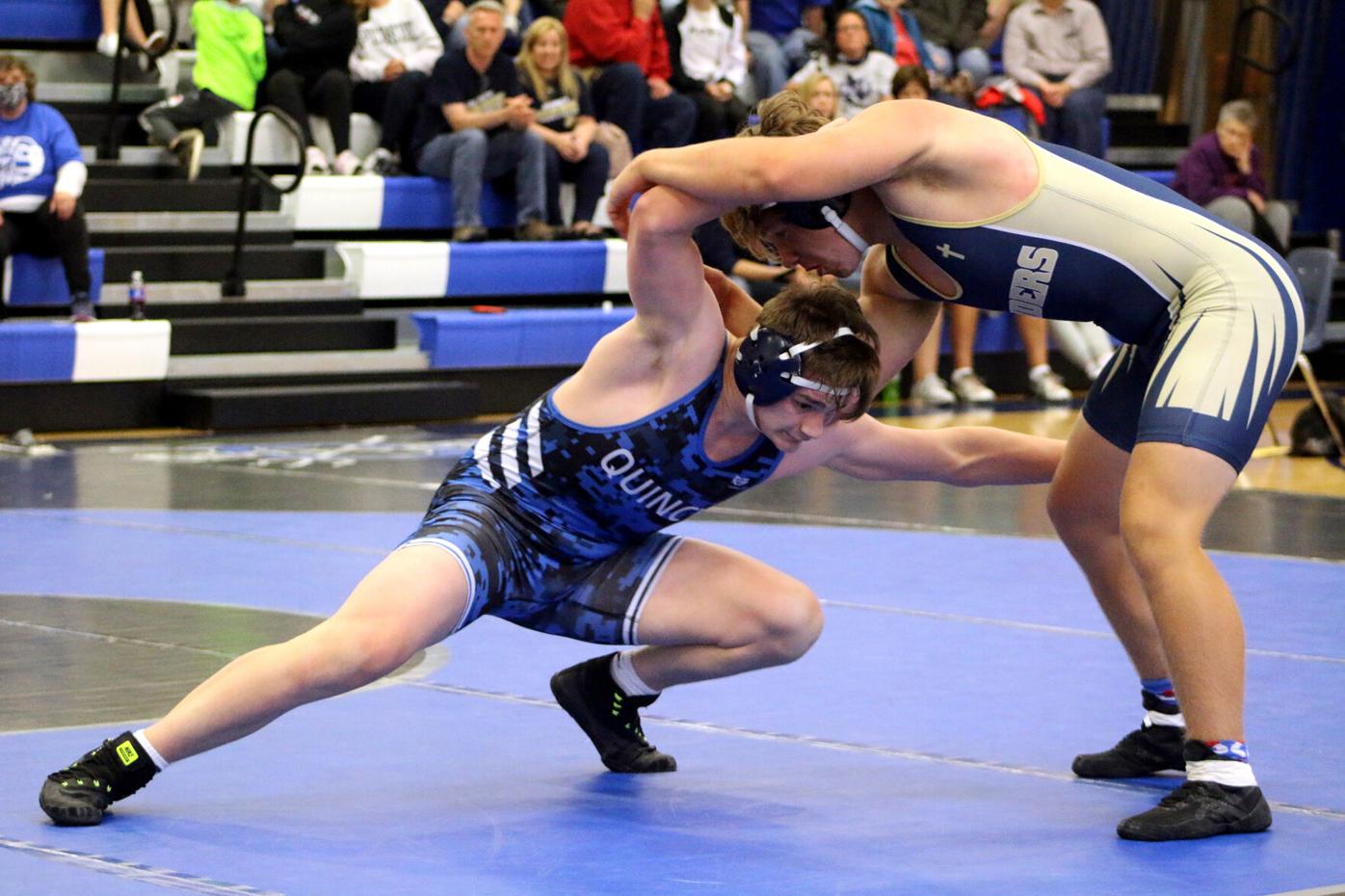 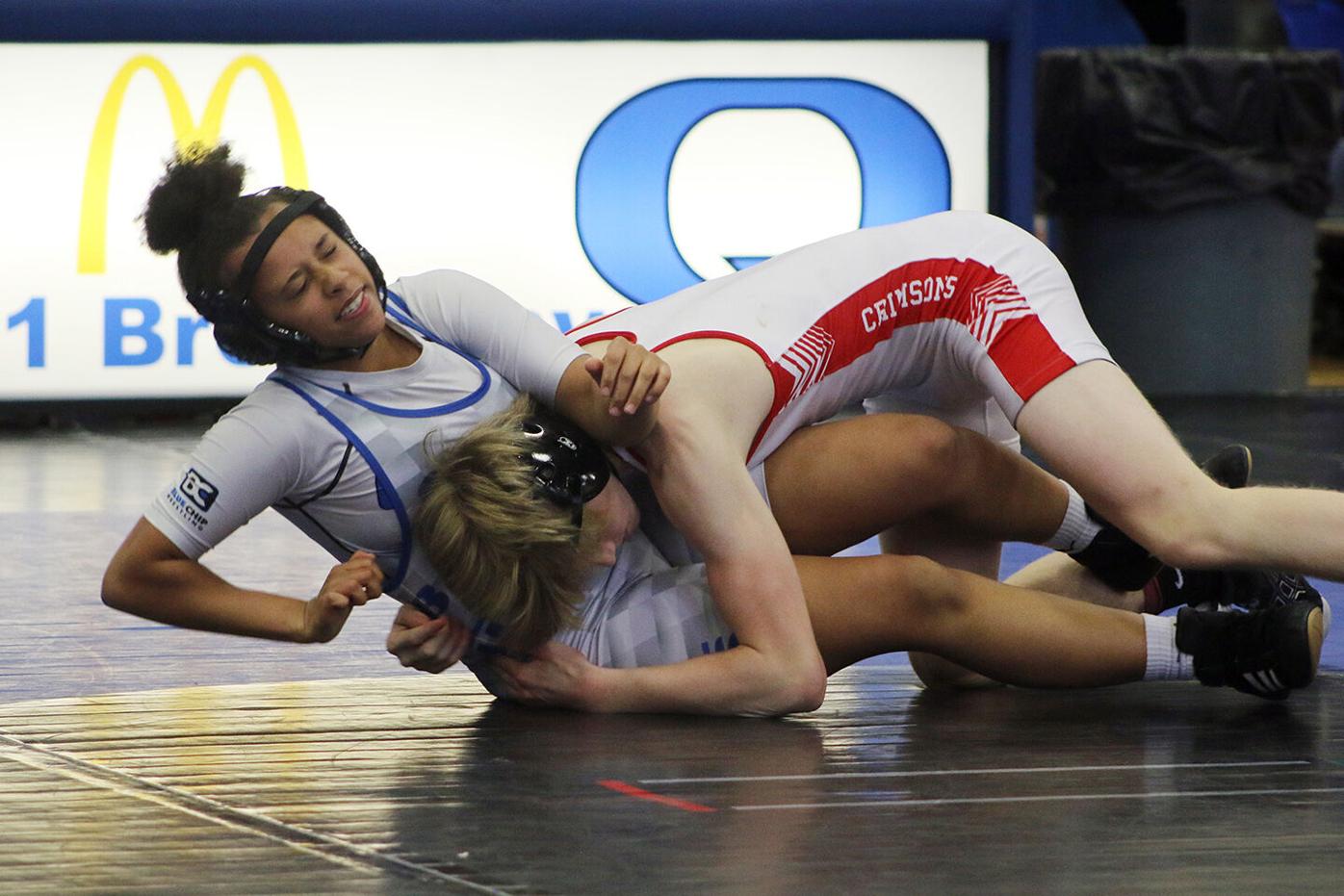 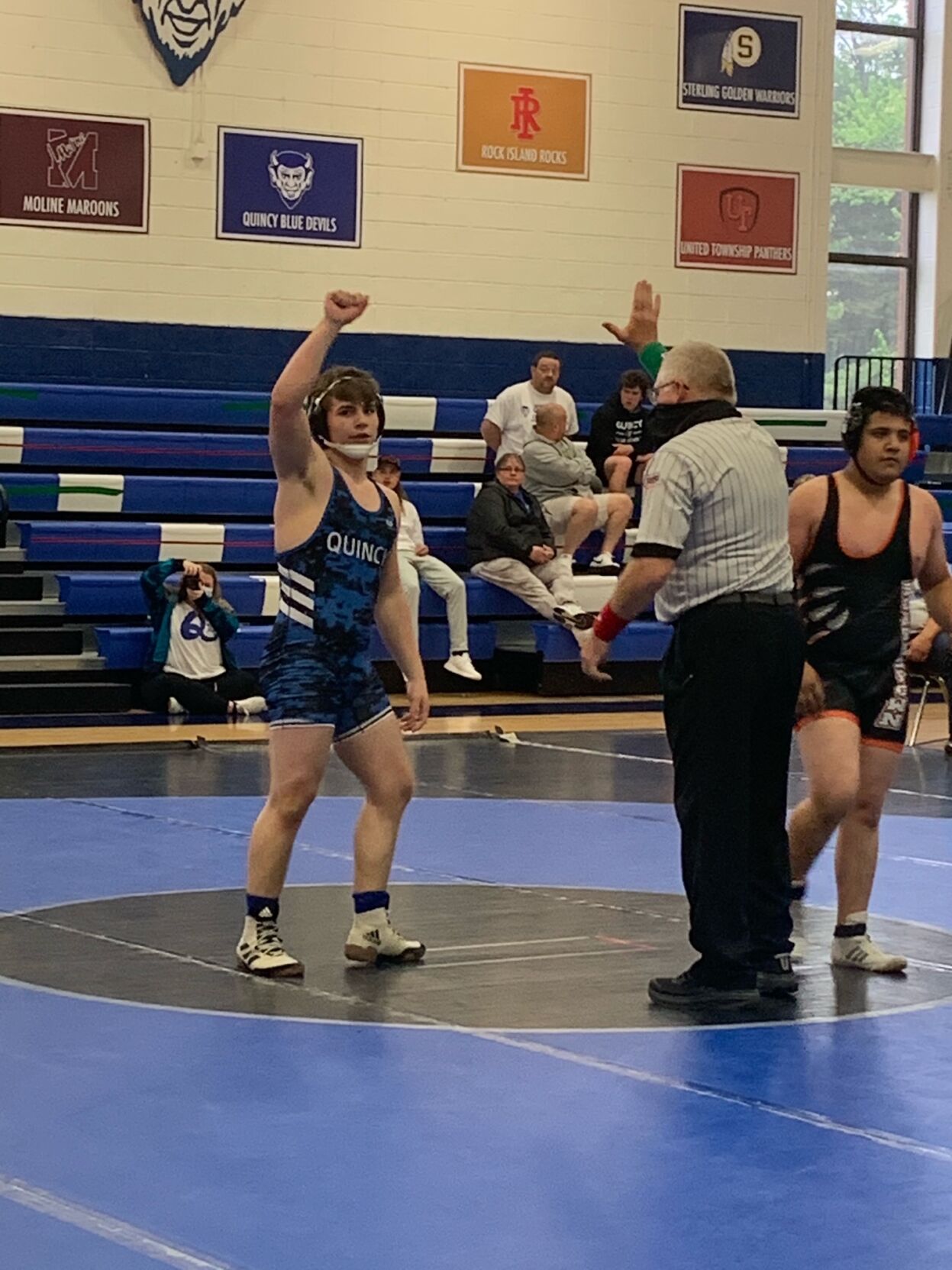 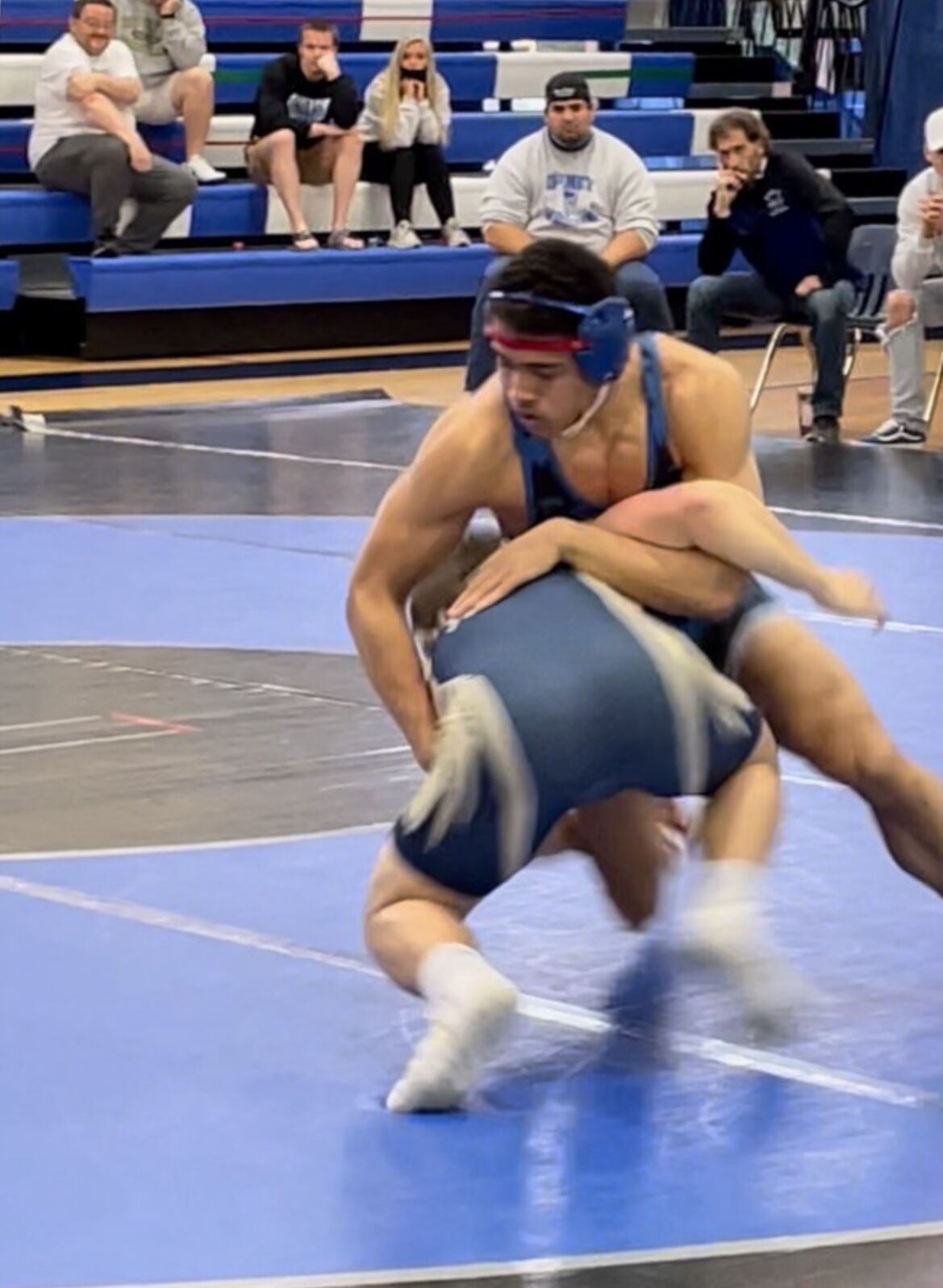 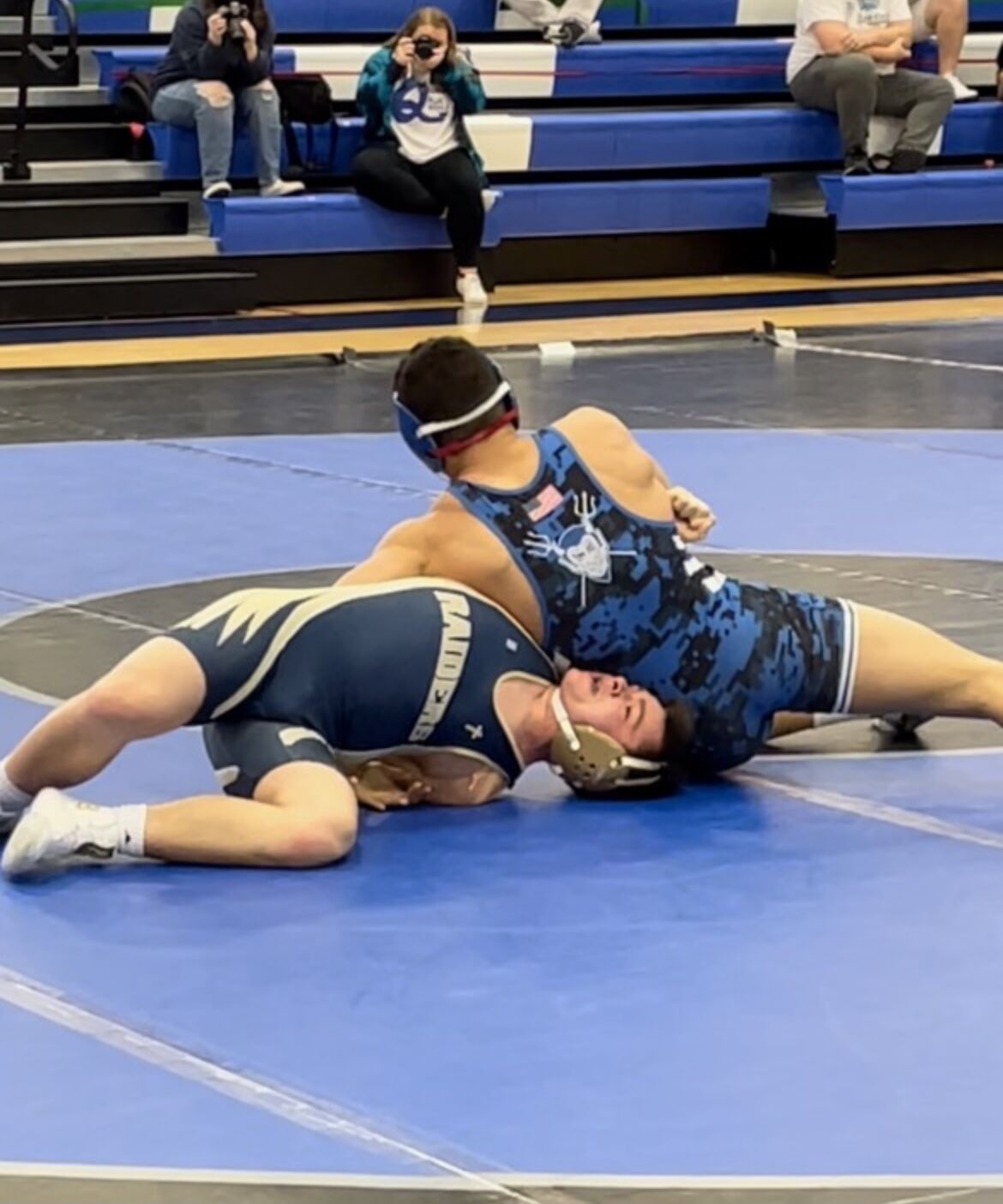 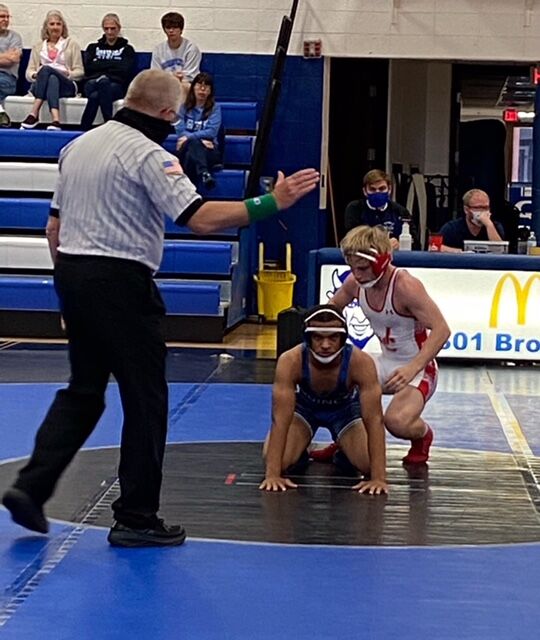 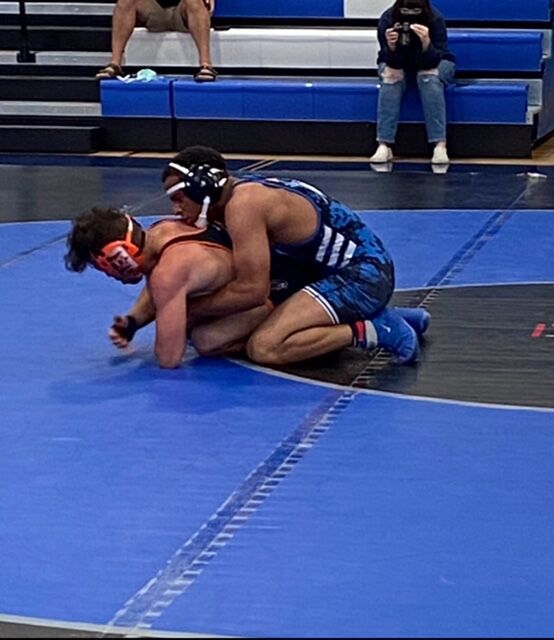 Quincy High School wrestler Kayden Garrett, left, maneuvers to put Quincy Notre Dame’s Noah Clarke on his back during their 160-pound match Saturday at the QHS. Garrett scored a second-period pinfall as the Blue Devils won the dual 58-24.

QUINCY — If there was a silver lining to be found with the coronavirus pandemic pushing the Illinois prep wrestling season deep into the spring, Quincy High School coach Phil Neally thought he’d revealed it.

The Blue Devils were going to grapple outdoors.

Too bad Mother Nature wasn’t in on the plan.

Saturday’s quadrangular featuring QHS, Quincy Notre Dame, Beardstown and Jacksonville was supposed to take place at Flinn Stadium and would have been the first outdoor event in program history. Instead, the steady rain forced a change of venue with everything moving to the QHS gym.

“We still had it and got to wrestle,” QHS senior Thomas Culp said. “That’s what matters.”

“Motivation in the room changed,” said Owen Uppinghouse, the Blue Devils’ 152-pound freshman. “We had a harder practice (Friday). The motivation of each wrestler changes. Every time we come back from a tough loss is just going to make us better by the end of the season.”

Still, it would have been memorable to accomplish that in a unique setting such as Flinn Stadium.

“I’ve wrestled in tournaments before outside on a field, and it’s always a good time,” Culp said. “I just wanted to see it in our own home stadium. It would have been a really, really good experience.”

The uncooperative weather wasn’t a surprise. The forecast all week called for the possibility of rain, which forced the Blue Devils to brace for disappointment.

“The hopes were still high until we got to this morning and it was already raining,” Culp said.

That didn’t alter the focus on success.

“It was a bit a disappointing,” Uppinghouse said. “It wasn’t a huge adjustment. We bend. We don’t break.”

“Everyone looked like they were wrestling for something after Moline showed us what’s up,” said Culp, who won twice by technical fall and beat Beardstown’s Owen O’Hara 8-1. “They came out there really ready to wrestle. The home crowd definitely helped. The mindset bouncing back from Thursday and showing them what we can do was important.”

Even better, the Blue Devils were relentless, especially when trailing.

“I think we pulled stuff together when we were down two points, and we were able to come back and get a couple pins,” Uppinghouse said.

It’s what was expected.

“We were running Friday to cut some weight and you could just tell everyone was there for a reason now,” Culp said. “They understood what’s at stake at this point.”

In the opening dual against QND, it showed. The Blue Devils won seven matches by pinfall, with Eric McClelland recording the quickest pin at 49 seconds in his 138-pound match. Brayden Oenning (145) and Uppinghouse also had first-period pins.

QND’s Curtis Steinkamp scored a pin in 1:40 against QHS’s Bias in their 120-pound match in what turned out to be his only match of the day, while Catherine Steinkamp (113) scored a 5-3 victory against Jacksonville for the Raiders’ only on-mat victory in a 44-15 loss to the Crimsons.

The Raiders beat Beardstown 36-31 with Caleb Hoffman earning a first-round pin at 195 pounds.

“I’m just proud of the effort today,” Neally said. “We had to adjust and we had to change some things up, and the kids handled it. We took a bump in the road on Thursday at Moline, and the kids came back and went out and got after it. The kids responded well.”