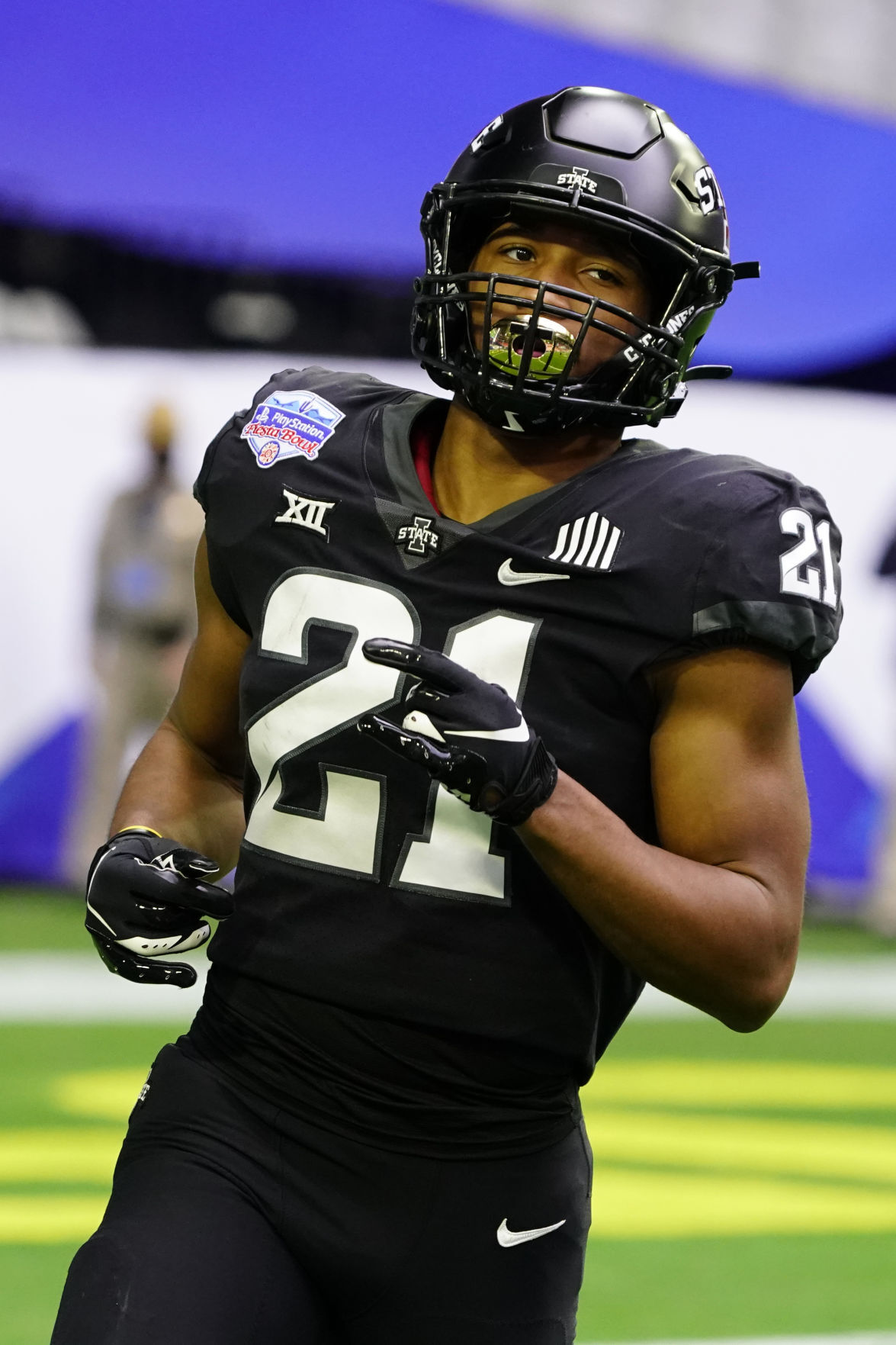 Iowa State running back Jirehl Brock, the former Quincy High School standout, runs during the first half of the Fiesta Bowl against Oregon on Jan. 2 in Glendale, Ariz. 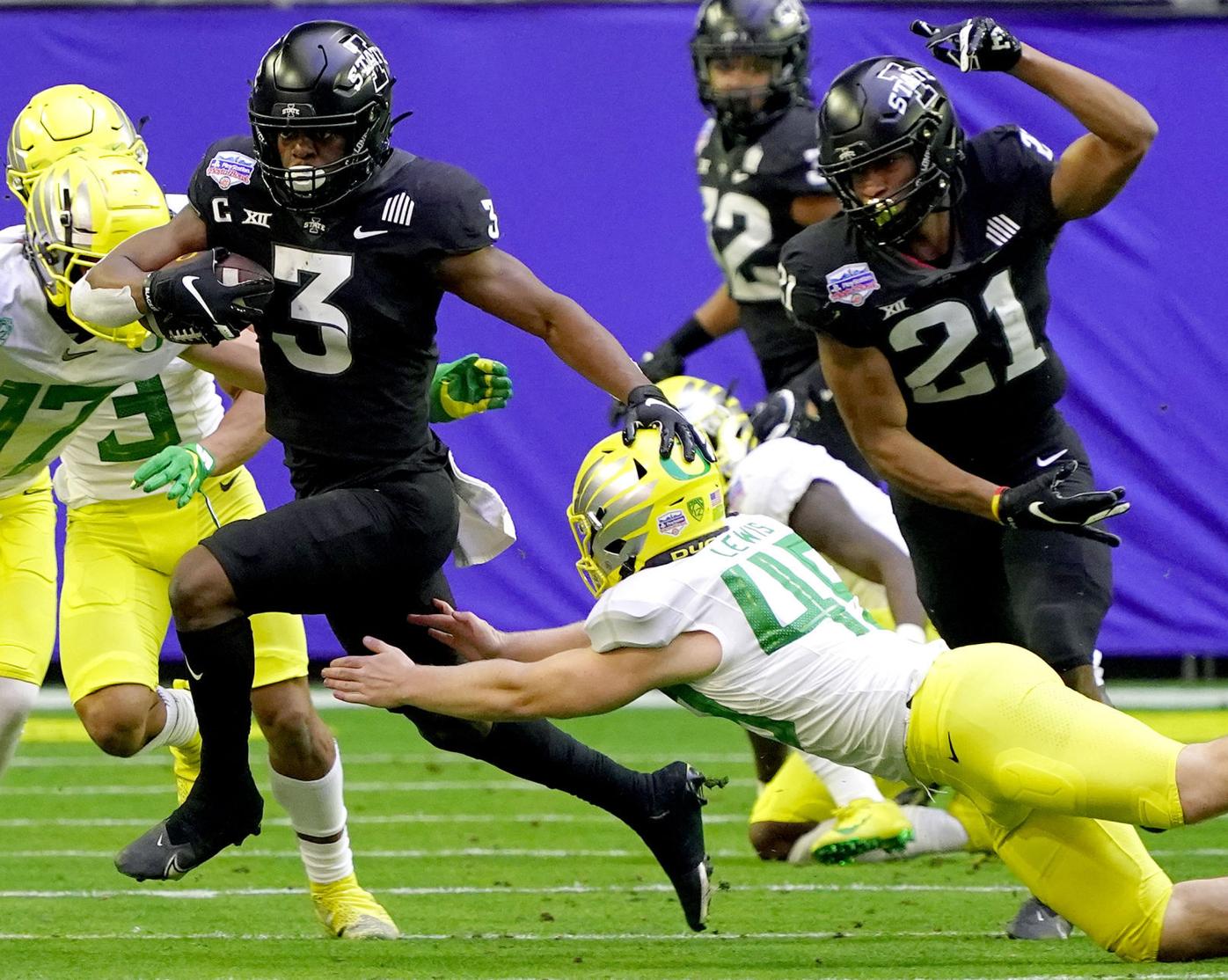 Iowa State running back Kene Nwangwu, left, runs alongside teammate Jirehl Brock, right, as Oregon’s Cooper Shults defends during the first half of the Fiesta Bowl on Jan. 2 in Glendale, Ariz.

Iowa State running back Jirehl Brock, the former Quincy High School standout, runs during the first half of the Fiesta Bowl against Oregon on Jan. 2 in Glendale, Ariz.

Iowa State running back Kene Nwangwu, left, runs alongside teammate Jirehl Brock, right, as Oregon’s Cooper Shults defends during the first half of the Fiesta Bowl on Jan. 2 in Glendale, Ariz.

Nothing ventured, nothing gained.

The origins of the saying date back to Chaucer’s writings more than 600 years ago, but the premise remains valid today. Invest in yourself, your abilities and those around you, and anything becomes possible.

Had he not listened to his coaches, had he not invested his spirit and soul into becoming a better practice player, had he not embraced the need for consistency, the former Quincy High School all-state running back would not have found himself on the field at crucial moments of the Fiesta Bowl.

Trusted as a third-down back and on the kick return team, Brock helped the Iowa State football team reach a New Year’s Six Bowl game for the first time and cap the best season in program history with a 34-17 victory over Oregon in the Fiesta Bowl, played in Glendale, Ariz.

The celebration that followed inside State Farm Stadium matched the moment.

“Probably more fun than it looked,” said Brock, who was allowed to go on the postgame dais and get his picture taken holding the trophy.

That’s because this was a celebration for all, not for one.

“Being on the field with the team, especially those seniors, was amazing,” Brock said. “They came to school when we were 3-9 and we go 9-3. It’s a total turnaround. (Iowa State coach Matt) Campbell sparked that fire and got it done.”

That fire burns strong, even during a down time.

Brock and the Cyclones have been given a few weeks to decompress before returning to Ames, Iowa, for the second semester. It’s the opportunity to visit other college friends and spend quality time at home, a place he wasn’t afforded to visit much during the coronavirus pandemic.

“Just to take a step back from everything we went through this season and prepare for another season,” Brock said, “that’s the nice part of this.”

At the same time, being prepared for next season and the opportunities ahead is never far from his mind.

“There’s no for sure,” Brock said. “Anything can happen. I have to go out there every day and play like I want to play on game day and make Coach play me. I have to earn their trust by doing everything right when I can. In the classroom matters, too. He’s going to play the people he trusts, and if I’m doing well in the classroom and on the field, I’ll have that opportunity.”

That was the biggest epiphany this season brought.

As a true freshman at Iowa State in 2019, Brock played in the maximum allowable games without burning a redshirt, picking up 48 yards on nine carries in four appearances. It was enough of a sampling to create anticipation he and Breece Hall, the Cyclones’ Heisman Trophy finalist, could be a solid 1-2 punch in the backfield.

By fall, when the Big 12 Conference cleared the way to play, Brock found himself quarantined because of COVID-19. He missed the entire preseason camp and didn’t see the field in any capacity on gameday until October 3 against Oklahoma.

“When I came back, I wasn’t doing well,” Brock said. “I wasn’t being myself. I wasn’t being the player the coaches thought I could be, and they told me that.”

Campbell’s mantra of “make me play you” was ringing true.

“(Running backs coach Mike McCall) told me I needed to be more consistent in practice,” Brock said. “I took that and ran with it, trying to be the same person every day in practice.”

Three games after getting on the field, he found himself there in more critical situations, including as the Cyclones’ primary running back on third-and-long situations. He started playing on the kick return team and ended up appearing in 10 games and finishing the season with 13 carries for 46 yards and four receptions for 32 yards.

“It was just showing up to practice with a mindset of going to work and learning and being the same person every day,” Brock said. “You have to grow. It’s OK to make a mistake, but don’t make the same amount twice type of mentality you have to have.”

Keep that in mind and the playing time will come.

So all Brock worries about is being the best version of himself.

That’s how he helps the Cyclones make next season even more memorable.

“People would ask me why I chose Iowa state because they really weren’t doing so well and I’d tell them, ‘I can see where they’re going. It’s not about where they are now, but the potential they have for where they want to go,’” Brock said. “I trust Coach Campbell and everything he preached on and I still do to this day. I wouldn’t change my mind if I had to go back.”