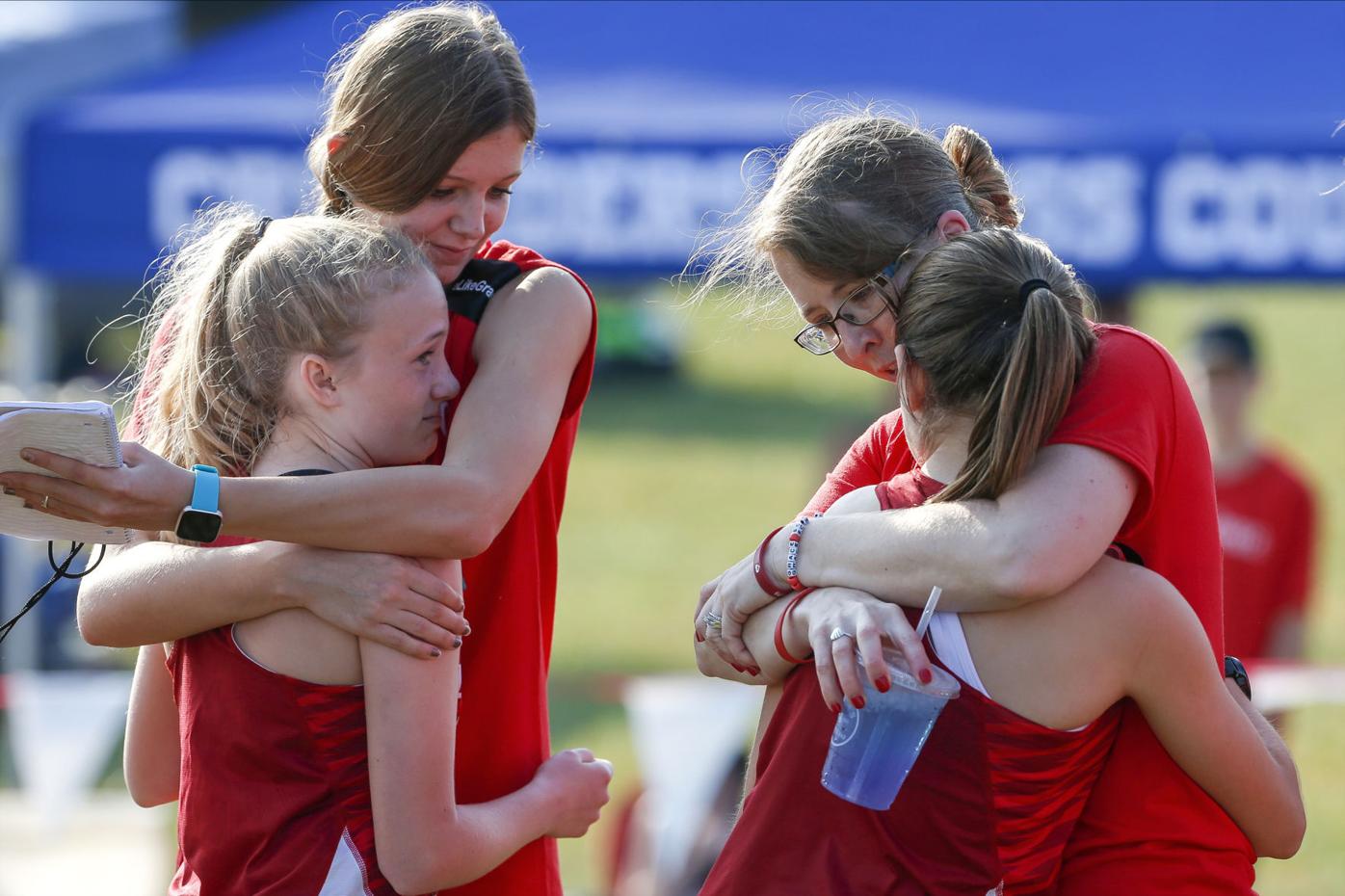 Liberty’s Arianna Neisen hugs Holly Schell, mother of Grace Schell, prior to the Liberty Invitational cross country meet where a moment of silence and prayer were done before the girls race in honor of Grace Schell on Saturday. Schell died last Sunday in an all-terrain vehicle crash. 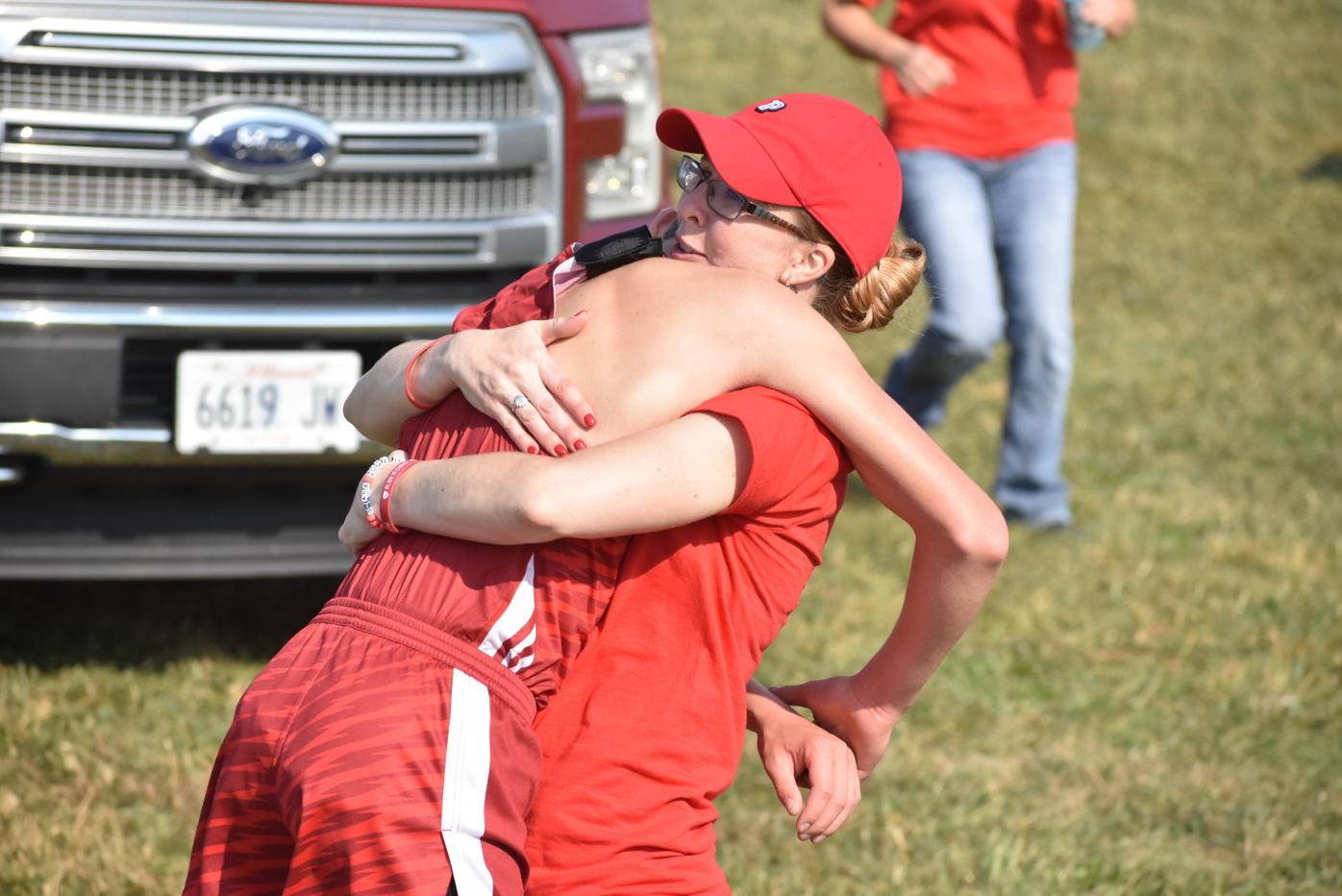 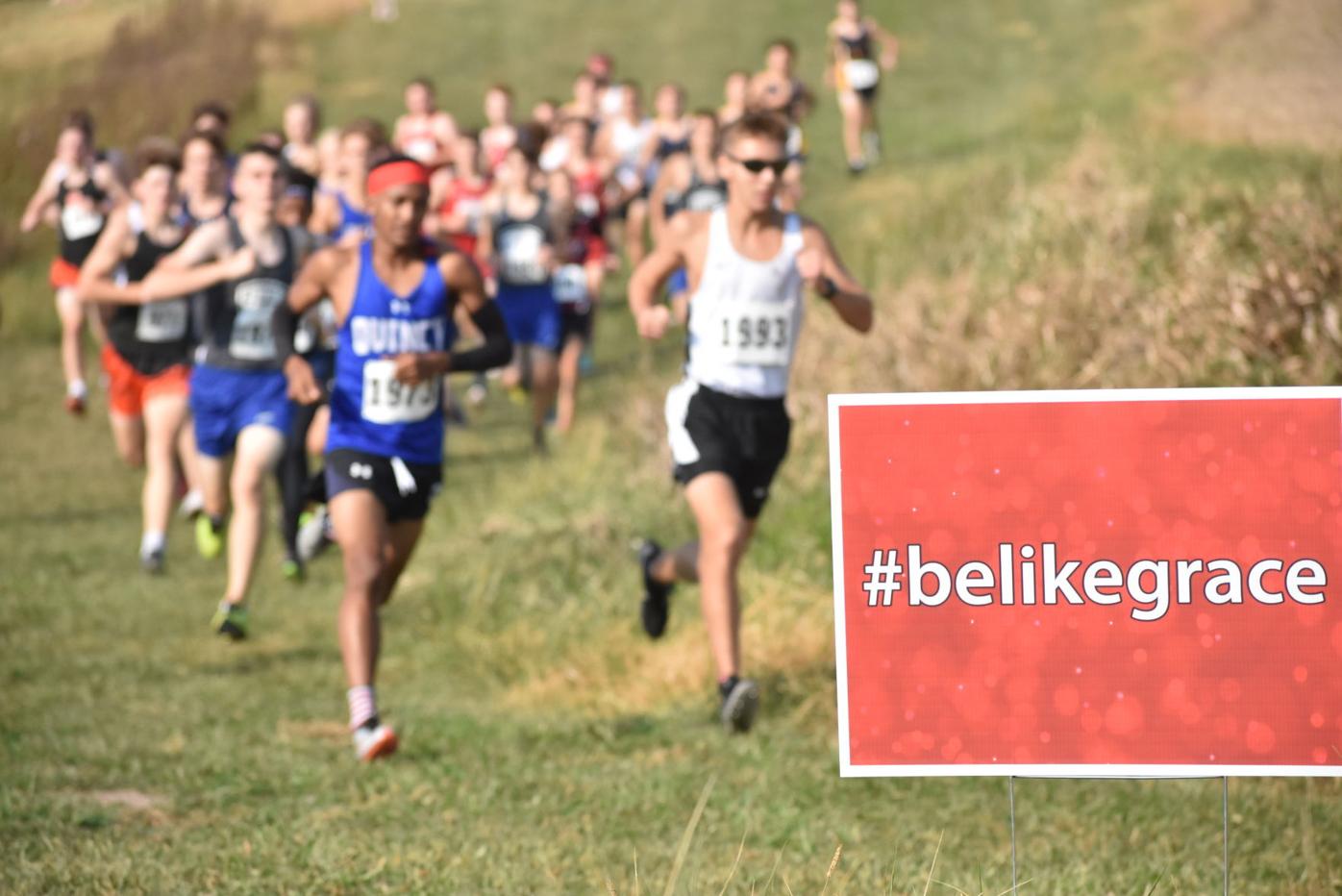 The varsity boys racers run by a #belikegrace sign during the Liberty Cross Country Invitational at Uhling Farms on Saturday in Liberty, Ill.

Liberty’s Arianna Neisen hugs Holly Schell, mother of Grace Schell, prior to the Liberty Invitational cross country meet where a moment of silence and prayer were done before the girls race in honor of Grace Schell on Saturday. Schell died last Sunday in an all-terrain vehicle crash.

The varsity boys racers run by a #belikegrace sign during the Liberty Cross Country Invitational at Uhling Farms on Saturday in Liberty, Ill.

Holly Schell patiently waited by the finish line at Uhling Farms on Saturday, watching as runners crossed the finish line during the girls race in the Liberty Cross Country Invitational.

Typically Holly would be looking for her daughter, Grace, to cross and start encouraging her teammates, both those who finished before and after her.

Grace Schell died in an ATV crash last weekend, sending shockwaves through the Liberty community and the local cross country scene. So Saturday, instead of waiting for her daughter to cross the finish line, Holly was there to embrace every Eagle as they finished, collapsing from their emotional exhaustion into her arms.

“I chose to do that, although it was difficult because Grace wasn’t going to come across that finish line,” Holly said. “I chose to do that because that is what she would have done. She was the girls’ biggest cheerleader. They always called her the team mom because she always made sure that everybody had water. Is everyone drinking today? Do you have your warm-up suits? That’s who Grace was.

“I know that’s who she needed me to be today. I am honored that the girls embraced me, and I am honored by the amazing things the team has done. I am so incredibly proud of our girls and our boys. They ran a race today and Grace was cheering for them the minute they crossed the finish line. I just got to be a part of it.”

The embrace she gave each Liberty runner did worlds of good for both parties.

“I think that was her way of showing the kids that she loves them, but at the same time it was therapeutic for her as well,” Liberty cross country coach Jared Schmidt said.

Multiple teams were represented at Uhling Farms on Saturday, but before the race the competitors mostly donned red shirts with the message “#BeLikeGrace” in support of the Eagles.

That support, and the messages from teams and community members from around the area, have been more comfort than people realize.

“Grace’s story is touching so many lives and brining people back to their humanity,” Holly said. “(Grace’s father Dustin Schell) and I have heard amazing stories that people are sharing with us. I really do believe that we can be just like Grace. She’s our warrior now and as a mother, and I know Dustin as a father, we are so proud of our daughter.”

In the time since the accident, the Eagles and the Schell family have received messages of love and support both from long-time friends and people who have never set foot in Liberty, Ill.

“The fact that we are getting well-wishes and prayers and thoughts from Texas and other states around the country, that is just amazing,” Liberty athletic director Adam Lee said. “That’s the impact that Grace had not just on us but everyone around us.”

Lee contemplated canceling Saturday’s race, along with Liberty’s involvement in the West Central Conference championship earlier this week, but ultimately he left that decision to the team.

The Schells were grateful for that decision.

“I am proud of the Liberty team today running and showing their love for Grace because I know it was difficult for them to go out and do that,” Holly said. “Grace had a saying in her journal, and it said, ‘I didn’t feel like running today, and that’s why I did it.’ I think that’s just true in everything that we do in life.”

It was difficult for the Eagles. There was a somber mood present throughout the event and as the Liberty runners approached the finish line their pain and grief was written across their face.

After the race it was a struggle for those closest to Grace to regain their composure, but ultimately Schmidt thinks it’s healthy for his team to feel how it does.

“We needed to start the process of really grieving and getting through this, and I think today was the first step in that for sure,” Schmidt said.

As parents, the Schells never truly knew how her daughter interacted with people when they weren’t around. Little did they know, her positivity never left.

“She didn’t check that at the door,” Dustin said. “She took that to school, she took it to wherever she was working or volunteering because she never switched it off. I’ve heard a lot of comments from my wife and other people and I’ve heard so many cool stories of Grace having impacts on people’s lives that were positive.”

Whether it was a quick hello or a hug in the hallway, Grace wasn’t one to let someone go ungreeted.

That kind of a positive influence is something the Liberty community wants everyone to strive for.

Grace’s message has spread far and wide. High school and college cross country teams from as far as Texas and Maryland have reached out to show their support, and teams across Illinois and Missouri have donned red gear and adopted the hashtag #BeLikeGrace.

“I think when tragedies like this hit, they are devastating but also they bring communities together that wouldn’t have otherwise interacted together,” Quincy High School junior Anna Schuering said. “I think other teams were able to step up and show their love and support for Liberty as they are going through this unimaginable tragedy. Being able to think outside of ourselves and pray for someone else and pray for this community as they are going through this great suffering and pray that we can see something beautiful come out of it. We know that God can do that, and we are patiently waiting so see that.”

The wait for a positive side of this tragedy didn’t take long, but that’s because of who Grace was.

“Grace was love. That’s who she was, and now she’s spreading that throughout the country,” Holly said. “It is a great day to be like Grace. It really is a great day.”

As for how to truly “Be like Grace,” the process is simple.

“Be your best. Go through life with a smile,” Lee said. “Give it everything you’ve got every single time and just be a good person. Make sure you say hi to somebody, make sure you tell them you love them and give them a hug. She was an inspiration not only in how she did things but everything she did in life.”

“There might be somebody out there that has heard of Grace’s story or has seen a post of someone and maybe they didn’t feel like getting out of bed that morning, but they did it because she touched them in some way,” Holly said. “This is just the beginning for Grace. A lot of people keep saying how tragic it was, and it was a tragic accident. But Grace’s story was written this way because it needed to be for all of these hundreds and hundreds of kids and people across the nation to be brought together during this very tumultuous time in our world.