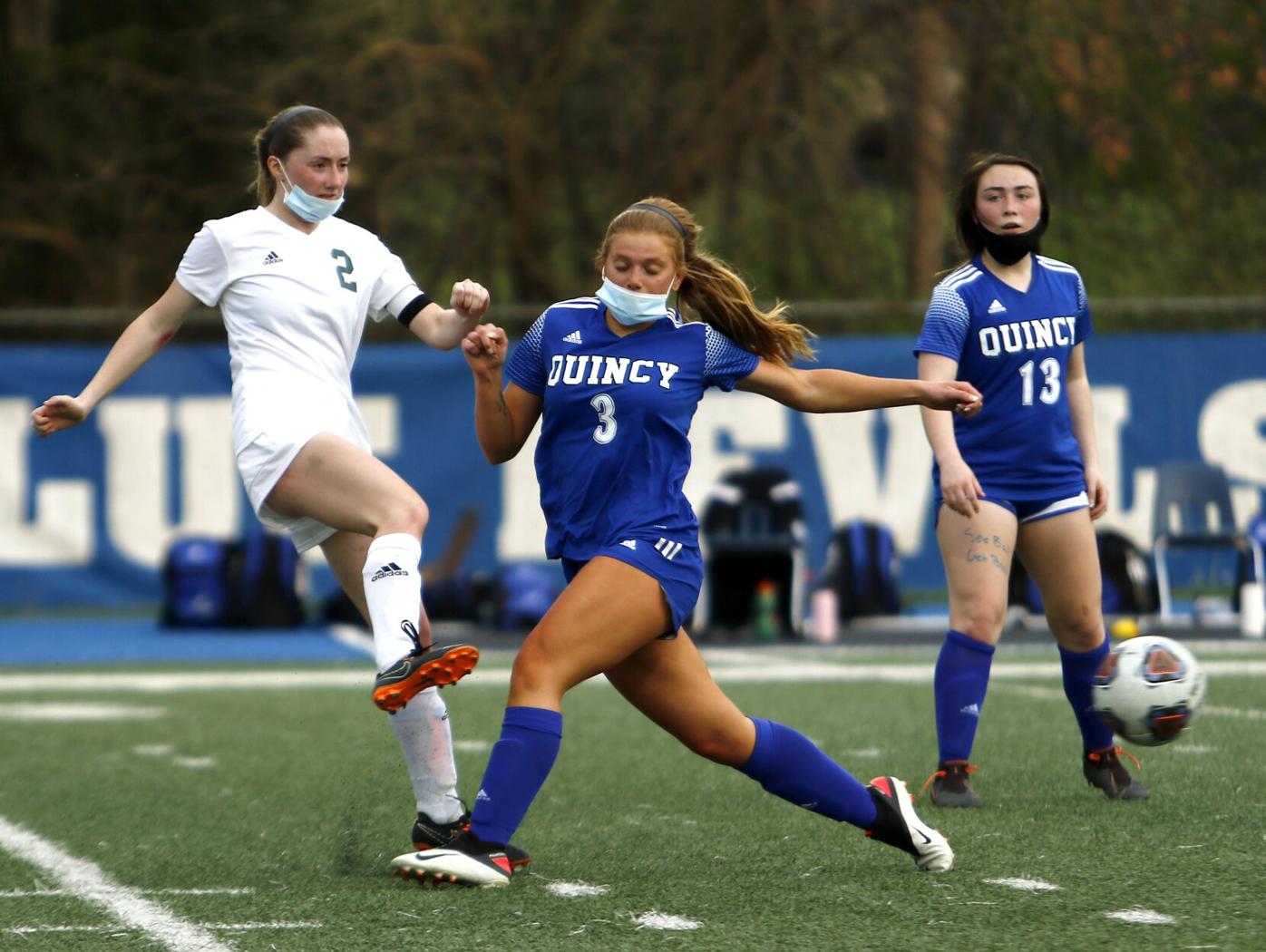 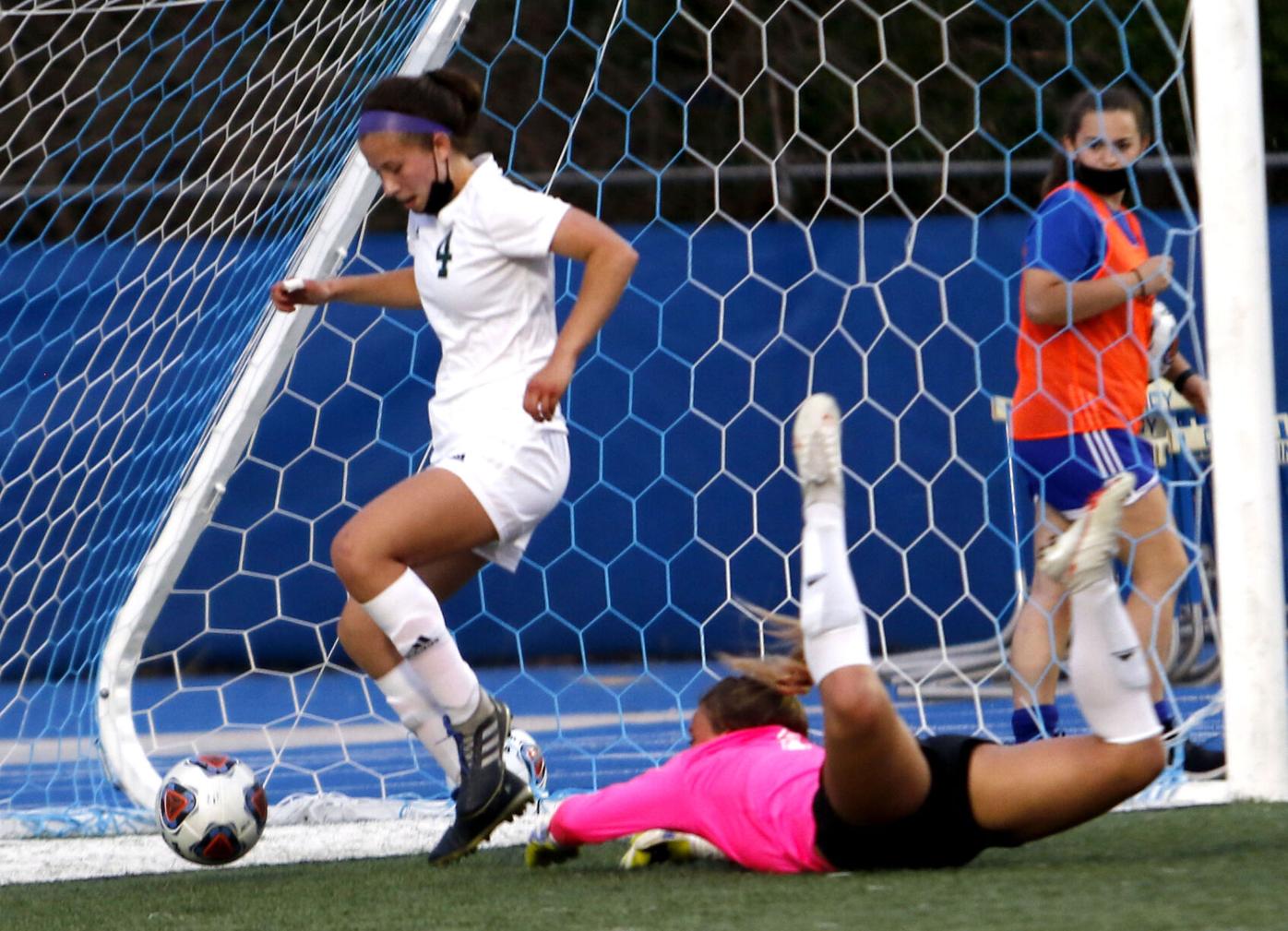 Geneseo’s Bailey Huizenga touches the ball into the net after sidestepping Quincy High School goalkeeper Maddie Hill to score off a rebound for the first goal in the Maple Leafs’ 2-0 victory Tuesday night at Flinn Stadium.

Geneseo’s Bailey Huizenga touches the ball into the net after sidestepping Quincy High School goalkeeper Maddie Hill to score off a rebound for the first goal in the Maple Leafs’ 2-0 victory Tuesday night at Flinn Stadium.

QUINCY — Consider it an unfortunate draw.

Or maybe the best lesson there is.

That all depends on your perspective.

Tasked with opening the Western Big Six Conference season against senior-laden Geneseo on Tuesday night at Flinn Stadium, the youthful Quincy High School girls soccer team suffered a 2-0 loss in which critical mistakes allowed both goals to be scored in about a three-minute span.

Another way of looking at it is the Maple Leafs capitalized on opportunities the way a veteran squad should.

Again, it’s all about perspective.

“I told the girls from the beginning I really like our team and I still really do,” QHS coach Travis Dinkheller said. “But there’s going to be bumps in the road. … Experience and being in a tight game are things we don’t have right now, but they are things we are going to learn and get better at.”

The rarity of a conference loss — Quincy has won eight WB6 championships in Dinkheller’s previous 11 seasons at the helm — made the second-half effort tougher to take.

Such a quick turn of the tide made on the field or on the QHS sideline emotional.

“I had to take a step back and calm myself so I could be a composed person for them,” Dinkheller said. “You probably heard me say, ‘It’s OK. There’s plenty of time.’ Honestly, that’s something in my fiery days I wouldn’t have been able to do.

“I knew the girls wanted it. Their energy and effort was great, but we needed to direct it in the right way. After the second goal, we had to rein it all in and stay composed.”

The ability to do that comes with age and experience.

As does the ability to see the field, something that played against the Blue Devils (1-2, 0-1 WB6) in the second half.

“We talked about trusting each other to space,” Dinkheller said. “It was one too many touches too many times. If you see what I call a second-level pass where you penetrate with your passing, if we start seeing those, oh, my gosh, we’re going to be unbelievable.”

It’s all about seeing the field, not just the play in front of you.

“We looked straight forward instead of looking to the wings,” Dinkheller said. “We’ll continue to preach trust the ball to space.”

Roughly seven minutes into the second half, off a restart from the right wing, Maple Leafs junior Bailey Huizenga drifted away from her mark and into the goal mouth, where she jumped on the rebound of Blue Devils goalkeeper Maddie Hill’s initial save and punched it in for a 1-0 lead.

About three minutes later, the Blue Devils gained possession after a Maple Leafs corner kick, but a pass to the wing was intercepted. Geneseo senior midfielder Taylor DeSplinter touched the ball wide to give herself some space and blasted a shot into the far side of the net for the two-goal edge.

That was enough for a defense that didn’t buckle.

“We had a three-minute lapse,” Dinkheller said. “We have to learn we have to make adjustments on the field. Those are things we will continue to work on.

“The ideas were there. The execution was not. We will learn from that and get better.”