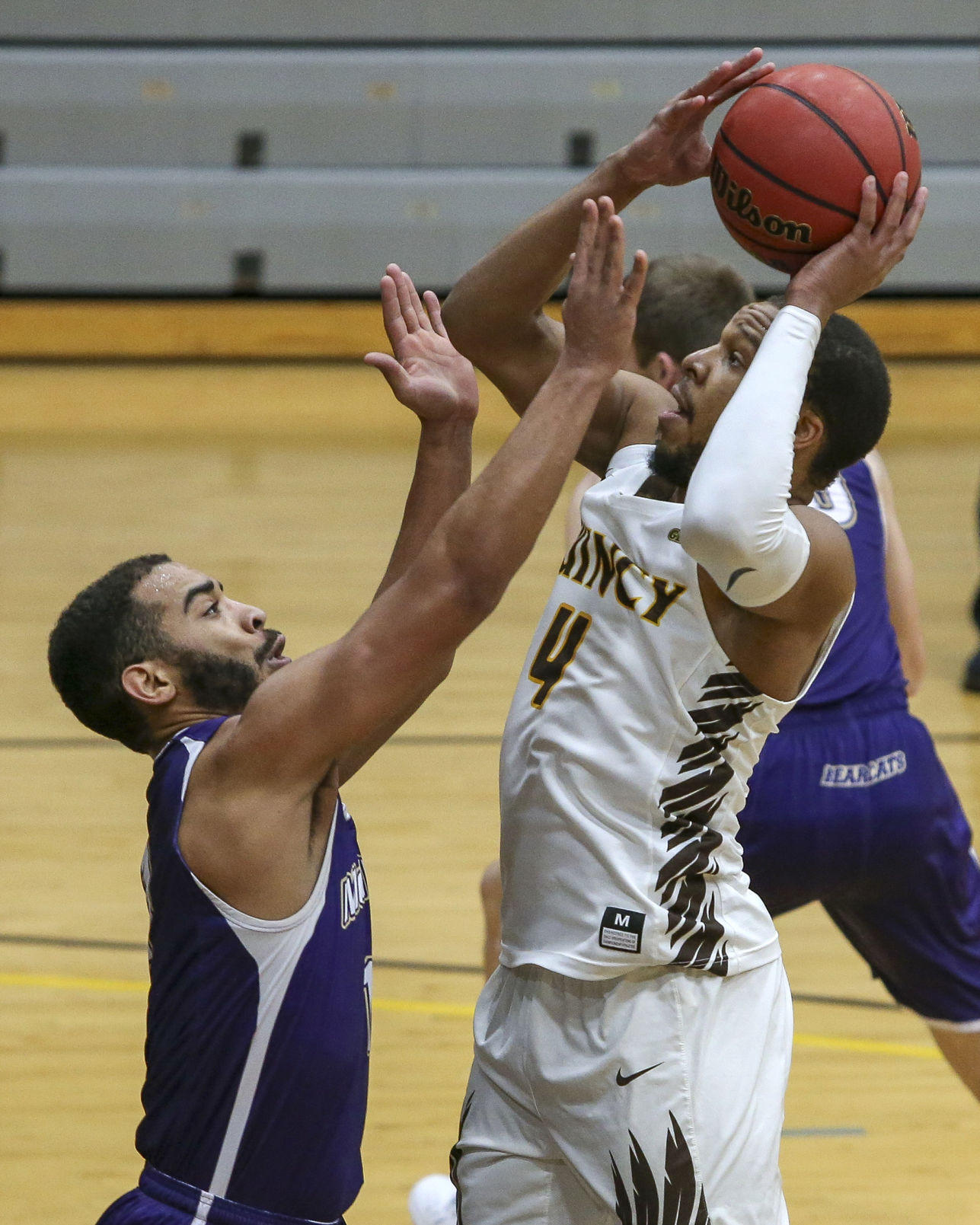 McKendree’s Aidan Scott, left, attempts to block a shot from Quincy University junior guard Jamaurie Coakley in the paint during the Hawks’ victory over the Bearcats on Saturday at Pepsi Arena. 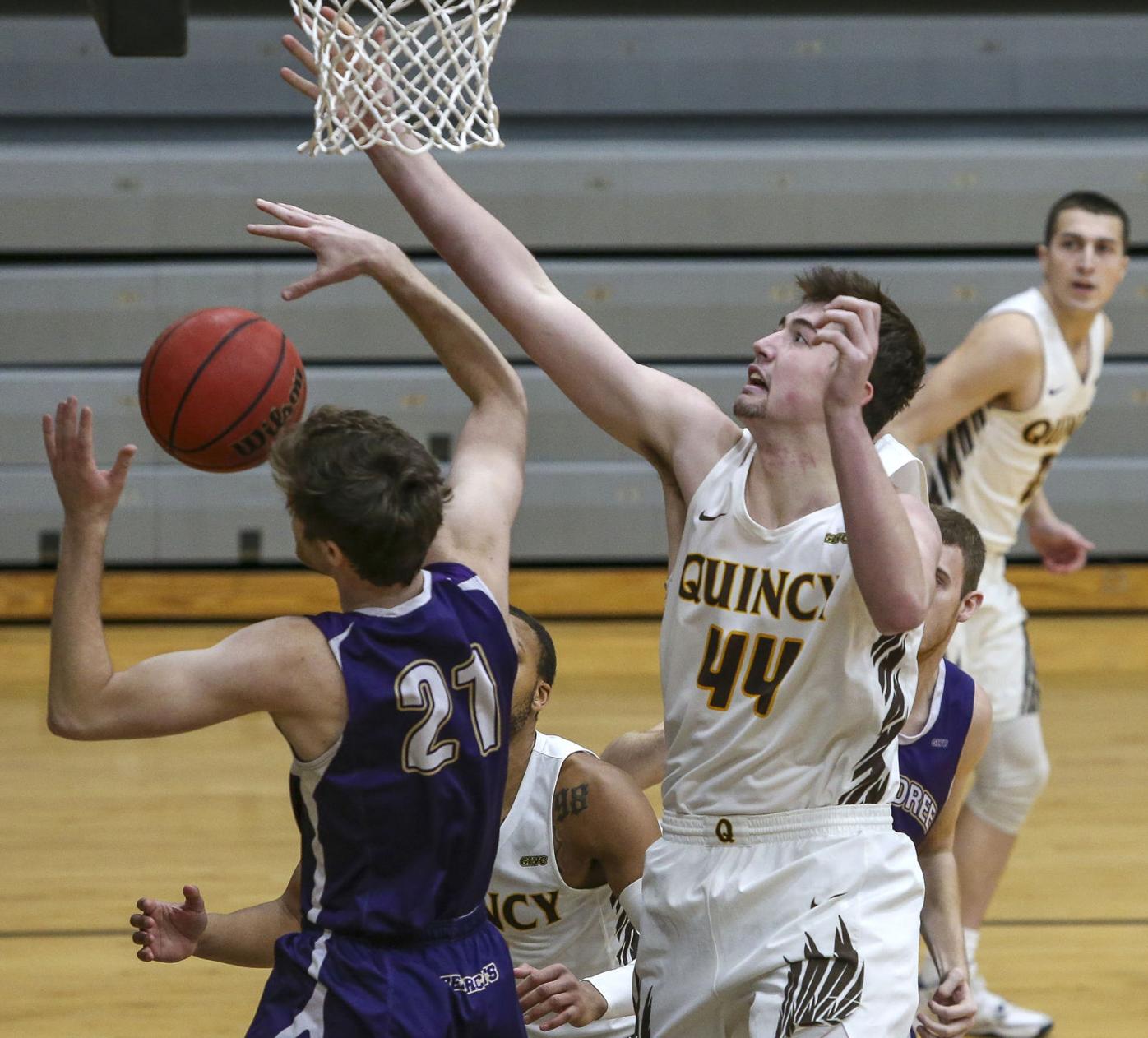 McKendree’s Aidan Scott, left, attempts to block a shot from Quincy University junior guard Jamaurie Coakley in the paint during the Hawks’ victory over the Bearcats on Saturday at Pepsi Arena.

“I just know that kid and there are times he has that look in his eye and you know it’s going to be all right,” Hellenthal said. “That told me today was going to be one of those days.”

The Hawks went into Saturday’s Great Lakes Valley Conference matchup against McKendree without leading scorer Tanner Stuckman, who tweaked a sprained ankle during a 29-point performance Thursday night and wasn’t cleared to play. It forced someone other than Stuckman, QU’s top scorer in seven of the first 12 games, to spearhead the offense.

“I wanted him to know I was up for the challenge,” Callier said.

It became abundantly clear everyone else was up to the challenge as well.

Callier opened the game with 3-pointers on two of the Hawks’ first three possessions, made five consecutive 3-pointers overall and orchestrated a 23-point effort that propelled Quincy to a 75-69 victory at Pepsi Arena and ended a three-game losing skid.

“It’s really satisfying because we know what type of team we are and what we’re capable of,” Callier said. “To see us execute and guard and play defense and do the little things, it feels good because we prepared for it. Everyone had a hand in it, too.”

Junior guard Silas Crisler recorded his first double-double of the season with 10 points and 11 rebounds. Junior guard Jamaurie Coakley had five assists, five rebounds and 13 points. Sophomore forward Adam Moore was stout in the post with six rebounds and three blocks to go along with four assists. Freshman guard Jaylen Boyd went 4 of 6 from the line and was tenacious defensively off the bench.

And freshman forward Solomon Gustafason, stepping into the starting lineup in place of Stuckman, scored four points in 12 productive minutes.

“He got guys open with his screens and he made a couple buckets,” Callier said. “He was aggressive and did a great job.”

It was that way up and down the lineup.

The Hawks (4-9) ran out to a 24-12 lead with nine minutes remaining in the first half, only to see the Bearcats chisel away at the deficit. A 10-0 run over a three-minute span turned it into a one-possession game, but Callier quelled the uprising with a 3-pointer and Quincy never lost the lead, going up 37-32 at halftime.

“We were talking in the huddle and we were like, ‘All right, guys, they’ve made their run. Let’s adjust,’” Crisler said. “We were saying we’re going to weather the storm, we’re going to make a run and we’re going to be fine. It was a really big moment for us. Instead of being in panic-mode, we were really calm and relaxed.”

The Hawks shot 45.6 percent from the field and 42.9 percent from 3-point range, but the most telling stat was the assist-to-turnover ratio. They had 13 assists against just 13 turnovers, committing only five turnovers in the second half.

More importantly, the Hawks quieted one of the GLVC’s top-shooting teams. The Bearcats shot just 29.6 percent from 3-point range and were held 10 points below their season scoring average.

“I told the guys after the game I’ve coached a lot of good players and a lot of good teams over 21 years in this business, and tonight I was as proud as I’ve ever been of team as far as bouncing back from adversity,” Hellenthal said. “They just found a little something extra. It was really a good moment for our team and our program.”