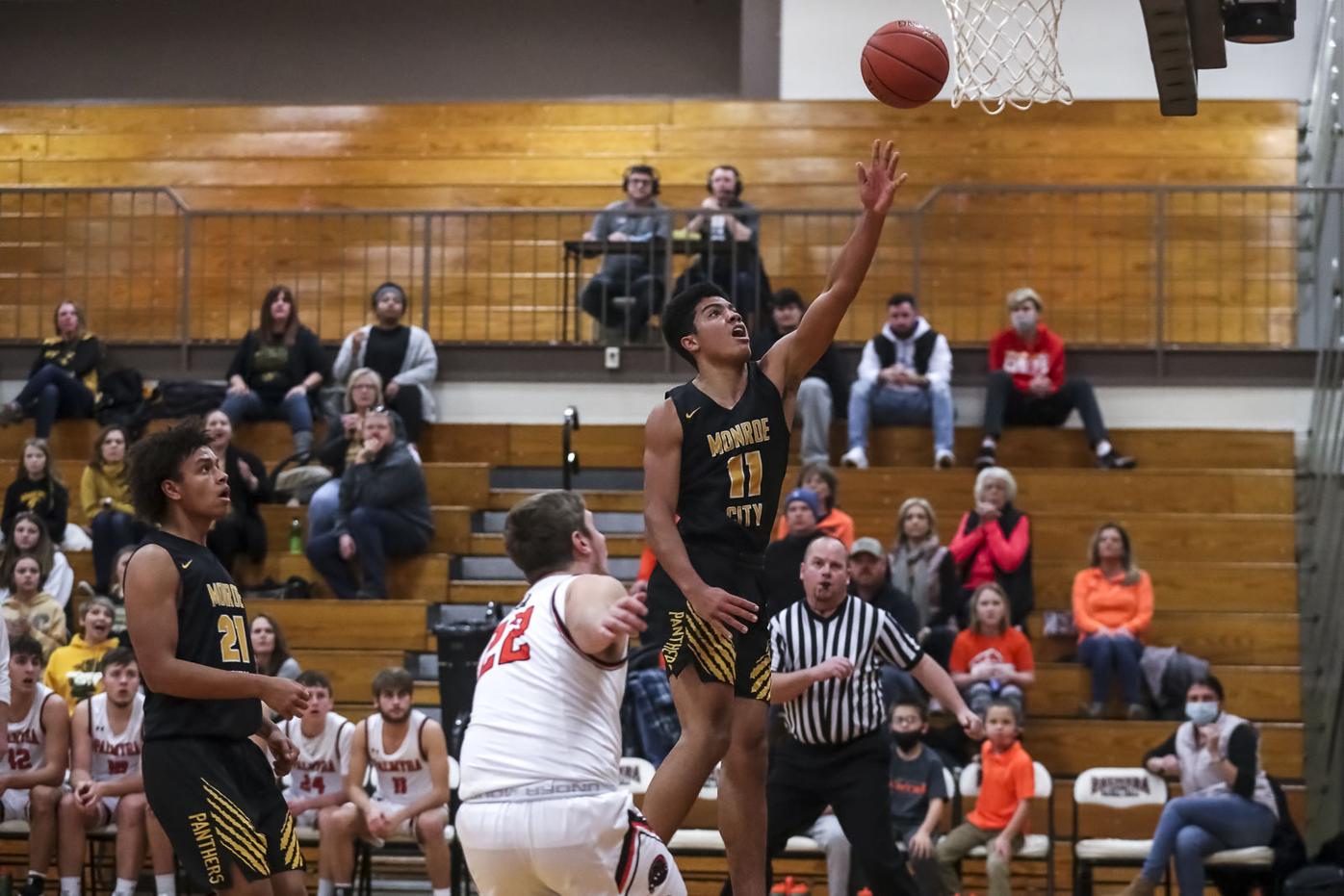 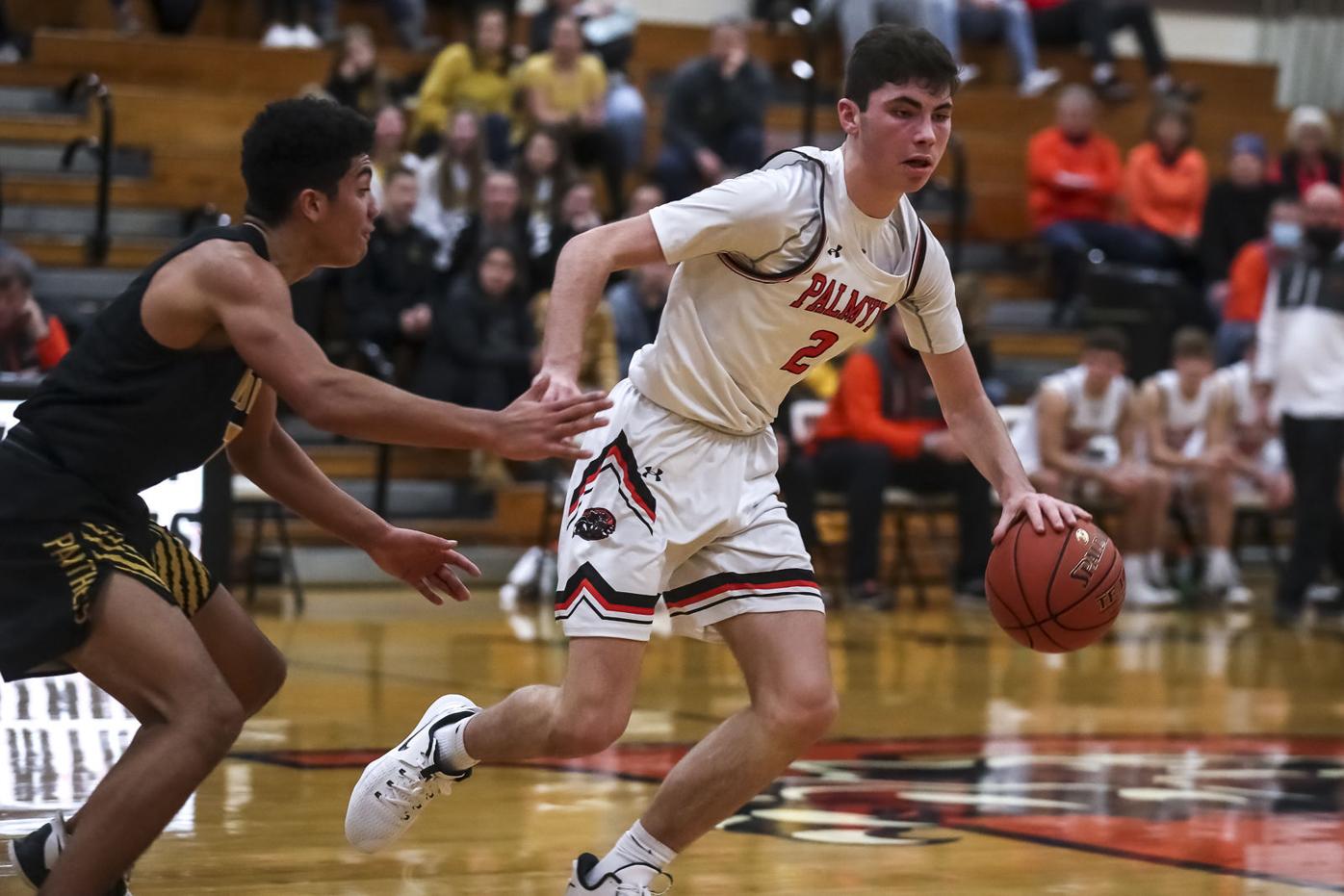 Palmyra freshman Bear Bock, right, dribbles the ball during Palmyra’s loss to Monroe City in the championship game of the Tony Lenzini Basketball Tournament on Saturday in Palmyra, Mo.

Palmyra freshman Bear Bock, right, dribbles the ball during Palmyra’s loss to Monroe City in the championship game of the Tony Lenzini Basketball Tournament on Saturday in Palmyra, Mo.

Its the first time in the 78 year history of the Tony Lenzini Tournament Monroe City has won three straight, and its the third tournament title for Monroe City this season.

“Each year poses different obstacles or challenges,” Monroe City coach Brock Edris said. “It’s always a good test for us to come down here. We love the environment. Palmyra does a great job of hosting the tournament.”

The final score might not have shown it, but Palmyra ended the first quarter with a 12-11 lead. Freshman forward Bear Bock nailed three 3-pointers in the first half and finished the game with a team-high 10 points.

“(Palmyra) hit a few shots from the perimeter, which they’ve got plenty of very good shooters,” Edris said. “We let some guys get away from us and knock down some shots. I thought the Bock kid did a great job stepping in as a freshman handling the ball on the full court.”

Momentum started to shift in the second quarter, with Monroe City taking a 28-21 lead into halftime. Palmyra coach Ryan Wood said his team gave up some soft turnovers and did not take care of the ball.

“We’ve struggled to score this year and we’ve got to be more aggressive,” Wood said. “We tend to think we are going to live on the 3-point line. Well, we are a better team when we get to the middle and we got to concentrate on getting better at that.”

Palmyra (6-6) was unable to find any answers on slowing down Monroe City junior guard Joshua Talton, who led the team with 22 points and nine rebounds.

“He’s very quick and gets some steals and can finish around the rim,” Edris said. “He found some seems to find the rim and get offensive rebounds. He’s physical, he’s strong and he can stretch the floor.”

Senior Logan Buhlig also contributed a key 14 points and pulled down five rebounds and forward Jaedyn Robertson, making his return to the court after being sidelined the last few games, scored 11 points off the bench.

“Logan has been pretty consistent for us,” Edris said. “Even if he’s not scoring a lot of points, he is impacting the game in a positive way. Whether if it’s defensively guarding a specific player, creating deflections on presses, getting rebounds or taking charges.”

The second half was all Monroe City (14-1), as it outscored Palmyra 38-15 in the final two quarters. Monroe City held a 17-point lead over Highland in the tournament semifinals and nearly allowed the Cougars to come back, closing the gap all the way to three, so Edris was glad to see his team keep its foot on the gas in the fourth.

“We struggle with times on putting a team away,” Edris said. “To do it against a very good team like Palmyra on their home floor says a lot about our kids’ effort tonight.”

“They are physical, and they are up in your face,” Wood said. “We didn’t respond well to it. We’ve kind of gone from a full-out passing team to a handoff team, and tonight it just didn’t work.”

Aside from Bock, another bright spot for Palmyra was the play of senior forward Abe Haerr, who had a team-high 10 rebounds and scored nine points.

“I thought Abe played hard and let by example tonight with his effort,” Wood said. “I was proud of Abe. I thought he stayed with it and stayed active on the boards.”

Edris and his team have a big week ahead. Monroe City travels to face Highland for a rematch of the Tony Lenzini semifinals on Tuesday, then plays hosts to 11-2 Blair Oaks on Friday.

“It will be a big game on Tuesday at Highland,” Edris said. “They will be very confident with the way they played against us. There are plenty of challenges ahead.”