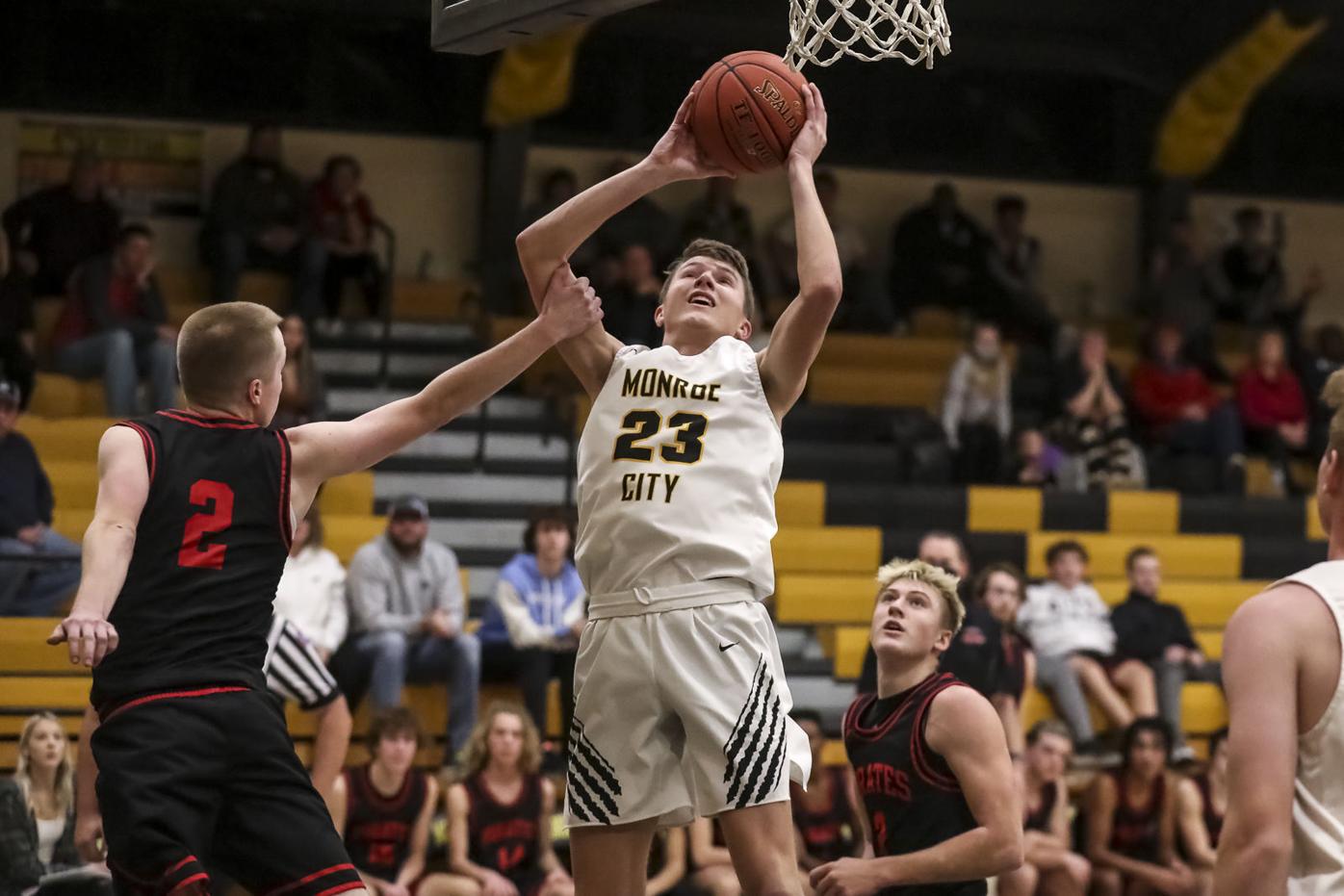 Monroe City’s Logan Buhlig, center, is fouled on a shot attempt by Hannibal’s Treysn Roland, left, during the Panthers’ victory over the Pirates Tuesday night in Monroe City, Mo. 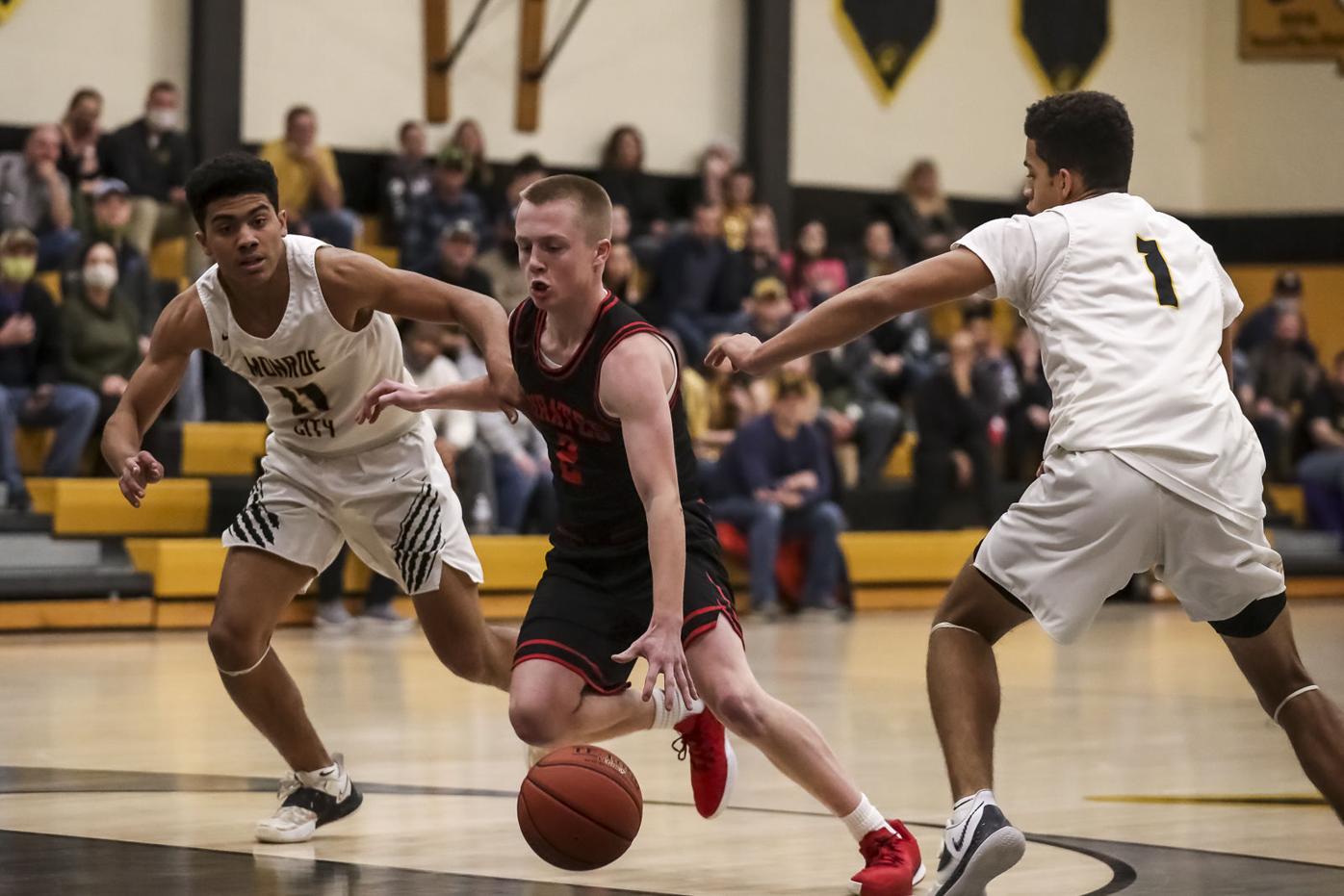 Monroe City’s Logan Buhlig, center, is fouled on a shot attempt by Hannibal’s Treysn Roland, left, during the Panthers’ victory over the Pirates Tuesday night in Monroe City, Mo.

MONROE CITY, Mo. — The Monroe City boys basketball team struggled to score in the first half and found itself behind before turning the game around in the fourth quarter to defeat Hannibal 53-37 at home on Tuesday evening.

The Pirates were able to slow down the Panthers’ prolific offense, holding them to just 21 points in the first half.

“They weren’t going to give us anything early in our possession that would be a good shot,” Edris said. “In the second half, we decided to simplify things and spread the defense out a bit. Get Josh (Talton) the ball in the scoring area and let him be a playmaker.”

The Pirates took a 23-21 lead into halftime, scoring 17 points in the second quarter to take the lead.

Part of that early success for the Pirates’ came from knocking down threes. Hannibal guards Courtland Watson, Tristen Terrill and Aaris Stolte combined to make five 3-pointers, four of those in the second quarter.

“That’s definitely the strength of the team,” Hannibal coach Marty Hull said. “We’ve got four really good guards who can shoot it. They are also unselfish. They don’t care, whoever is open will get that pass out to them. They are just as excited to for a teammate to make a three as they are.”

Hannibal (3-6) opened the second half with momentum on their side, and at one point took extended its lead to 32-23. Edris called a timeout and Monroe City (10-1) changed momentum.

“We got some deflections and did a better job on the offensive glass,” Edris said. “It kind of kept them out of rhythm, keeping them out of the full court and raising the intensity of the game.

“Kind of sped them up faster than they wanted to play.”

Before long, Monroe City had narrowed the gap to just three points. Then junior guard Kyle Hays hit four free throws to give the Panthers a 35-34 lead.

“Kyle got fouled when he attacked the rim,” Edris said. “Got a kid up in the air and created a foul and (Hannibal) got a technical foul. He went and knocked the free throws down.”

The Panthers went 20 for 22 from the free throw line, which played a major role in the comeback effort. Monroe City never trailed again after Hays gave them the advantage.

Despite giving up the lead, Hull was proud of his team’s defensive intensity.

“You look at the stats and (Monroe City) is scoring 70 to 80 points in most games,” Hull said. “To hold them to 53, I’m pretty excited. We had been there with them, but only playing seven or eight (players), I think our legs wore down a little bit.”

Hull added that he felt that his offense had trouble staying in control in the second half.

“I think we just let the home court and their physical play get to us,” Hull said. “It got kind of chippy there. There was some trash talk going on and that’s fine. That happens over the course of a game, and I think they got in our head a little bit.”

Monroe City senior forward Logan Buhlig scored a game-high 20 points and also led his team with seven rebounds. Talton was second on the team with 12 points.

“His length helps out a lot, and creates some things on defense,” Edris said of Buhlig. “Offensively, he hit some big free throws in the game. He’s always been deadly from the perimeter and can make an impact at multiple levels.”

Terrill and Stolte tied for the team lead for Hannibal with 12 points. Terrill also led the Pirates with five rebounds.

Hull said his team’s effort was the best it had been all year, and if they continue to play like that they ca be successful moving forward.

“It’s traditional here in Hannibal the time football and soccer players get it together, a lot of times it’s into January or February when we really start playing good basketball,” Hull said. “So, I’m really hoping this is the roller coaster coming up and peaking right now.”