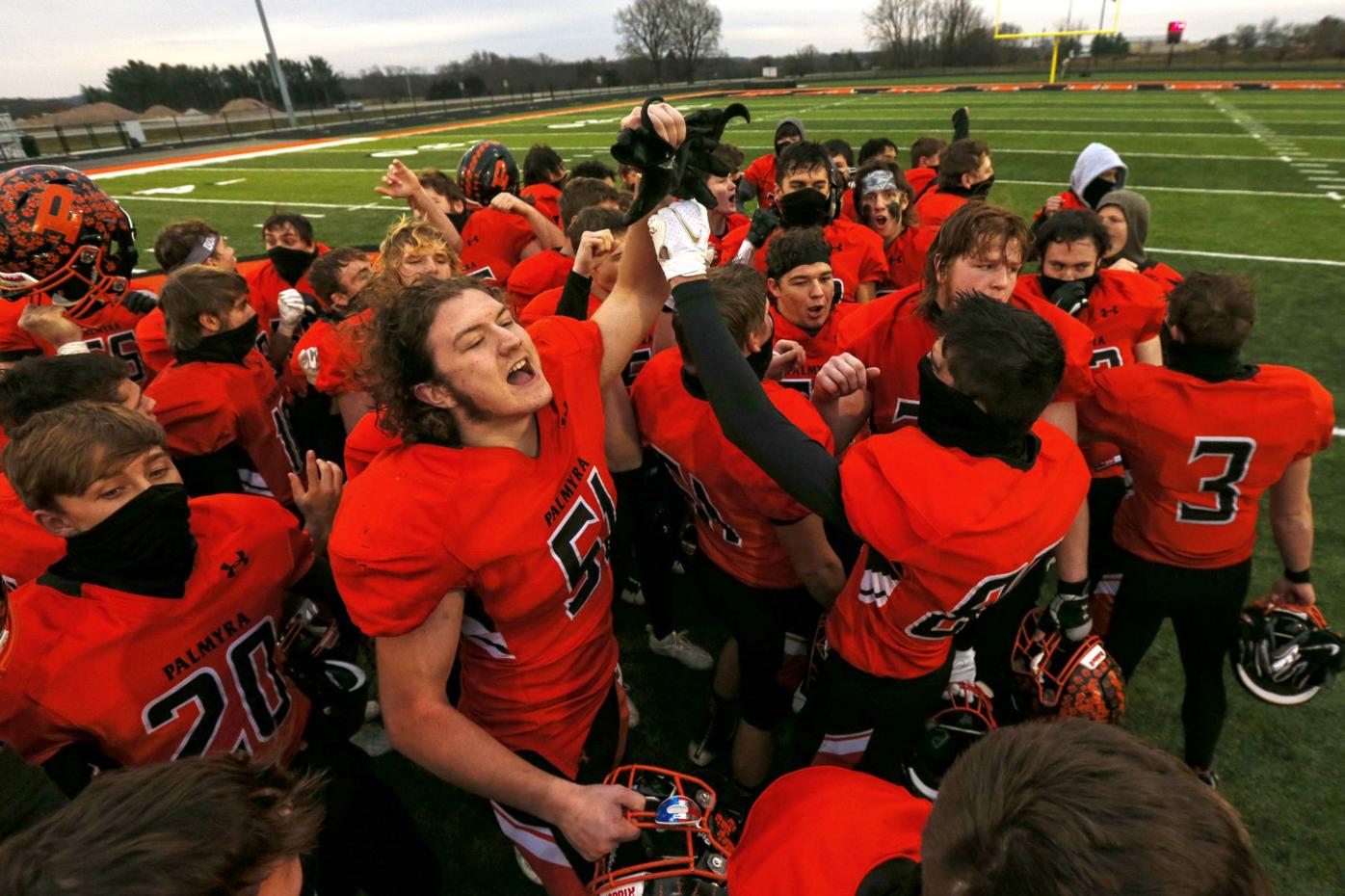 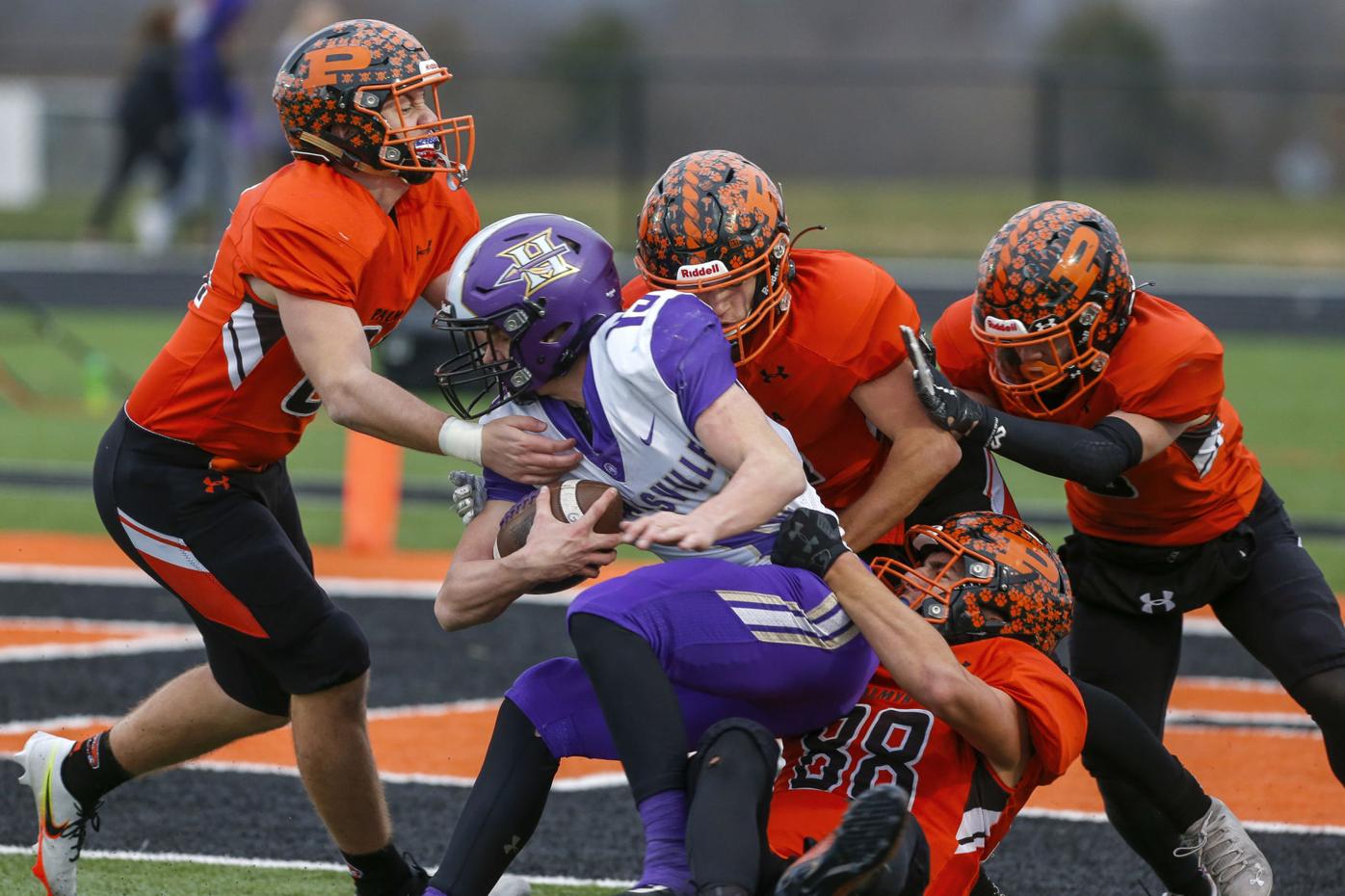 Hallsville's Ryan Roberts, center, is brought down by the Palmyra defense in the second half of the Panthers' victory over the Indians in the Class 2 state quarterfinals on Saturday in Palmyra, Mo. 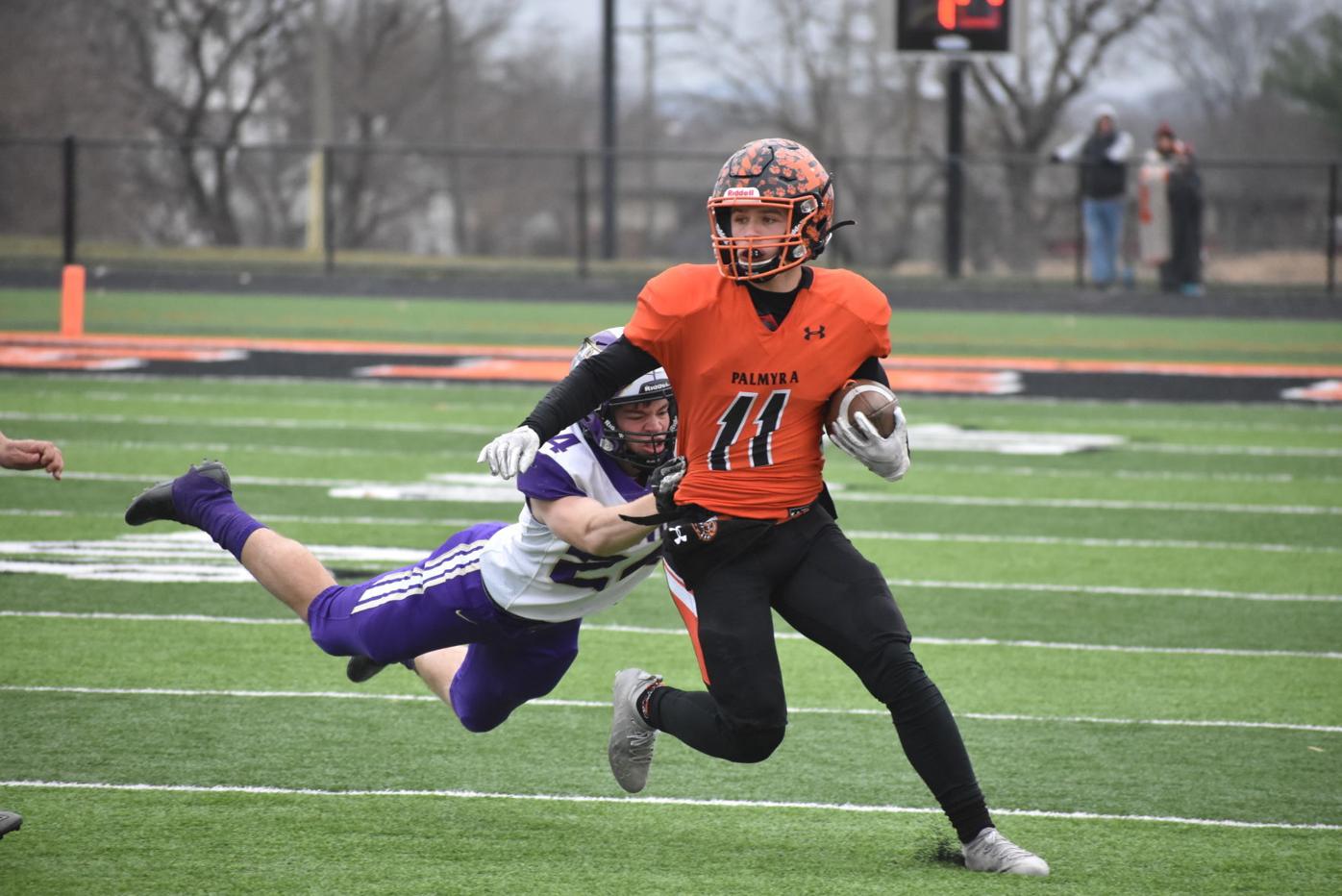 Palmyra senior wide receiver Zane Meyers, right, sheds a Hallsville tackler on his way upfield during the Panthers' victory over the Indians in the Class 2 state quarterfinals on Saturday in Palmyra, Mo. 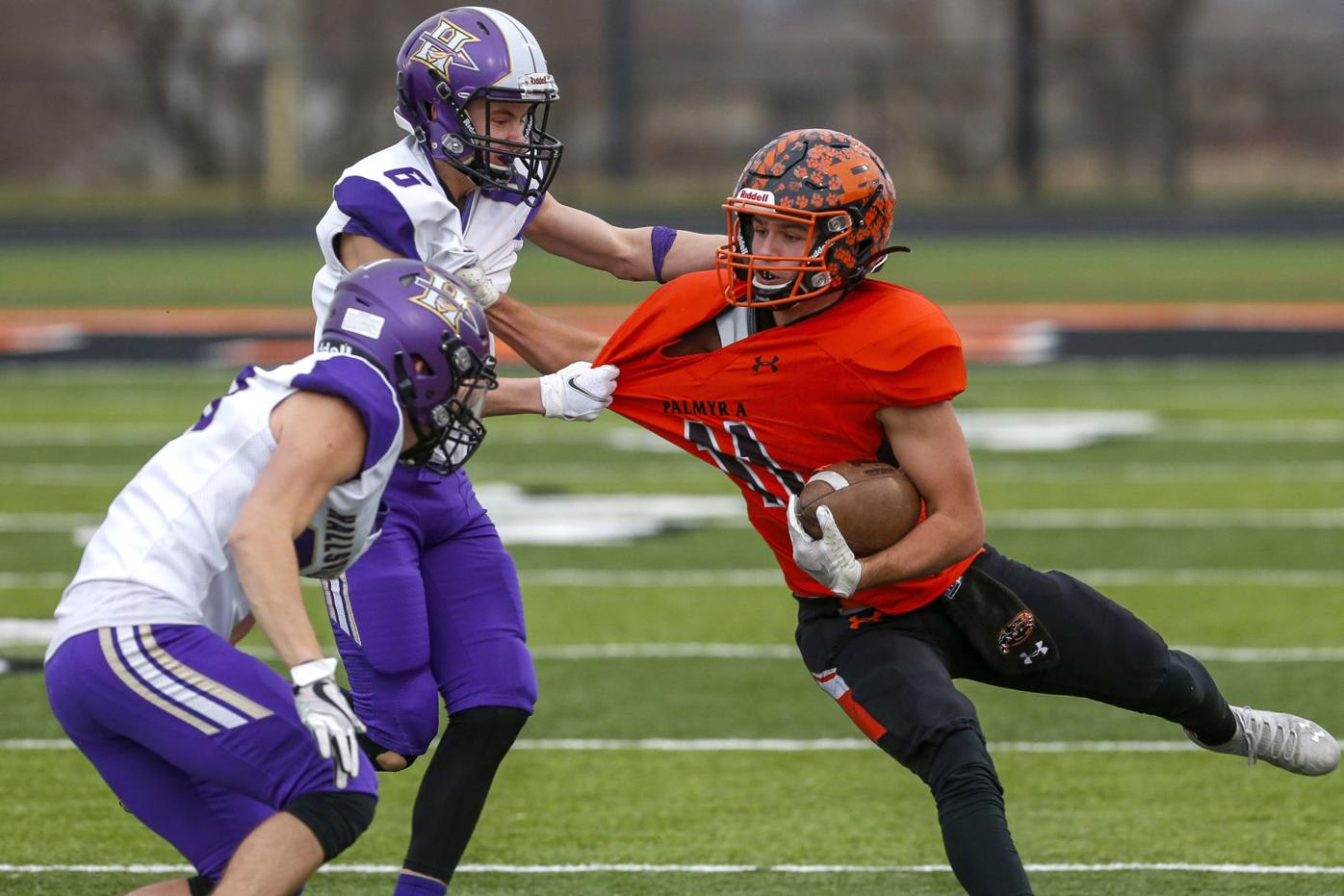 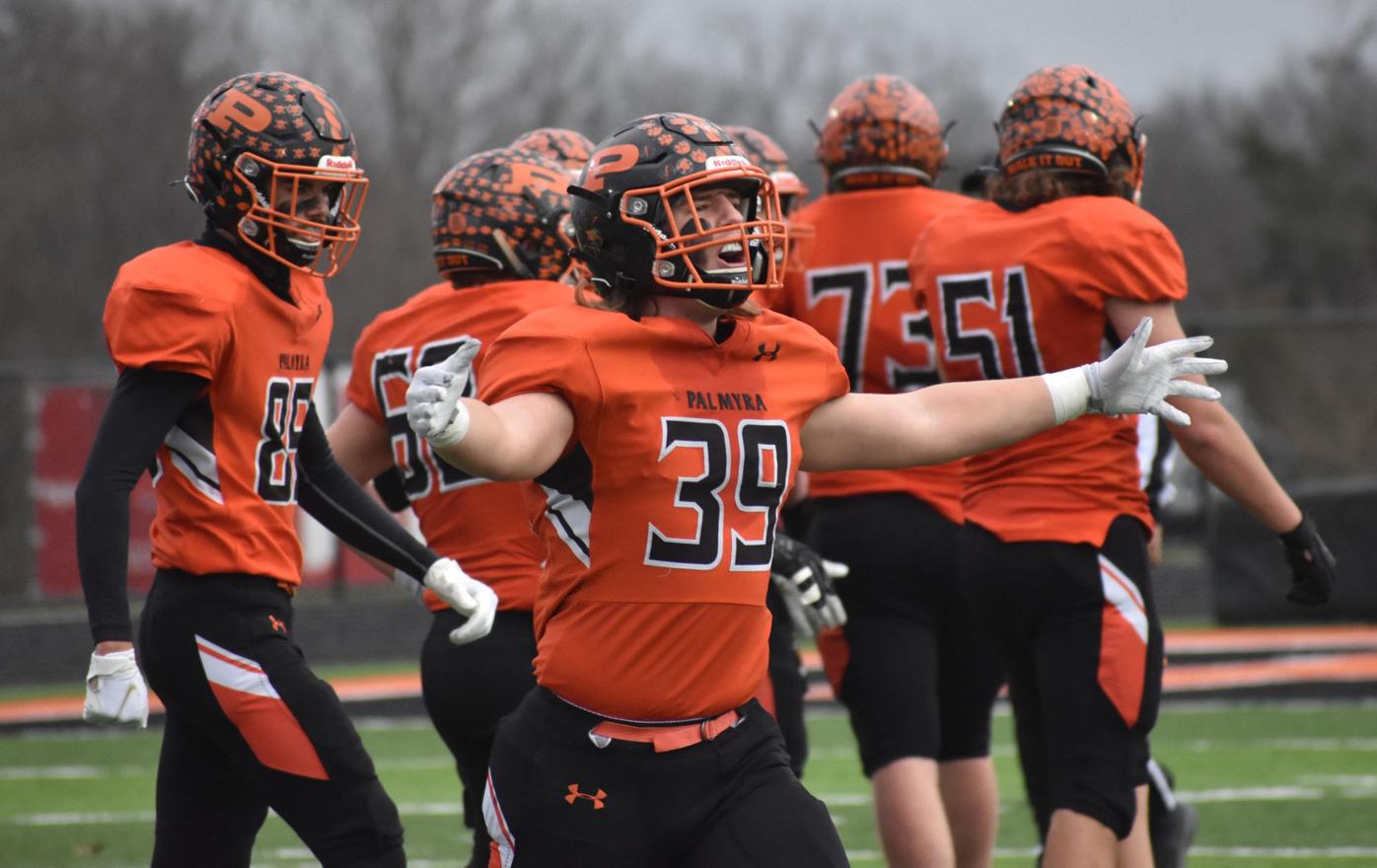 Palmyra linebacker Nolyn Richards, center, hypes up the home crowd after the Panthers defense forced a fumble during the second half of Palmyra’s Class 2 state quarterfinal victory over Hallsville on Saturday in Palmyra. 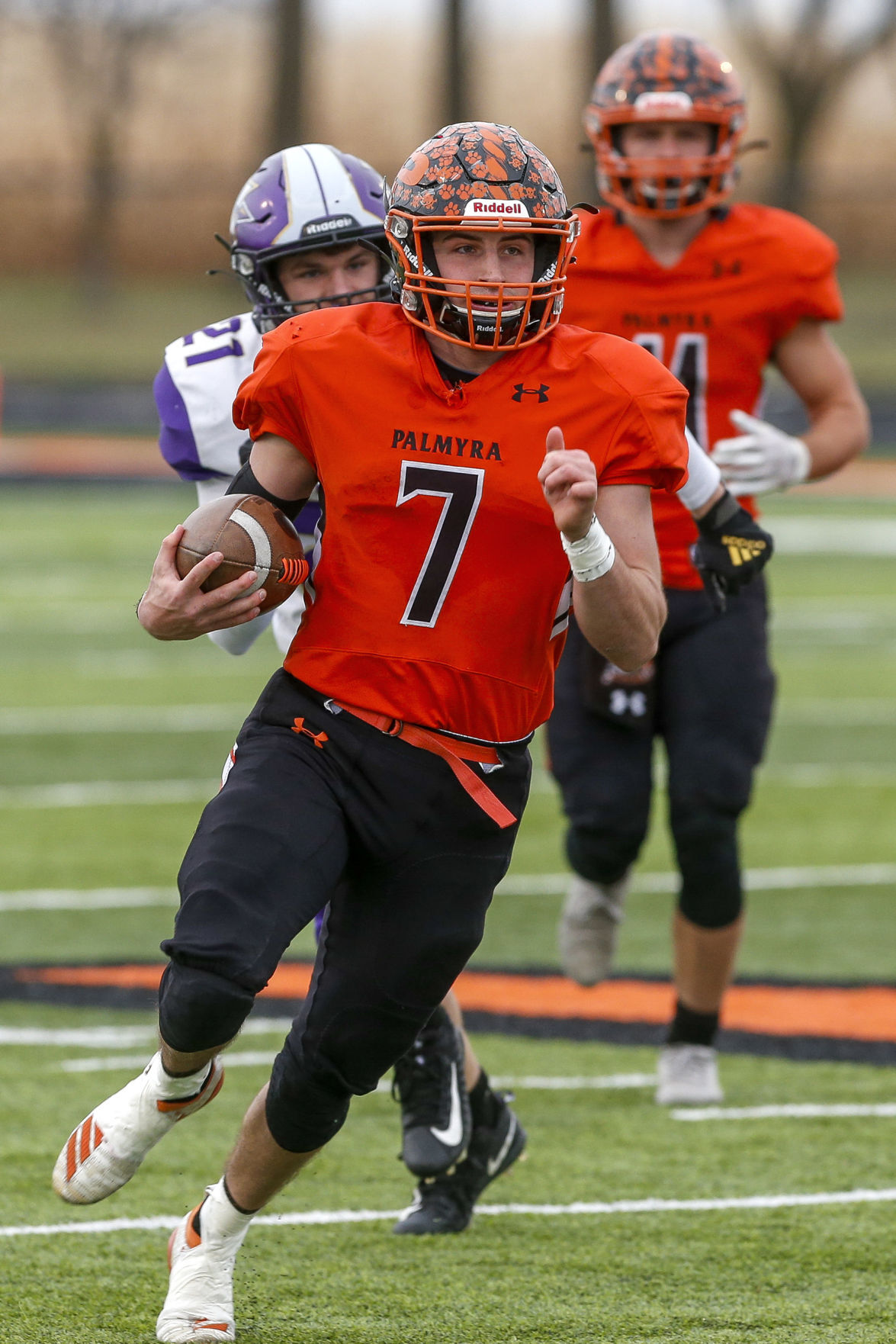 Palmyra running back Ross Arch, center, breaks loose for a 30-yard run during the second half of the Panthers’ victory over Hallsville on Saturday in the Class 2 state quarterfinals in Palmyra, Mo.

Hallsville's Ryan Roberts, center, is brought down by the Palmyra defense in the second half of the Panthers' victory over the Indians in the Class 2 state quarterfinals on Saturday in Palmyra, Mo.

Palmyra senior wide receiver Zane Meyers, right, sheds a Hallsville tackler on his way upfield during the Panthers' victory over the Indians in the Class 2 state quarterfinals on Saturday in Palmyra, Mo.

Palmyra linebacker Nolyn Richards, center, hypes up the home crowd after the Panthers defense forced a fumble during the second half of Palmyra’s Class 2 state quarterfinal victory over Hallsville on Saturday in Palmyra.

Palmyra running back Ross Arch, center, breaks loose for a 30-yard run during the second half of the Panthers’ victory over Hallsville on Saturday in the Class 2 state quarterfinals in Palmyra, Mo.

Panthers coach Kevin Miles could have had his offense run out the clock and take the six-point lead into halftime, but he chose to try for a quick score. Hayes Miller took a jet sweep 10 yards on the first play of the drive, then a late hit penalty on the Indians set up Palmyra inside the Hallsville 40-yard line.

Three plays later, Panthers quarterback Brody Lehenbauer connected with Collin Arch for a 26-yard touchdown pass with no time left on the clock, and after a 2-point conversion Palmyra held a 36-20 lead at halftime.

The Panthers received the opening kick of the second half and drove in for another score, with Ross Arch capping off a four-minute drive with a 1-yard touchdown run, and that was all the breathing room Palmyra needed as it defeated Hallsville 44-30 for a spot in the Class 2 state semifinals.

“It was a big momentum changer for the team I think,” Ross Arch said of his brother Collin’s touchdown catch. “It was really important to get that right before the half.

“I’ve got to be proud of him, but I will also have to give him crap later for something he probably did wrong in the game.”

“It means a lot, but we’ve only had one team go to the state championship game,” Lehenbauer said. “We want to fill those shoes and get right back in there, then hopefully we can win it.”

If the Panthers start like they did Saturday, it will be tough to keep up. Palmyra held Hallsville (7-5) to a three-and-out on its first possession, a possession that was lengthened by an injury to Hallsville running back Harrison Fowler that required Fowler to be taken off the field on a stretcher.

After Palmyra received its first offensive possession, nearly 30 minutes after kickoff, it took a minute for the Panthers to get going. Zane Meyers provided the jumpstart.

Meyers turned a catch on 3rd and 15 into a 55-yard touchdown run, sprinting past a block from Abe Haerr at the 5-yard line to get into the end zone.

“That was really important,” Meyers said. “Hallsville is a really good team and they were prepared, but we came out and got that momentum.”

Another Hallsville 3-and-out and punt set up Palmyra on the Indians’ 41, and just over a minute later Lehenbauer hit Meyers for his second touchdown, this one a 22-yard reception between two defenders right on the goal line.

Meyers finished with six catches for 121 yards and two touchdowns.

“He is just a freak. I think he’s the most underrated receiver in the Tri-State area,” Lehenbauer said of Meyers. “Nobody was saying his name for a long time on the offensive side of the ball at the beginning of the year, but that kid is just dominating. Nobody can tackle him. He’s always the guy that gets open.”

Lehenbauer didn’t have the kind of day he wanted, but he was effective when he needed to be. He completed just 4 of 12 passes in the first half, but three went for touchdowns. He finished 8 of 17 for 163 yards and three touchdowns.

Miles trusts his quarterback because of that ability to deliver when it matters most.

“He is hard on himself,” Miles said. “He came out a couple of times and told me this and that. I’m like, ‘Dude you’re going to be fine. You’ve just got to keep believing and keep making good decisions.’

“That drive at the end of the half was phenomenal.”

Even with the completion to Collin Arch to end the first half — which ended a streak of eight straight incompletions — Lehenbauer understood his arm wasn’t the best option against the Indians.

“I felt in the first half we were running the ball as much as we wanted to. Their defense was putting up no fight to our run game, and I put our offense in some tough situations throwing the ball in the first half,” Lehenbauer said. “In the locker room, we were talking and I told the line they were dominating at the line of scrimmage, so we knew we could run the ball.”

Palmyra came out and ran nearly exclusively on its opening drive of the second half, with Ross Arch carrying the ball five times for 53 yards on his way to the 1-yard touchdown run that put the game away.

Arch finished with 86 yards and two touchdowns on 13 carries. Miller led the Panthers in rushing with 91 yards, including a 54-yard scamper for a touchdown in the first half, and the Panthers ran for 275 yards total.

Miller’s return to the lineup was helpful, as was Wade Begley’s, who ran for 36 yards on eight carries in his first offensive snaps since suffering an injury in Week 6.

“I’m glad to see him back. I know he really wanted to be back in at running back,” Arch said of Begley. “It kind of helps keep both me and him fresh at the same time, offensively and defensively.”

The offensive line is happy to have its one-two punch back, too.

“We are so lucky to have them both,” senior lineman Josh Lickfeld said. “Ross makes all these cuts and you just can’t tackle Wade. They are both phenomenal.”

They both got it done defensively, too. Begley finished with five tackles and a fumble recovery, while Arch had four tackles and did his best to chase around a talented group of Hallsville receivers.

No one had a bigger defensive impact than Weston King, however. King led the Panthers in tackles for a second straight game with eight, including three sacks and four tackles for loss.

“He had a really phenomenal game,” said Lickfeld, who finished with half a sack and 3.5 tackles for loss. “It’s really a once-in-a-lifetime thing to play next to a guy like that. We always go back and forth with tackles and everything, but we are really lucky to have him.”

Lehenbauer once again thanked his fortunes he is protected by the Palmyra linemen, not hounded by them.

“It wasn’t just Weston either. I saw Zane put a stick on (Cobb), Collin put a stick on him, that kid was getting lit up by every single player,” Lehenbauer said. “I don’t know if he could stand after this game tomorrow.”

Cobb finished 22 for 31 for 302 yards and three touchdowns, with half of those catches and 191 going to receiver AJ Austene.

“They had some stud receivers,” Arch said of the Indians’ passing attack. “It was pretty tough, we had to make some adjustments throughout the game but we got the job done.”

The Panthers are now just one game away from their second-ever state championship appearance.

“Everybody on our team has been working to get to this point since we were little kids,” Lickfeld said. “Now getting to this point and hopefully getting past this point, that means everything.”