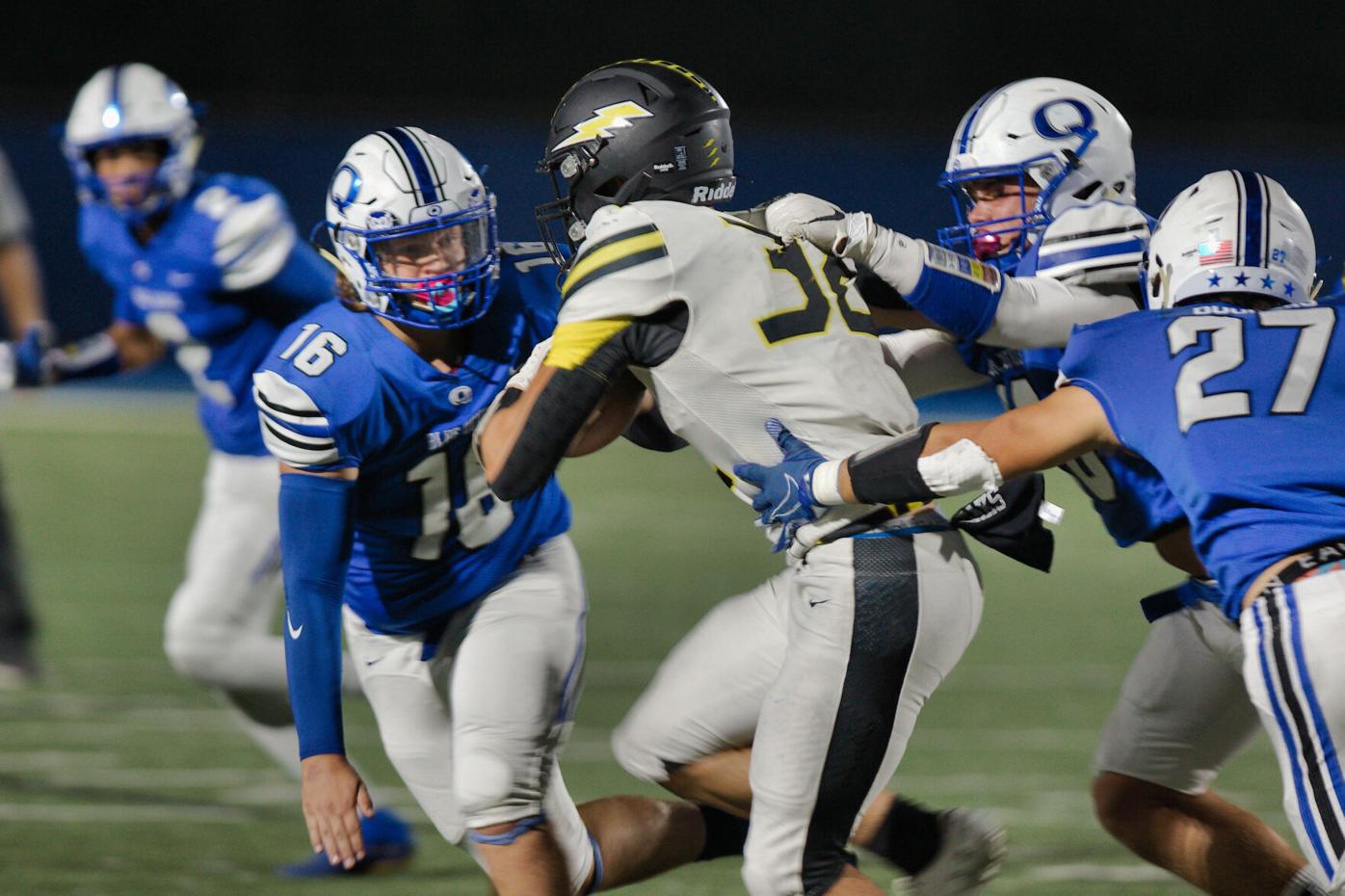 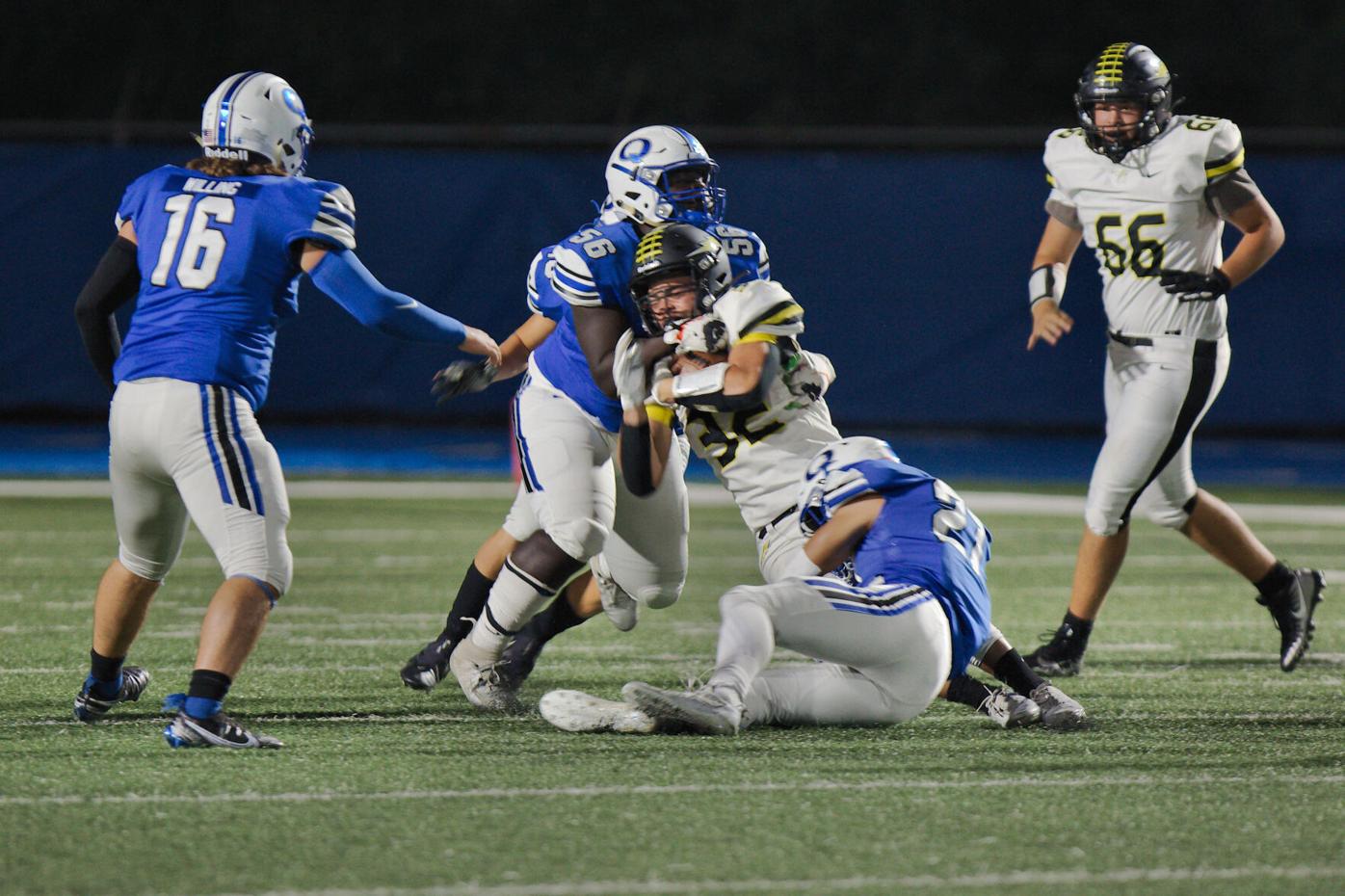 Silver Streak Alexavier Egipciaco (32) is stopped by the Blue Devils defense during Friday’s game in Quincy.

Silver Streak Alexavier Egipciaco (32) is stopped by the Blue Devils defense during Friday’s game in Quincy.

QUINCY — Quincy High School football coach Rick Little knew there would be growing pains for his Blue Devils this fall. With a roster thin on senior experience, QHS has relied on many younger players this season.

“We’re going to grow up one day,” Little said after his team fell to 2-3 overall and 1-2 in WB6 play. “Hopefully sooner than later. It’s time now. … It’s time for us to play and make those stops. We’re not doing that consistently. The defense is on the field for a long time. There are a lot of things that we have to get better at, but I think we have the right guys to do it.”

On Friday night, the Silver Streaks rode a dominant effort by their offensive line to their second straight win after opening the season with three losses. Galesburg pounded out nearly 300 yards on the ground and dominated time of possession.

Galesburg’s defense came up with two huge plays to hand the Blue Devils their third home loss in as many tries this season. After taking a 14-9 lead with just under two minutes to play after a 5-yard touchdown run by Amarie Richardson, the Silver Streaks defense came up with a huge defensive play. Linebacker Damian Thomas picked off a pass by Quincy’s Adon Byquist, setting the Streaks up deep in QHS territory.

Five plays later, Cameron Aguirre scored from 4 yards out with just 17.6 seconds left in the first half for a 21-9 lead.

“We wanted to be aggressive there at the end of the half and we threw the pick,” Little said. “That really hurt. It felt like we could overcome that one score, but that second (interception) was a kick in the teeth.”

Aguirre played a huge role in putting nail in the QHS coffin. A 59-yard run by senior tailback Shammy Gay set up the Blue Devils with a first-and-goal at the Streaks’ 10-yard line. On third-and-goal from the 10, QHS quarterback Bradyn Little threw a pass that was tipped at the goal line. Aguirre snagged the pass and rolled down the left sideline for a 100-yard interception return, giving the Streaks a 28-9 lead with 2:30 left in the third quarter.

From there, the Streaks grinded the game out. On its next possession, the Streaks went 85 yards in 15 plays, eating nearly 8 ½ minutes off the clock. Richardson waltzed in from 4 yards out with 4:42 to play to cap the scoring.

Galesburg finished with 296 yards rushing on 51 attempts. Alexavier Egipciaco led the way with 113 yards, all of which came in the first half. Richardson added 93 yards, while Aguirre chipped in 72.

The Blue Devils managed just 170 yards of offense. Byquist had 99 yards through the air, while Quincy had just 64 yards rushing on 12 attempts. Gay’s long scamper accounted for nearly all of the team’s yardage on the ground. Peyton Weech had four receptions for 66 yards.

“Ultimately, we need to get where we can run the football more and better,” Little said.

The Blue Devils will try to get back on track next week when they play at WB6 co-leader Sterling. The Golden Warriors (4-1) improved to 3-0 in WB6 play with a 31-0 victory over Geneseo on Friday night.