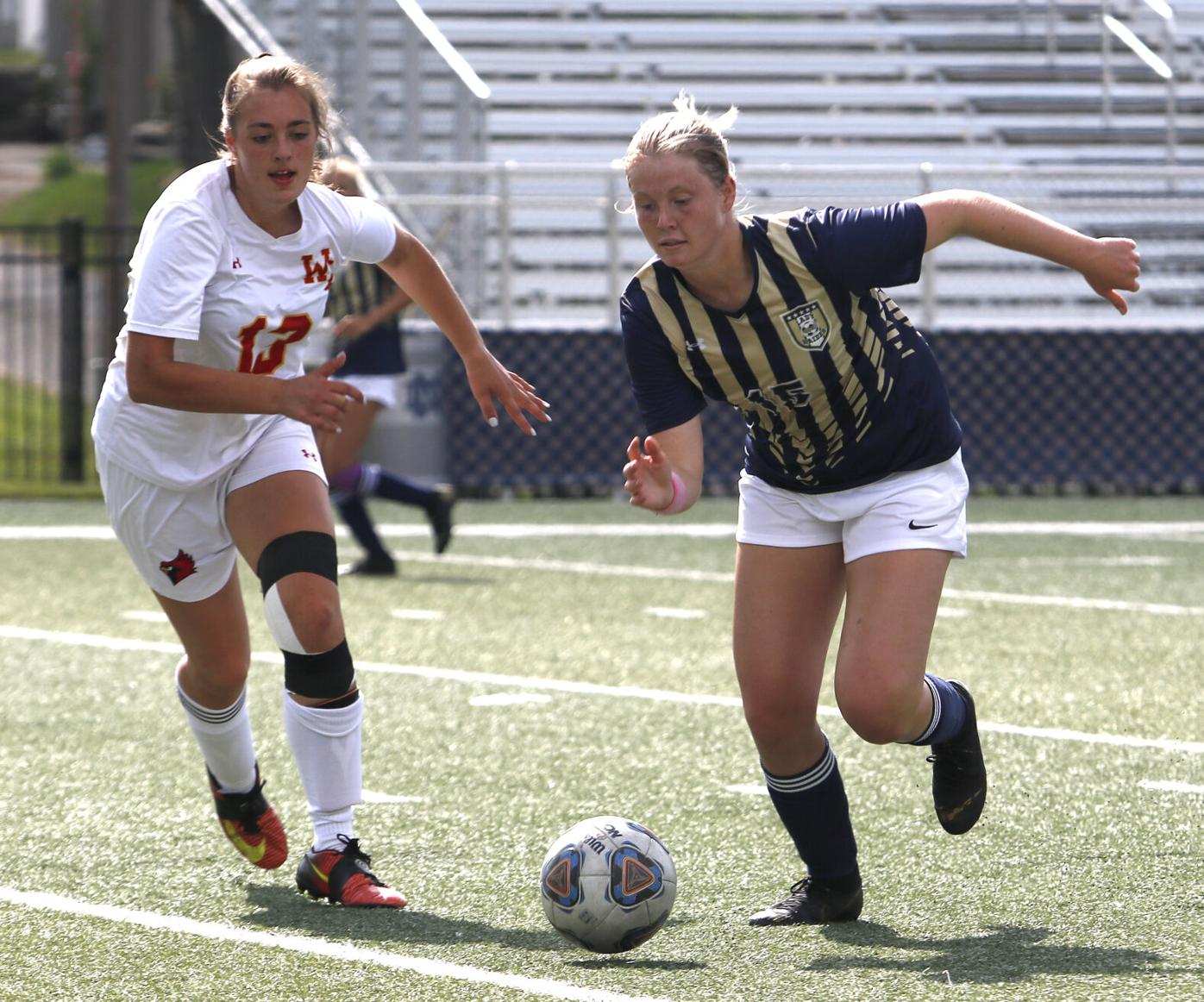 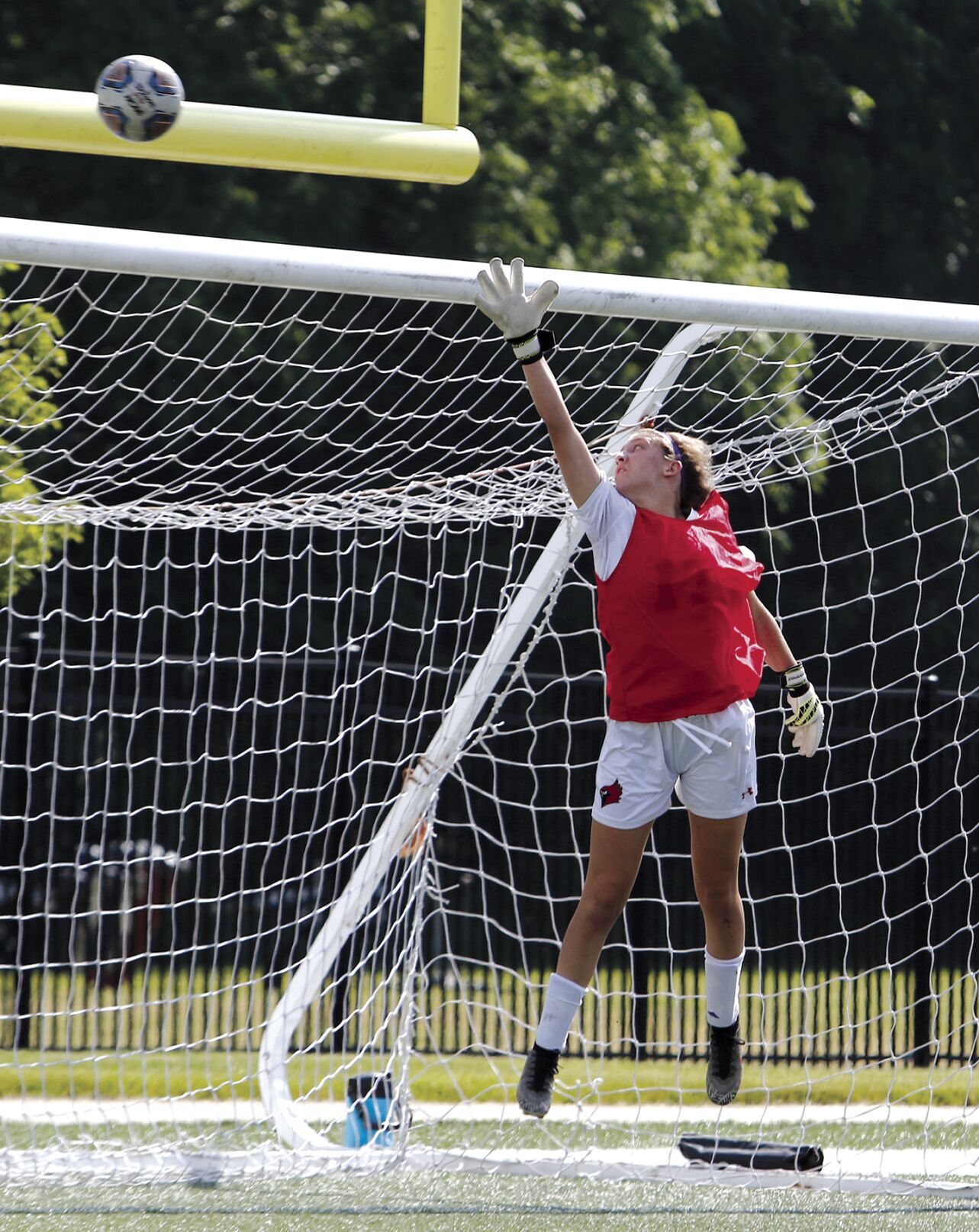 The Warrensburg-Latham goalkeeper leaps as a free kick from Quincy Notre Dame’s Ellie Peters goes over the crossbar during Tuesday’s Class 1A sectional semifinal at Advance Physical Therapy Field.

The Warrensburg-Latham goalkeeper leaps as a free kick from Quincy Notre Dame’s Ellie Peters goes over the crossbar during Tuesday’s Class 1A sectional semifinal at Advance Physical Therapy Field.

QUINCY — Mark Longo knows everything gets harder from here.

He only hopes the Quincy Notre Dame girls soccer players realize that, too.

The Raiders legendary coach — the only coach in the history of QND’s program — watched his team score twice in the first eight minutes of Tuesday’s Class 1A sectional semifinal against Warrensburg-Latham.

That’s when the quality, pace and style of play become mundane.

“Just as quick as we scored them, we were as quick to become disinterested,” Longo said.

Finally, with 12 minutes remaining in the half, senior midfielder Ellie Peters set up sophomore forward Eva Dickerman, who slotted a shout of the reach of the goalkeeper to snap the Raiders back to life. They led 4-0 at halftime and finished off a 7-0 victory at Advance Physical Therapy Field to earn the chance to play at home one more time.

QND (15-1-1) will face Pleasant Plains (17-4) at 5:30 p.m. Friday in the sectional championship. The Raiders beat the Cardinals 1-0 on May 19 when Lia Quintero scored four minutes into the game and the QND defense limited Plains to just three quality scoring chances.

“It’ll be interesting,” Longo said. “I just hope we come to play.”

Longo is confident with the right approach the Raiders can advance, but he also knows the Cardinals are riding a wave of momentum.

“Pleasant Plains has a nice team,” Longo said. “This is a team that challenges people.”

The Raiders weren’t challenged Tuesday despite the lull in their play.

Just 2:35 into the game, Quintero slipped a ball behind the defense to Sophie Gramke, who carried it into the box and finished to the short side for a 1-0 lead. Dickerman was tripped in the box minutes later and converted the penalty kick.

Dickerman’s goal with 12 minutes remaining in the half got QND back on track, and Quintero made it 4-0 when volleyed a cross from Lauryn Peters into the net.

In the second half, Gramke scored off an Avery Keck assist and then finished an unassisted goal for the 6-0 lead. Quintero headed in a rebound of Gramke’s shot that clanged off the crossbar, making it 7-0 and invoking the turbo clock.

At that point, it was time to move on to Friday.

Longo admitted in the postgame report he creates after each contest that he called it a lackluster effort.

“I put on there it was just an awful game to watch,” Longo said.