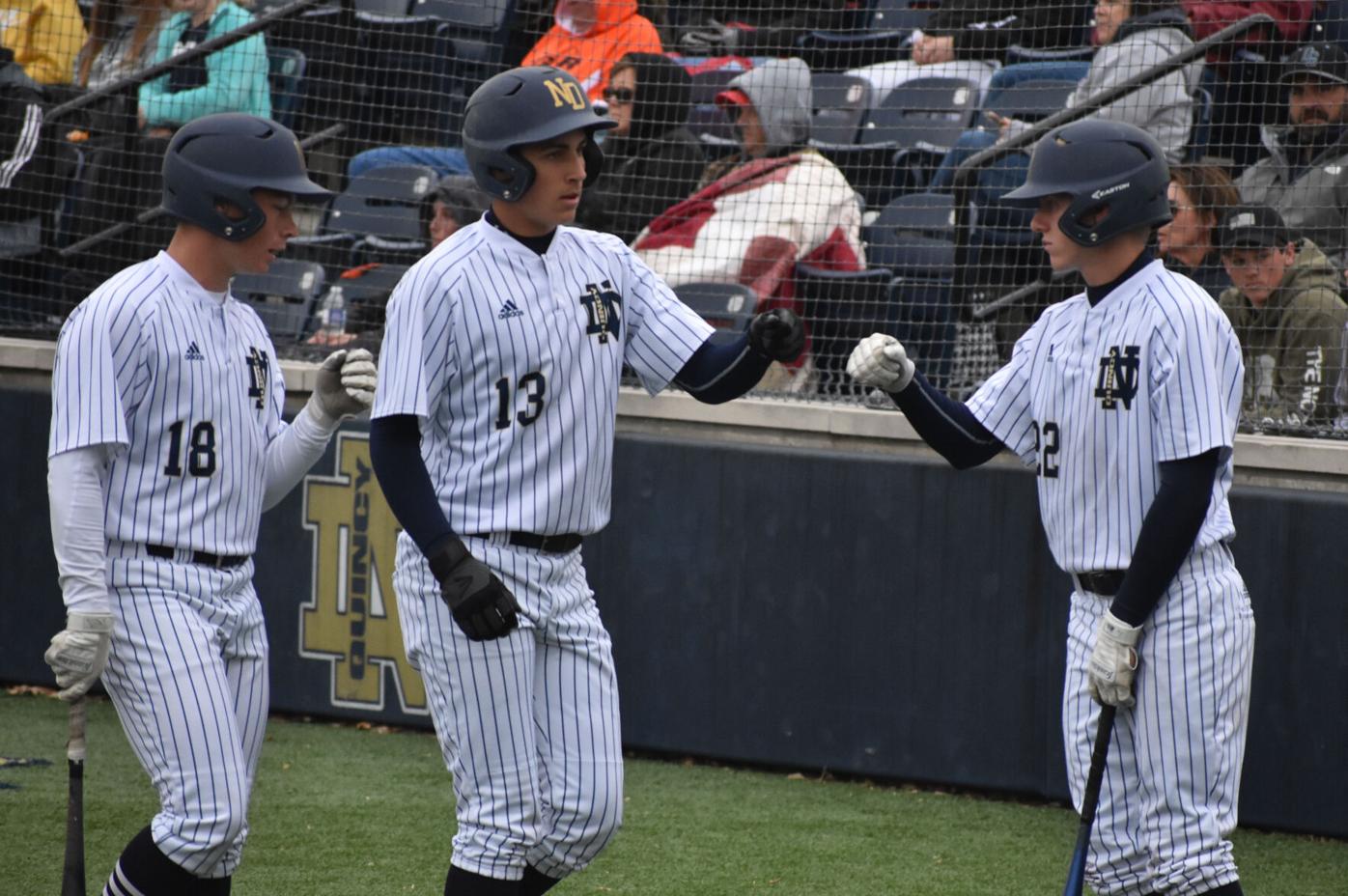 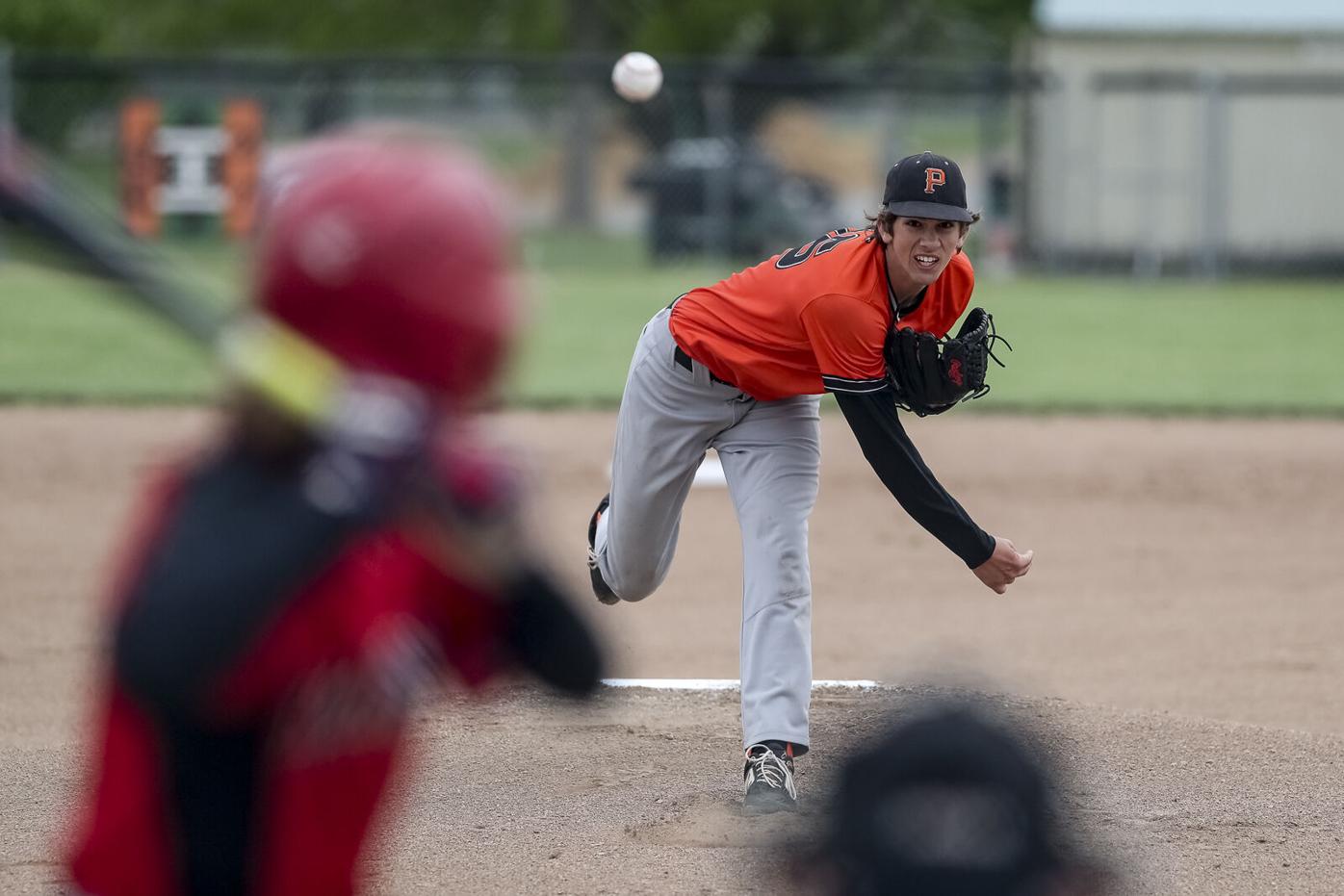 Palmyra starting pitcher Bennett Stice delivers a pitch to a Hannibal Batter during the Panthers game against the Pirates Saturday in Palmyra, Mo.

Palmyra starting pitcher Bennett Stice delivers a pitch to a Hannibal Batter during the Panthers game against the Pirates Saturday in Palmyra, Mo.

QUINCY — Momentum was a double-edged sword for the Quincy Notre Dame baseball team on Saturday.

The Raiders lost the first of two games at Ferd Niemann Jr. Memorial Ballfield when Jacksonville scored three runs in the top of the seventh inning to turn a tied game into an 8-5 loss. QND fell behind Kirksville 5-1 in the second game after the Tigers scored four runs in the top of the fourth, but the Raiders shifted the momentum back to their dugout with 12 runs in the bottom of the frame on the way to a 15-7 victory.

“Any other team that doesn’t have good character probably could have folded right there, but that shows me the fight that we have,” QND coach Ryan Oden said. “Usually during the year, when we play these games at the end, it gives me a gauge on if we are ready for the playoffs and I think we’re close. We’re getting there.”

A pair of walks started the bottom of the fourth for QND against Kirksville, then a double from Jack Linenfelser brought home Alex Connoyer to make the score 5-2. Two batters later, Harry Oden slapped a double of his own to bring home Brady Kindhart and Linenfelser and pull QND within one, then after a walk on the next at-bat, Ben Kaspaire tied the game with an RBI single.

Connoyer did the biggest damage later in the inning with a bases-clearing, three-RBI double, and Linensfelser had a second RBI single that brought home Connoyer to make the score 10-5.

“We struggled early on with their guy pitching, he’s pretty good, but he started to struggle and we were able to sit on fastballs, which we like,” coach Oden said. “The results were pretty good after that.”

The Raiders recorded 10 total hits for their 15 runs, with Linenfelser finishing 3 for 4 with three RBIs and two runs scored and Connoyer going 2 for 2 with two doubles, three RBIs, three runs and three walks. Jake Schisler was the winning pitcher, allowing seven hits and seven runs with six strikeouts over 4 2/3 innings of work.

The game against the Crimsons was tight throughout, but a bloop single from Quin Saxer brought home two runs for Jacksonville with one out away in the top of the seventh to put QND behind 7-5.

“We knew Jacksonville was going to be a really quality team coming in,” Oden said. “The result in that game was really just a little duck fart between second and short that fell in, and that’s the difference.”

“We learned a lot from that,” Oden said of the loss to Jacksonville. “They did a lot of little things that now I know we need to work on that we haven’t quite covered. It was a good learning lesson for the whole program.”

In the first game at Flower City Park on Saturday in the QND-Palmyra Slam, Palmyra held on for a 1-0 victory over Hannibal behind a magnificent pitching performance by Bennett Stice.

Stice pitched a complete-game two-hitter, allowing just one walk and striking out 10 batters in the process. Thomas Janes had a strong showing on the other side for Hannibal as well, throwing the complete game and allowing six hits and one unearned run.

Brody Lehenbauer was 2 for 4 for the Panthers and Alex Wilson was 1 for 2 with the lone run, scored off of a error in the bottom of the second.

Hannibal bounced back with a 15-0 shutout of Highland in three innings, with Aneyas Williams pitching a two-hitter with nine strikeouts. Charlie Culp added to his single-season RBIs record with three total RBIs, including a home run, on a 2 for 3 line. Tanner VanWinkle went 4 for 5 with five RBIs and three runs scored.