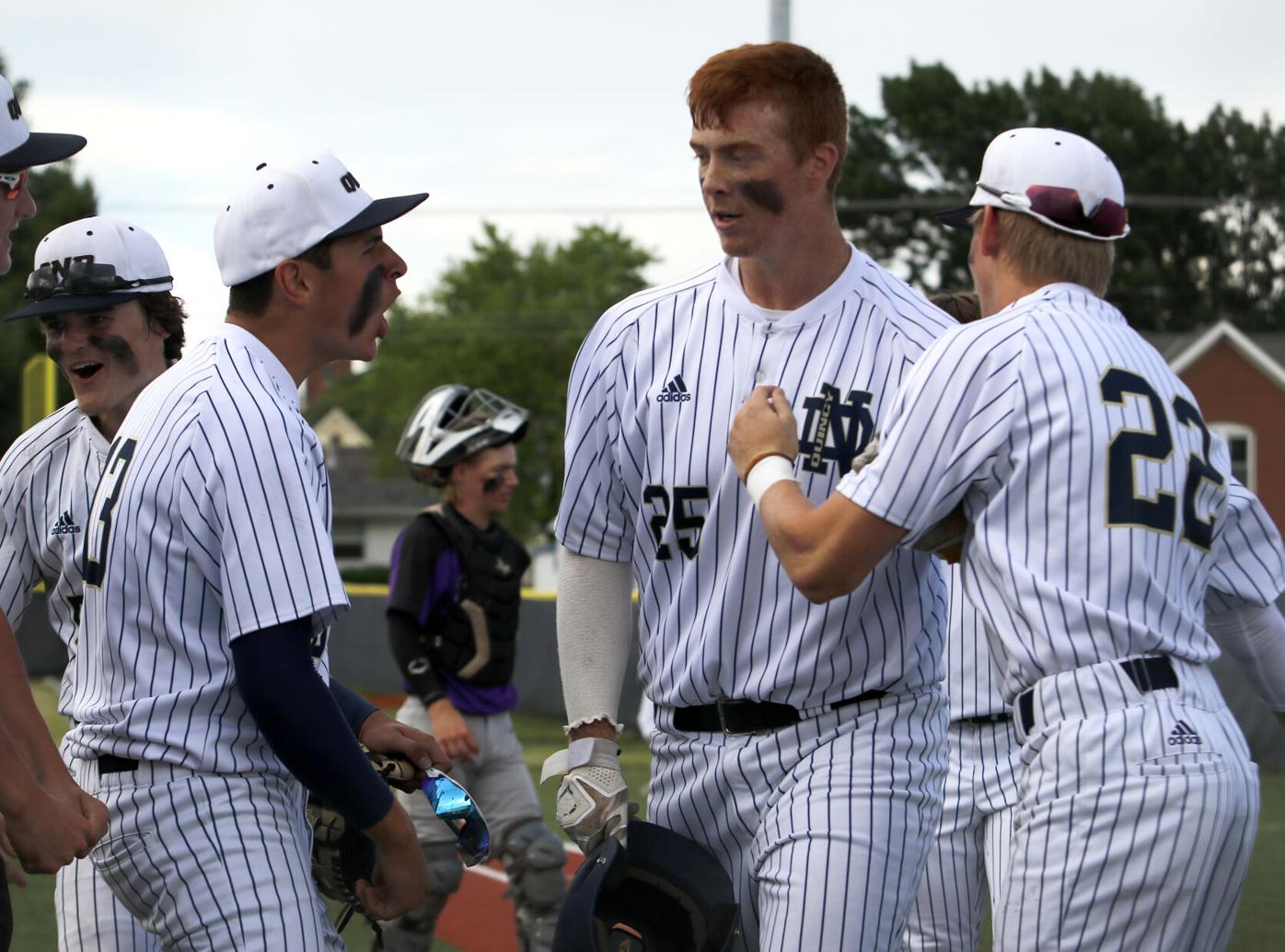 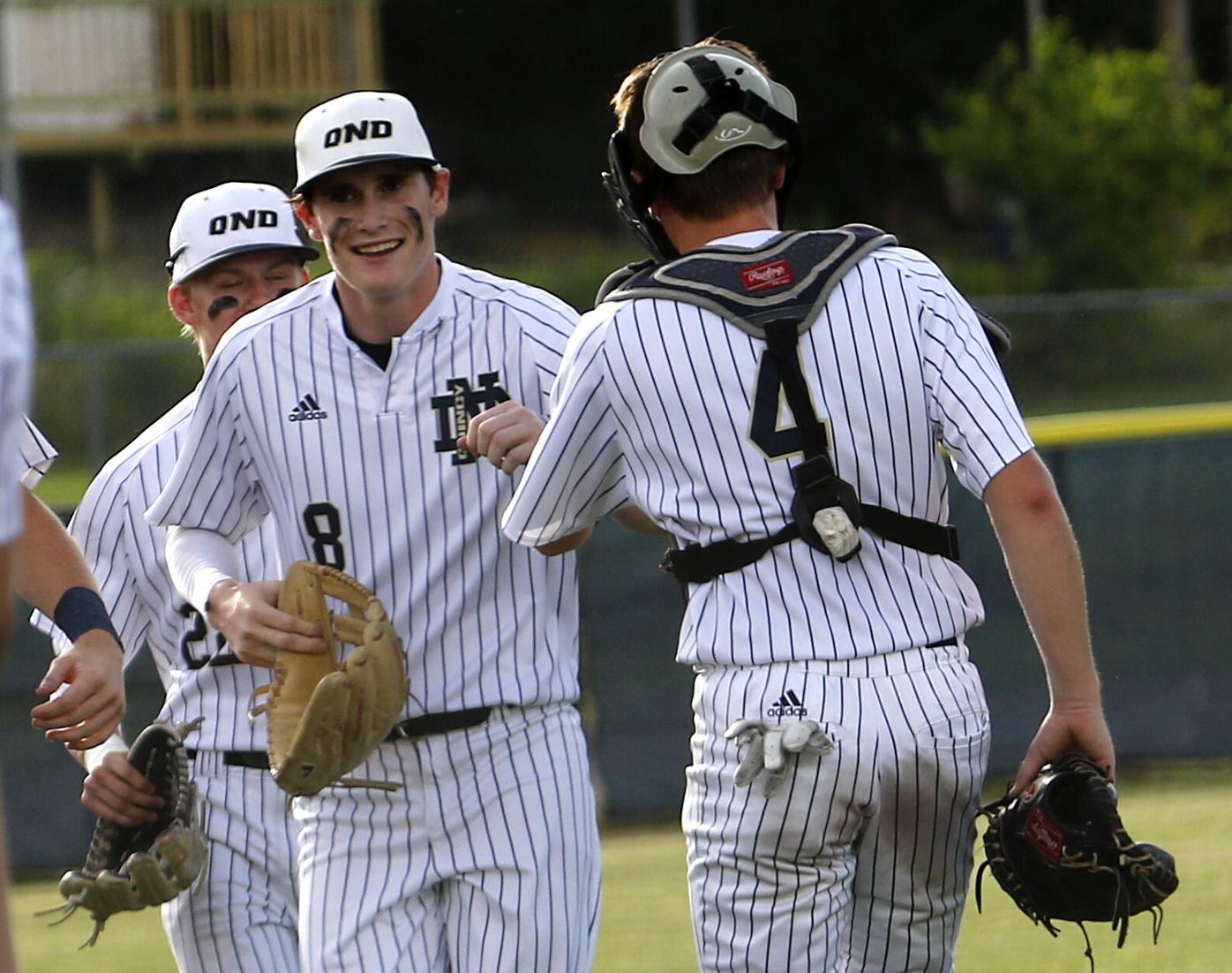 Quincy Notre Dame catcher Devin Jones, right, congratulates left fielder Harry Oden after Oden made a game-saving catch in the left-center field gap with the bases loaded in the top of the seventh inning as the Raiders beat Williamsville 4-1 Monday in the Class 2A regional championship at Ferd Niemann Jr. Memorial Ballfield.

Quincy Notre Dame catcher Devin Jones, right, congratulates left fielder Harry Oden after Oden made a game-saving catch in the left-center field gap with the bases loaded in the top of the seventh inning as the Raiders beat Williamsville 4-1 Monday in the Class 2A regional championship at Ferd Niemann Jr. Memorial Ballfield.

“I didn’t know if that was going out or not,” he said.

“I knew we had a chance of getting it,” Jones said. “Harry kind of scared me a little bit though.”

There turned out to be no need to worry.

Left fielder Harry Oden tracked down the long fly ball in left-center field for the final out of Monday’s Class 2A regional championship as the Bullets left the bases loaded and the Raiders escaped with a 4-1 victory.

If that ball had dropped between Oden and center fielder Ben Kasparie, all three runners on base likely would have scored and tied the game.

“You have to know the situation,” said QND coach Ryan Oden, who is Harry’s father. “The worst-case scenario there is we’re tied up. I’m confident we come back and win that game in that case in the bottom of the seventh.

“Your heart flutters a little bit, but you have trust in your guys out there to make plays.”

They’ll need a few more to survive a tough sectional.

“This is the first step in our journey,” Harry Oden said. “We’re just going to keep pushing. This was just one obstacle in our way and we got through it.”

It took some perseverance to do that.

Connoyer walked two of the first three batters he faced, but managed to escape unharmed with an infield popup and a strikeout. It allowed him to relax as he retired nine of the next 10 batters he faced before wriggling out of a bases-loaded jam in the fifth.

“It made me work a lot more than I thought I would have to work,” said Connoyer, who struck out four and held the Bullets scoreless for six innings. “But I liked the way I handled, and I liked the way our team handled it.

“They made plays behind me, and they helped me out.”

They made sure he pitched with the lead, something he had a hand in making happen.

With two outs in the bottom of the first, QND first baseman Dalton Miller launched a drive over the center fielder’s head he turned into a triple. Connoyer followed with a single up the middle to score Miller for the 1-0 lead.

In the fourth, with the Raiders still clinging to the one-run advantage, Jack Linenfelser reached on an infield single deep in the hole between the third baseman and the shortstop. QND senior designated hitter Ethan Kite followed with a no-doubt home run to left field for a 3-0 edge.

“We were kind of on nails,” Connoyer said. “It was kind of like we had to be perfect here even though we still had the lead. Once Ethan got that home run, we settled in and it was easier to control.”

Harry Oden’s two-out double to right-center field in the sixth inning — his second double of the game — drove in Linenfelser and gave the Raiders a little extra breathing room going to the seventh inning.

A couple of defensive miscues allowed the Bullets to load the bases with one out. Kaden Griffits drove a run home with a sacrifice fly to center before Connoyer walked Connor Carter to reload the bases. At that point, Ryan Oden made a move.

Miller, a right-hander, came on in relief and got Moser to drive the ball to the gap Harry Oden ran down to put the game away.

“We have to trust ourselves,” Jones said. “That comes with confidence.”

Winning a title produces confidence all the way around.

“That’s the first plaque I’ve won,” Jones said. “So this means a lot.”