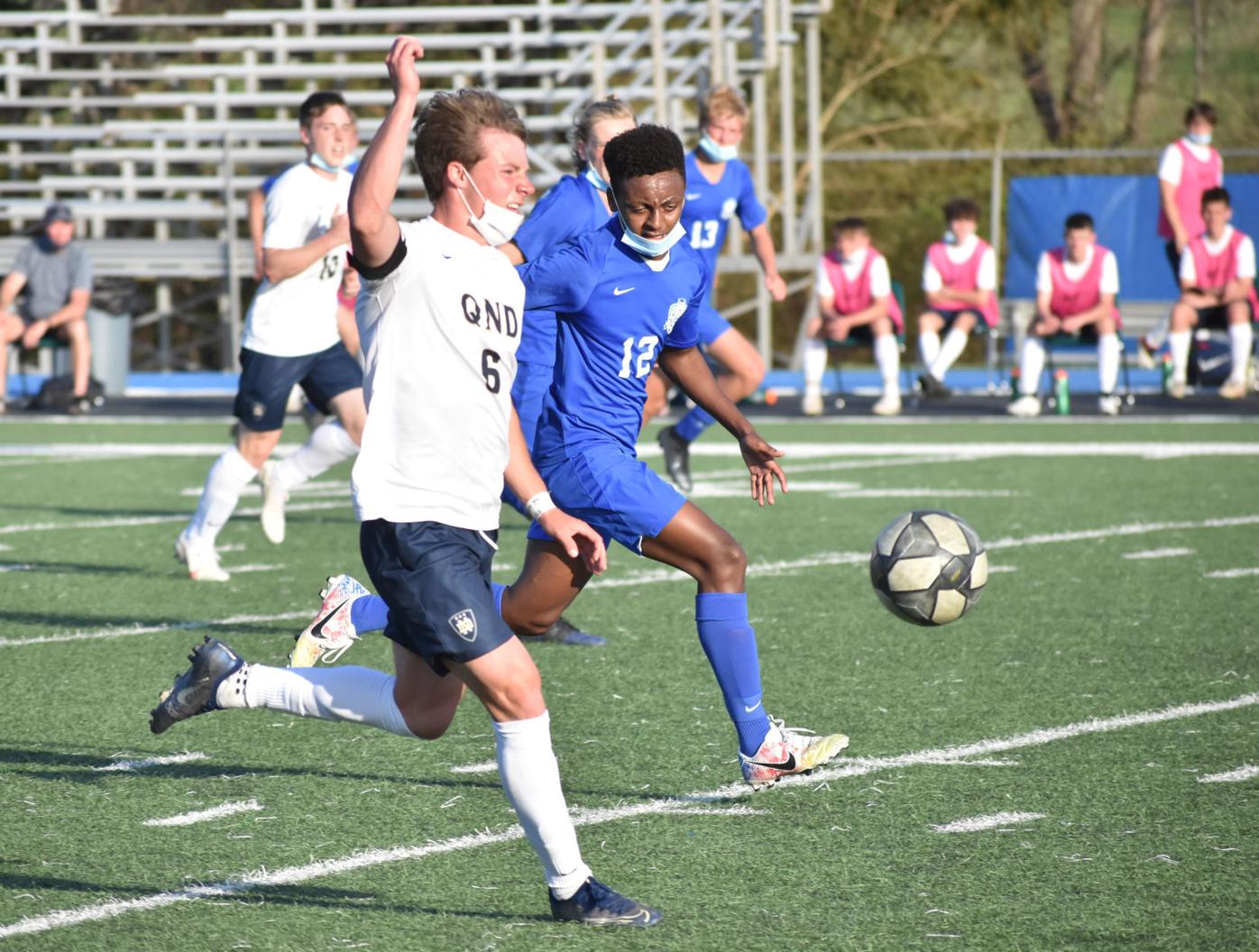 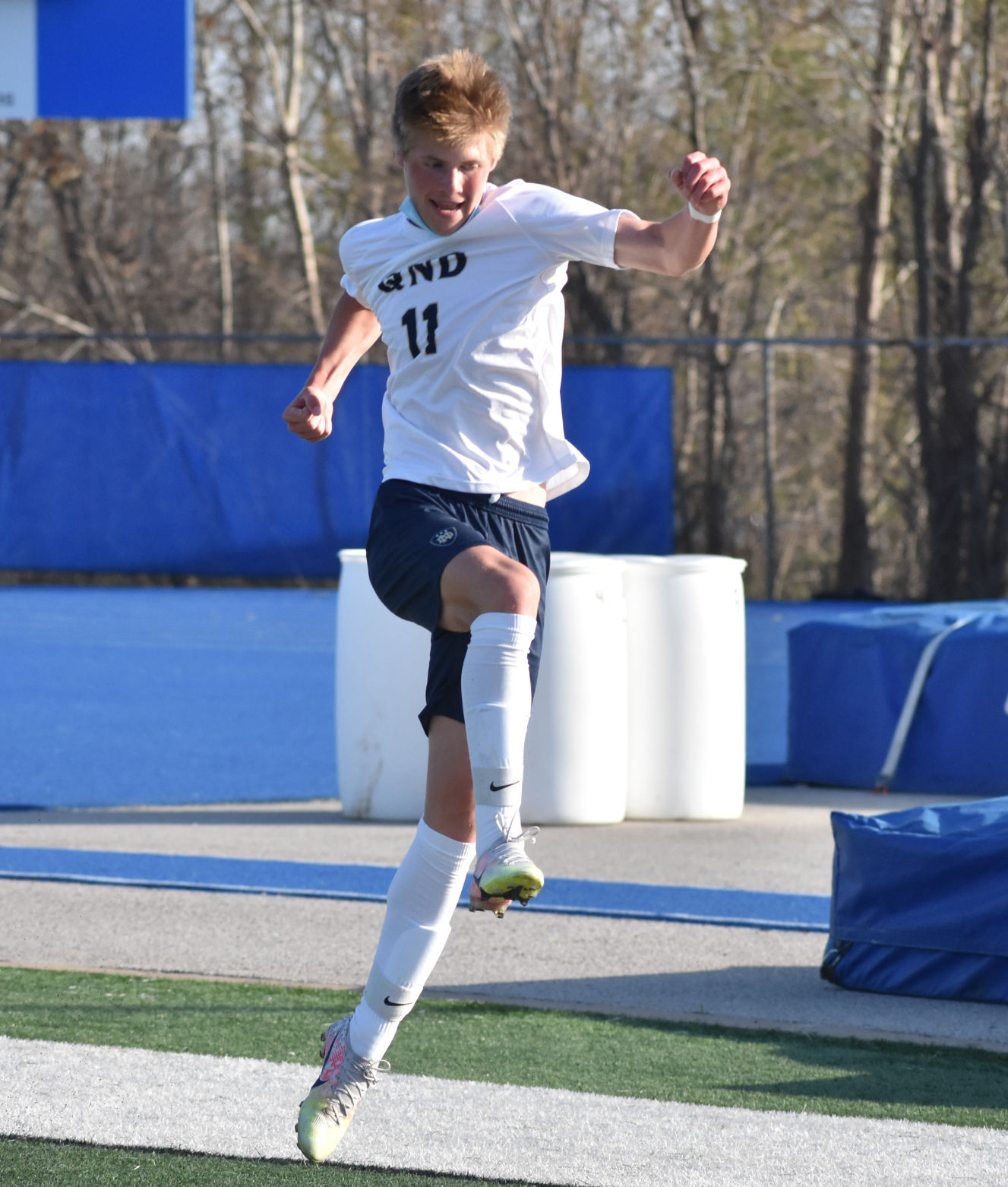 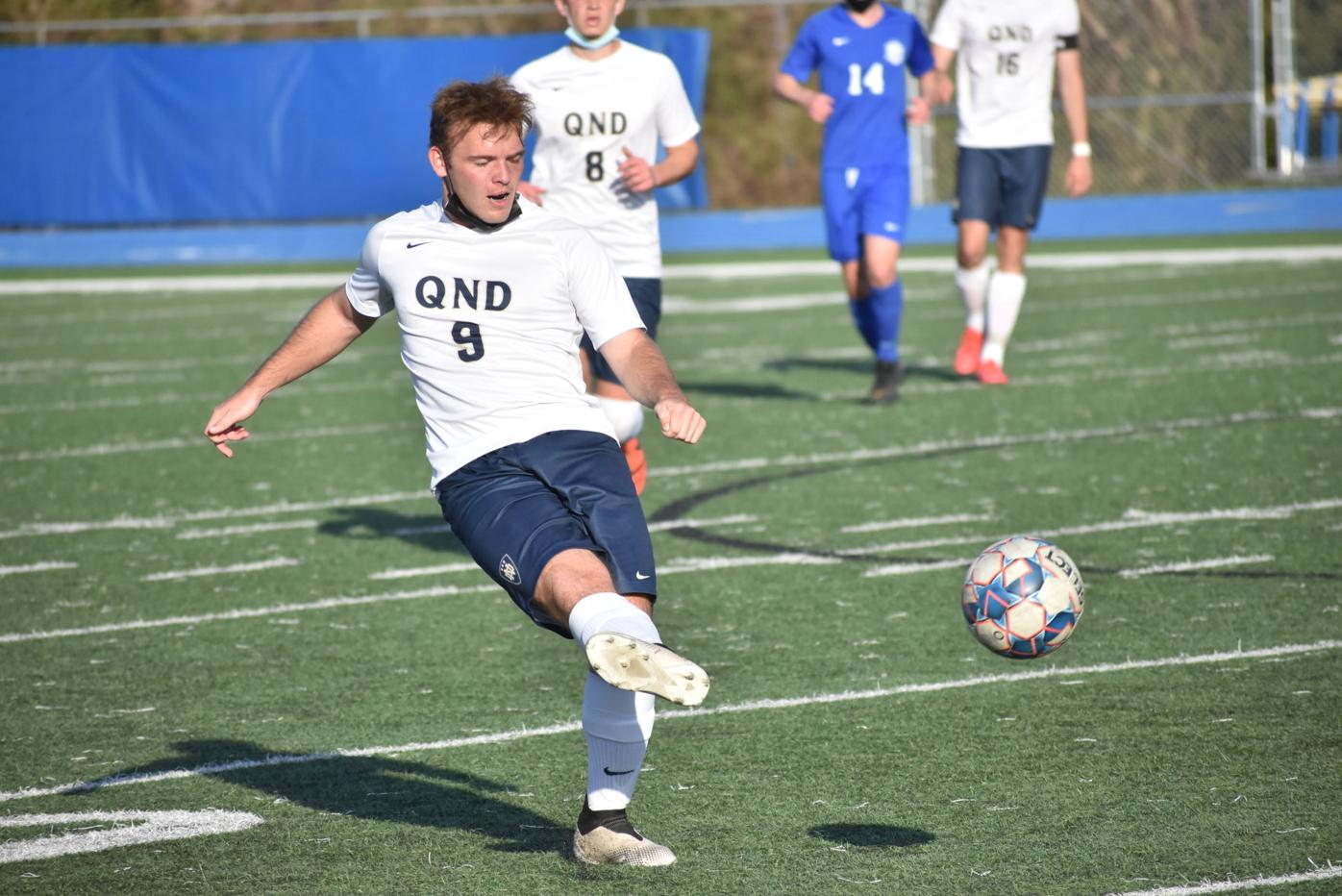 Quincy Notre Dame junior wing defender Cayge Hughes sends the ball upfield during the first half of the Raiders' victory over Quincy High School on Monday evening at Flinn Stadium. QND shut out the Blue Devils in both meetings this season.

Quincy Notre Dame junior wing defender Cayge Hughes sends the ball upfield during the first half of the Raiders' victory over Quincy High School on Monday evening at Flinn Stadium. QND shut out the Blue Devils in both meetings this season.

QUINCY — The avalanche of goals Seth Anderson and crew have scored makes it easy to assume an unstoppable offense is why the Quincy Notre Dame boys soccer team is eyeing an undefeated run through this shortened spring season.

Scoring alone isn’t why the Raiders haven’t been beaten.

An impenetrable defense is doing its job, too.

Monday night, the Raiders were as unbreakable as ever.

Quincy High School managed just six shots, tested QND goalkeeper Ethan Sparrow only twice and was shut out for the second time in this season’s city series, losing 5-0 at Flinn Stadium. It is the first time since 2015 the Raiders have shut out the Blue Devils twice in the same season and eighth time in the rivalry’s history.

“We go out every game knowing we haven’t given up a lot this season,” junior wing defender Cayge Hughes said following the Raiders’ fourth shutout in the last five games. “We always want to keep continuing that and using everything we have to win the games.

It’s resulting in some historic numbers.

The Raiders (10-0) have posted seven shutouts with only the 1978 team, which started its season with eight consecutive shutouts, being stingier. QND also is on pace to challenge the 1978 team’s record for fewest goals allowed in a season, which was 12 goals in 27 games.

This team’s success has been made possible by the maturation of the back four and the cohesion they’ve developed.

“When we started in the fall in what should have been the real season, they were really skittish and they were like, ‘This is my side. That’s your side. You take care of that,’” QND coach Greg Reis said. “Now they’ve figured out we all shift as a group and we all defend as a group at the point of attack.

“If they spray the ball out wide, we let them do that and we will make an adjustment from there. They’ve done a really nice job of progressing in terms of giving coverage in dangerous positions.”

Hughes had an assist on Seth Anderson’s second goal, hitting the corner kick Anderson headed inside the back post. The senior striker’s third goal came in the 57th minute when he won a ball punted long by QND goalkeeper Ethan Sparrow, beat two defenders and pounded a shot inside the right post.

The other three goals came after either senior center back Gabe Whittaker or junior center back Quinton Hankins played a ball over the top of QHS’s defense to start a run or a scrum.

“Gabe and Q hitting balls over the top is deadly,” Reis said. “Gabe kind of hits them over kind of like Phil Mickelson checks one up. He’s pretty special with how far he can hit a ball and with the accuracy to a guy running onto it. With Seth and Tanner running on, it’s a dangerous option if you’re going to try to play a high line.”

Sophomore forward Tanner Anderson scored two of the QND goals in the first half, converting an assist from his older brother and finishing another following several attempts in front of the net.

Seth Anderson scored his first goal off a floater into the top right portion of the net from about 25 yards out and he finished with his seventh hat trick this season. He has scored in every game this season, and dating back to the 2019 season, has scored in 11 straight games.

The Anderson brothers scored all 11 goals for QND in the two rivalry games.

“Playing against kids of that caliber, you tip your cap,” Bridal said.

Despite the setback, Bridal appreciated a stronger effort and better mentality than during the first matchup.

“Our kids worked as hard as they could,” Bridal said.

If the response to this loss is similar to the response last time, Bridal knows good things lie ahead. The Blue Devils (6-4-1) went on a four-game unbeaten streak after the first loss to the Raiders and jump back into the fray like last time with a Western Big Six Conference matchup, this time at Geneseo on Wednesday.

“We’re on a roll right now,” Hughes said. “We want to keep this going. We can’t stop right now.”