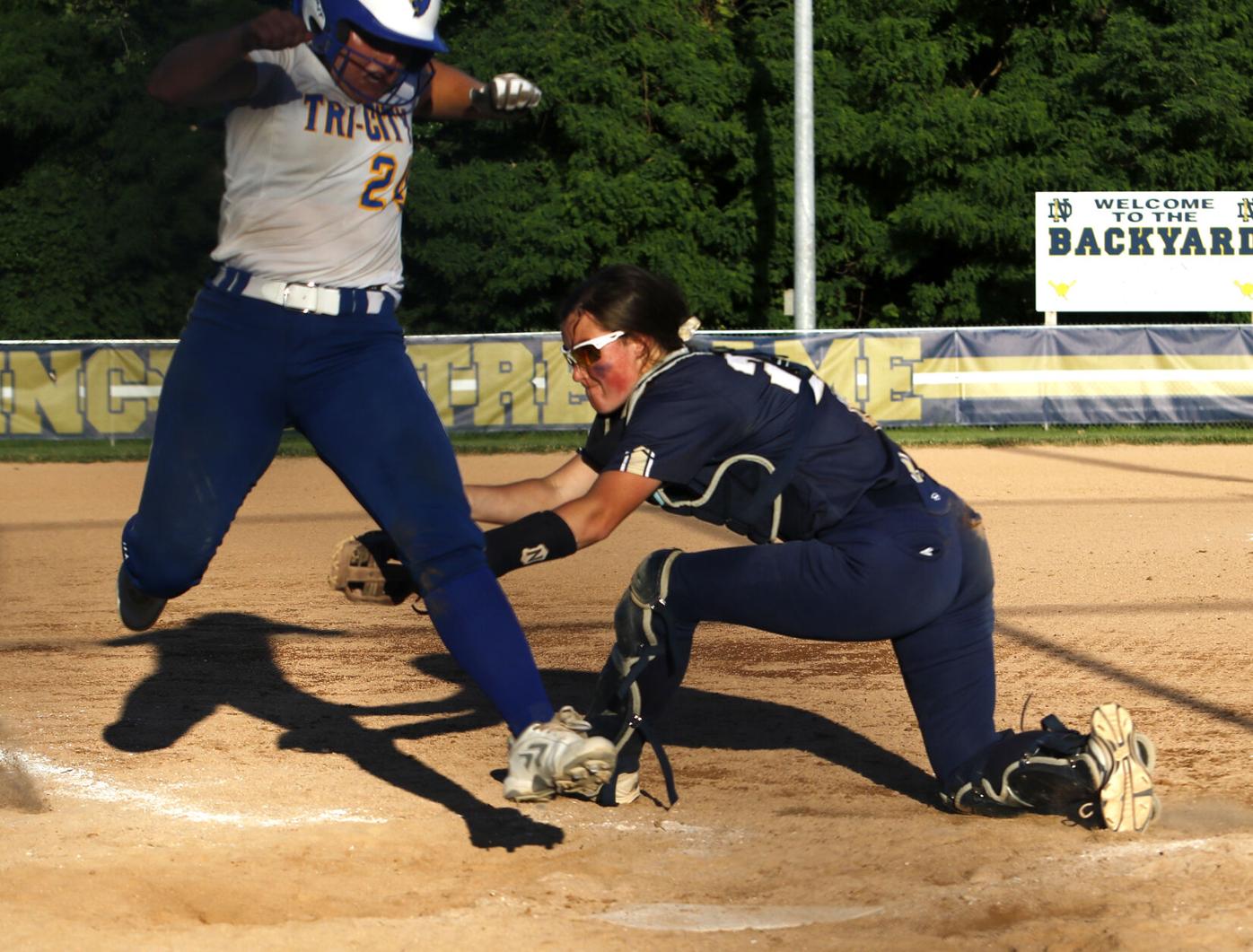 Buffalo Tri-City’s Emma Farley, left, scores ahead of the tag from Quincy Notre Dame catcher Lindsey Fischer for the Tornadoes’ second run of the 10th inning in Tuesday’s Class 2A sectional semifinal at the Backyard. 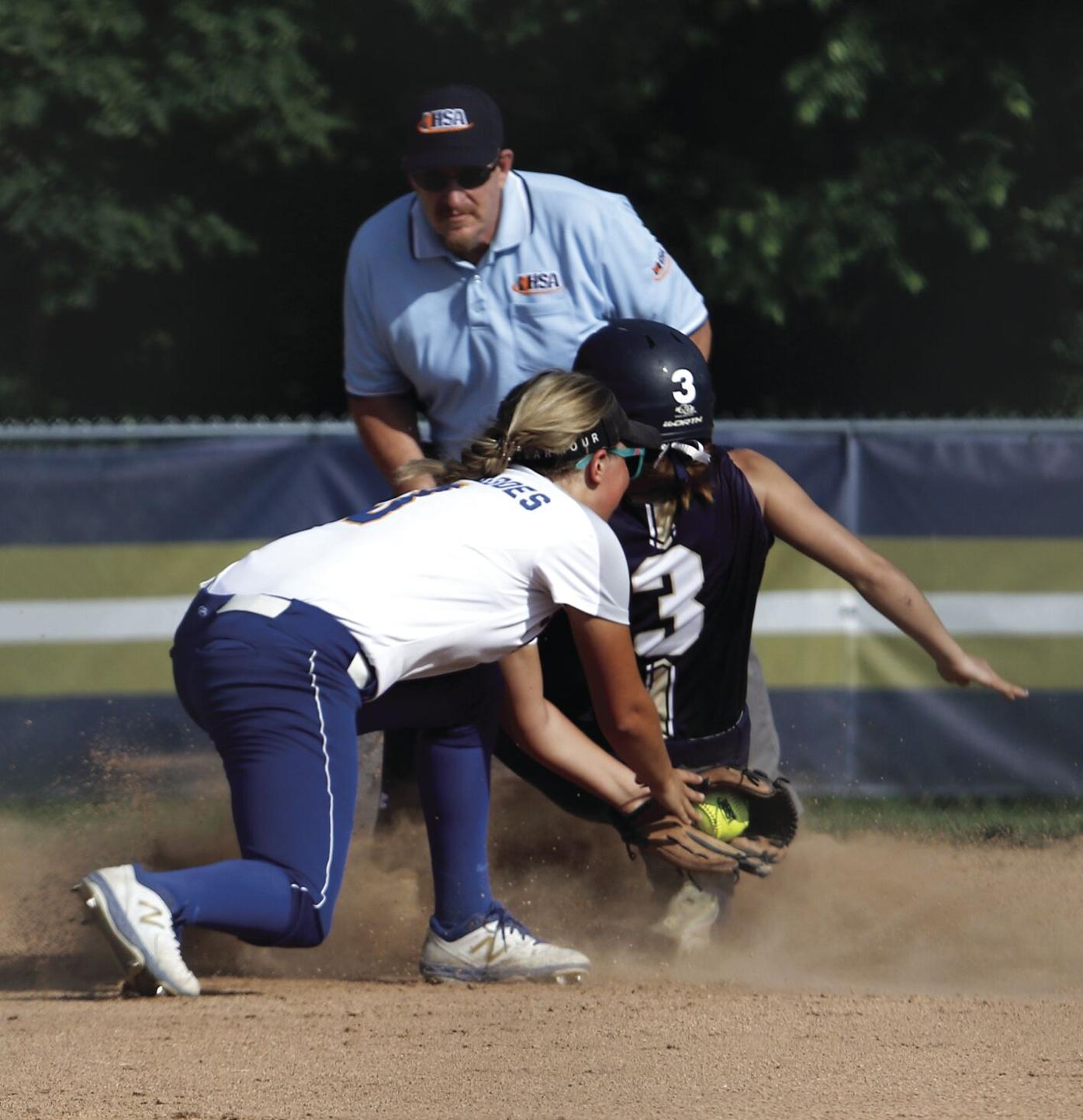 Quincy Notre Dame's Kailey Wall, right, slides safely into second base on a stolen base attempt during the first inning of Tuesday's Class 2A sectional semifinal against Buffaloe Tri-City at the Backyard.

Buffalo Tri-City’s Emma Farley, left, scores ahead of the tag from Quincy Notre Dame catcher Lindsey Fischer for the Tornadoes’ second run of the 10th inning in Tuesday’s Class 2A sectional semifinal at the Backyard.

Quincy Notre Dame's Kailey Wall, right, slides safely into second base on a stolen base attempt during the first inning of Tuesday's Class 2A sectional semifinal against Buffaloe Tri-City at the Backyard.

QUINCY — Grace Brenner made amends for her mistake.

It was the last thing the Quincy Notre Dame softball team needed to have happen.

The Buffalo Tri-City left fielder dropped a fly ball down the line with two outs in the fifth inning, allowing the Raiders to score the tying run in what eventually turned into a 10-inning affair in the Class 2A sectional semifinals Tuesday night at the Backyard.

Five innings later, leading off the top of the 10th, Brenner drew a walk, advanced around to third on back-to-back sacrifice bunts and scored the go-ahead run when Jordan Cross drew a bases-loaded walk with one out. The Tornadoes tacked on another run and slipped away with a 3-1 victory

“We had to battle,” said Tri-City coach Brad Sturdy, whose team will face Springfield Sacred Heart-Griffin in Thursday’s sectional championship. “We had some situations where we made some mistakes and had to battle through it.”

No miscue loomed bigger than Brenner’s error, which made her redemption monumental.

“That shows some toughness and perseverance,” Sturdy said.

An errant throw by third baseman Haley Schertel on a sacrifice bunt allowed the Tornadoes’ Delaney Chumbley to score as she hustled to third on the error and went home when the throw went to second base trying to stop Emmorie Brown from advancing.

With two outs in the bottom of the frame, the Raiders dug in. Corinne Dickerman collected a single and went to second on a throwing error by Tornadoes catcher Emma Farley. Pinch-hitter Brooke Boden took a couple of hacks and fouled a couple pitches off before lifting a fly ball down the left-field line.

Dickerman scored when Brenner dropped the ball, tying the game at 1.

“Always fought,” Orne said. “I get lucky because they always do that for me. They fought through everything.”

Eryn Cornwell was the epitome of that resilience.

The junior right-handed pitcher worked around a baserunner multiple times, including the top of the seventh when she hit Kelsey Bruno on the left knee with a pitch. Bruno was left stranded at second base. Overall, Cornwell left 11 runners stranded.

“She pitched her best game of the season by far,” Orne said. “Best game by far. I was incredibly proud of her and her effort.”

Having poured every ounce of energy into keeping the Raiders in the game, Cornwell simply ran out of gas in the 10th.

She walked Brenner leading off and allowed a bunt single by Farley, who dropped her sacrifice attempt into an empty space on the left side of the infield. Kamryn Sturdy followed with a sacrifice bunt to get both runners in scoring position, so Orne intentionally walked Grace Blair.

Cross drew the bases-loaded walk to score Brenner and Kenzie Krider delivered a sacrifice fly to score Farley with an insurance run.

The Raiders had a chance to rally in the bottom of the 10th, but Dickerman’s smash with one out was gloved by Kamryn Sturdy at third base as QND went down 1-2-3 to end the game.

“We just didn’t put the bat on the ball enough,” Orne said.

Two dominant pitchers had a lot to do with that. Bruno threw the first 4.2 innings before Brad Sturdy brought in Chumbley, the junior left-hander who has committed to the University of Illinois, who avoided danger by giving the Raiders a different look.

“I thought we’d have more contact,” Orne said. “We were prepared for both. I just thought with the way we hit all season that we’d get some timing. Everybody had second and third at-bats against them. I thought one of those times through we’d get a double or something to create some excitement.”

Brad Sturdy’s idea was designed to avoid that.

“We had a plan we were going to use (Bruno) until the third time through and then go back to Delaney,” said Brad Sturdy, whose team is 28-2. “We thought she’d give their lefties some trouble. They’re just different. That’s a good thing to have. So we’re blessed there.”