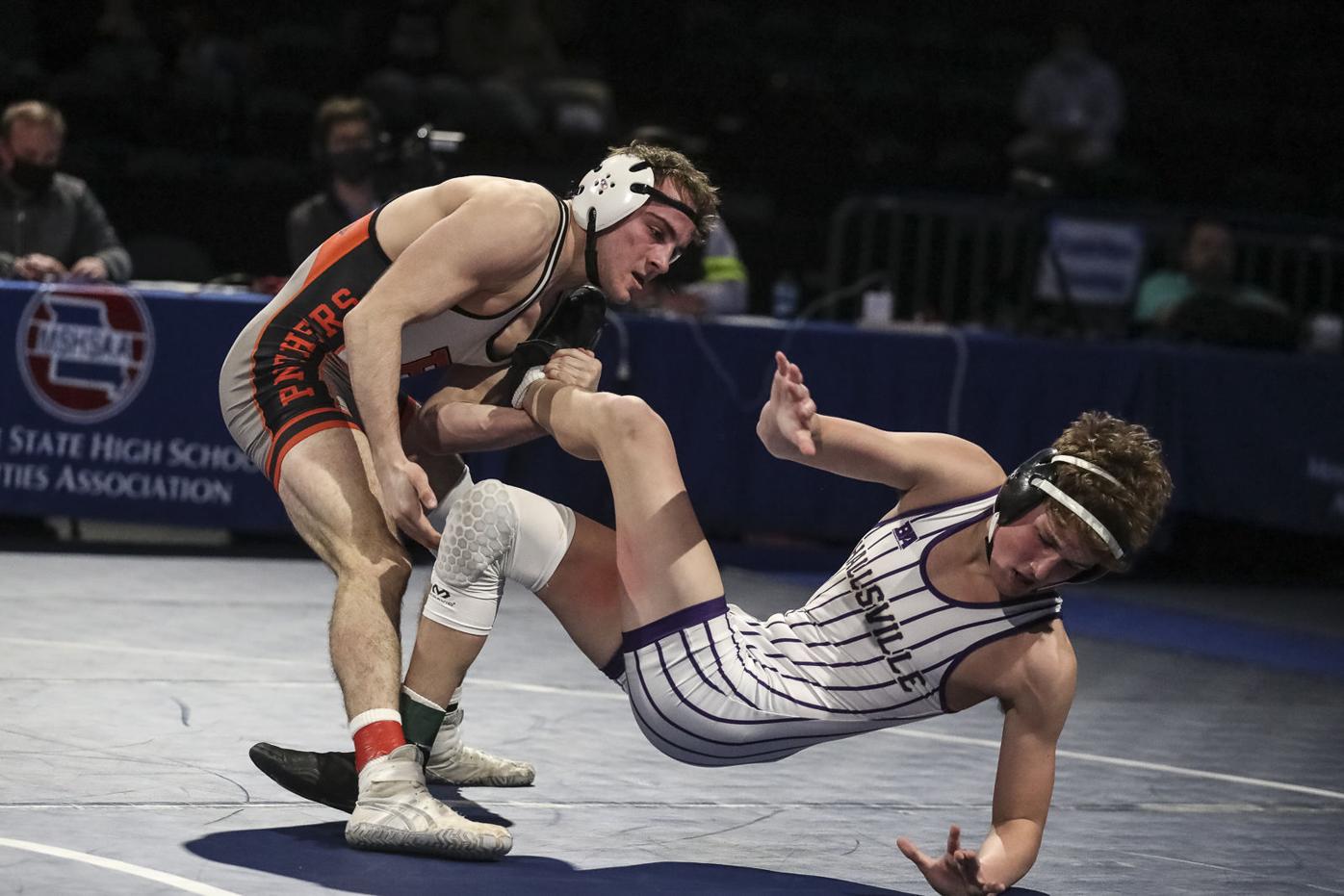 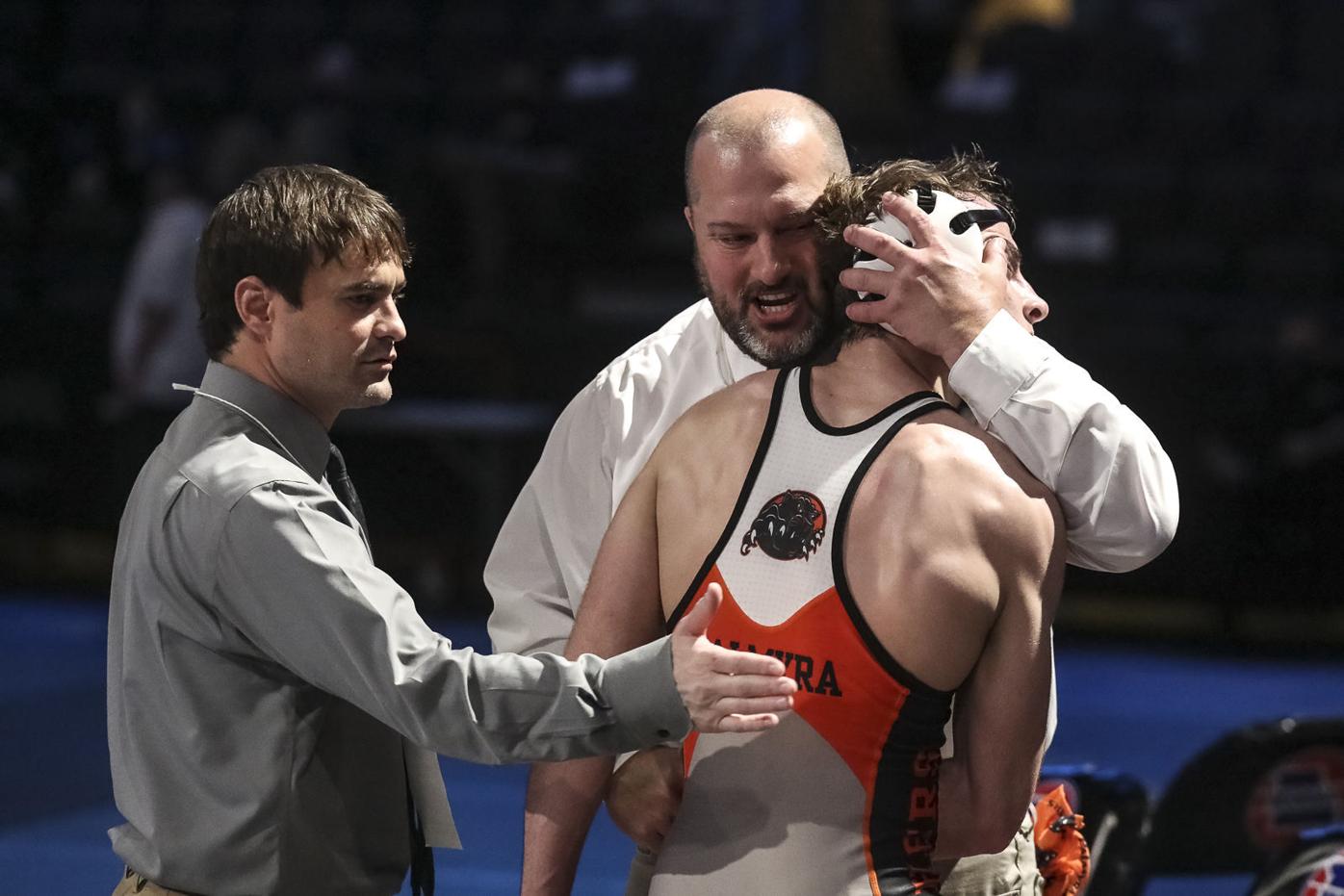 Palmyra sophomore Colin Arch is greeted by his coaches after defeating Hallsville’s Gavynn Carpenter to claim the 132-pound title in the MSHSAA Class 1 State Wrestling Championship on Wednesday in Independence, MO. 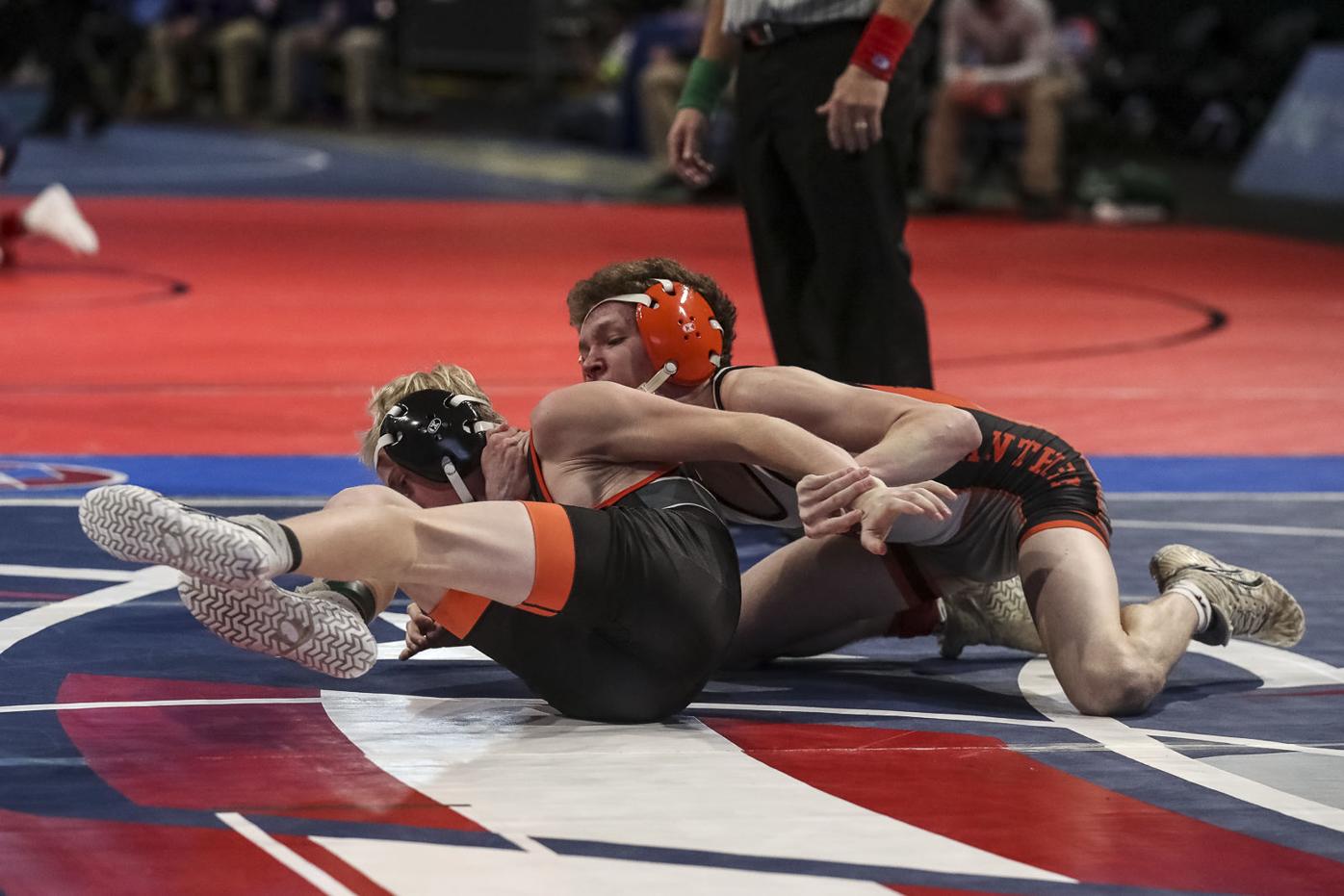 Palmyra sophomore Colin Arch is greeted by his coaches after defeating Hallsville’s Gavynn Carpenter to claim the 132-pound title in the MSHSAA Class 1 State Wrestling Championship on Wednesday in Independence, MO.

INDEPENDENCE, Mo. — As soon as Collin Arch saw his opponent for the 132-pound championship match in Wednesday’s Class 1 Missouri State Wrestling Championships at Cable Dahmer Arena, he was hit with a mix of confidence and butterflies.

The Palmyra sophomore would have to go through Hallsville’s Gavynn Carpenter to win his second straight individual state crown, and after defeating Carpenter in both the district and sectional finals Arch knew he had what it takes to win.

He also knows its hard to beat anyone three straight times.

“I was definitely a little nervous, and wrestling a kid three times, you’re definitely going to be more nervous every time,” Arch said. “I still just went out there and wrestled my match and I just knew what to do.”

An early takedown helped clear the nerves and another before the end of the first period put Arch ahead 4-1. In the second period, Arch started to exert his will while building a 9-2 lead, and in the third period he put the finishing touches on an 11-2 victory to win the Class 1 132-pound championship and become the first two-time state champion in program history.

“It was great,” Arch said. “Even better that I’m here with five of my other teammates and four of us placed. That’s awesome.”

“I feel like we definitely all wrestled our hardest and did our best effort,” Arch said.

While it was a great day for the Palmyra program, coach Josh Buatte couldn’t help but be in awe of the continued dominance of Arch, who finished the season at 20-0 and is still undefeated in his high school wrestling career.

“That’s all on him and how hard he works. You can’t take anything away from that kid or give any credit to anyone else but him,” Buatte said. “The kids in the room help him and he helps them, but he earned that.”

Arch used his strength to his advantage in the title match, completely overpowering Carpenter at times to force takedowns.

“Pound for pound, I don’t think anyone can measure up to what he does in the weight room,” Buatte said. “He puts in a lot of work in the offseason to get to where he’s at.”

Crane also had a considerable strength advantage in the 106 third-place match, and he used that advantage to pin Mid-Buchanan’s Ryder Coons in just 32 seconds. Crane led 4-0 in the first period of his championship semifinal match before getting reversed and caught on his back for a pin by eventual 106 champion Lucas Barry from St. Michael the Archangel, but Buatte thought Crane recovered well after the disappointment.

“You can’t say enough about that kid, he’s a leader in the room and out of the room,” Buatte said of Crane. “He is just a joy to be around, and a great way to end the season. It’s a disappointment not to end where he wants to end, but going out and making a statement in the third place match is a good way to go out.”

Triplett suffered his disappointment earlier than Crane by losing in the 220 championship quarterfinals to eventual champion Jonah Frank from Carrolton, but he ran through the consolation bracket to finish in fifth with a 2-1 decision over Centralia’s Sam Lynn, who Triplett lost to in the sectional finals.

“When you lose and come back and place, that’s where you define where a kid really is,” Buatte said. “(Triplett) came back and, if the brackets were set up differently and he could have wrestled back for third, I think he could have won third. But that’s not the hand we were dealt, and he dealt with that and came back and made a statement to prove he was where he was supposed to be.”

Stevens started off well with a 13-0 major decision victory in the 126 bracket, but he came up against two tough opponents in Lucas Laux from Fatima in the semifinals and Andrew Stanfield from SMA in the third-place match, who combined had one loss before Wednesday. While Stevens wasn’t able to win either match, losing to Laux by a 17-2 technical fall and Stanfield by a 6-3 decision, Buatte said he should still be proud of placing fourth.

“The guys he lost to were legit, and I know he doesn’t care who he wrestles or who he loses to, he’s disappointed,” Buatte said. “He came out and wrestled extremely well, but he came up against a tough draw. To end up where he was after not placing last year, coming back and proving something to himself I think was the biggest thing.”

Palmyra’s two other boys on Wednesday, Hayes Miller at 160 and Nolyn Richards at 195, both lost in their first two matches, as did Panthers’ junior Dyoni Mundi in the girls state meet on Tuesday. All three of them will be back next season, and Buatte believes his program is in great shape moving forward.

“The only person we lose, unfortunately, is Kaden Crane, but everybody is back next year,” Buatte said. “We look forward to that. The future of Palmyra wrestling is in their hands and they can take off if they want.”