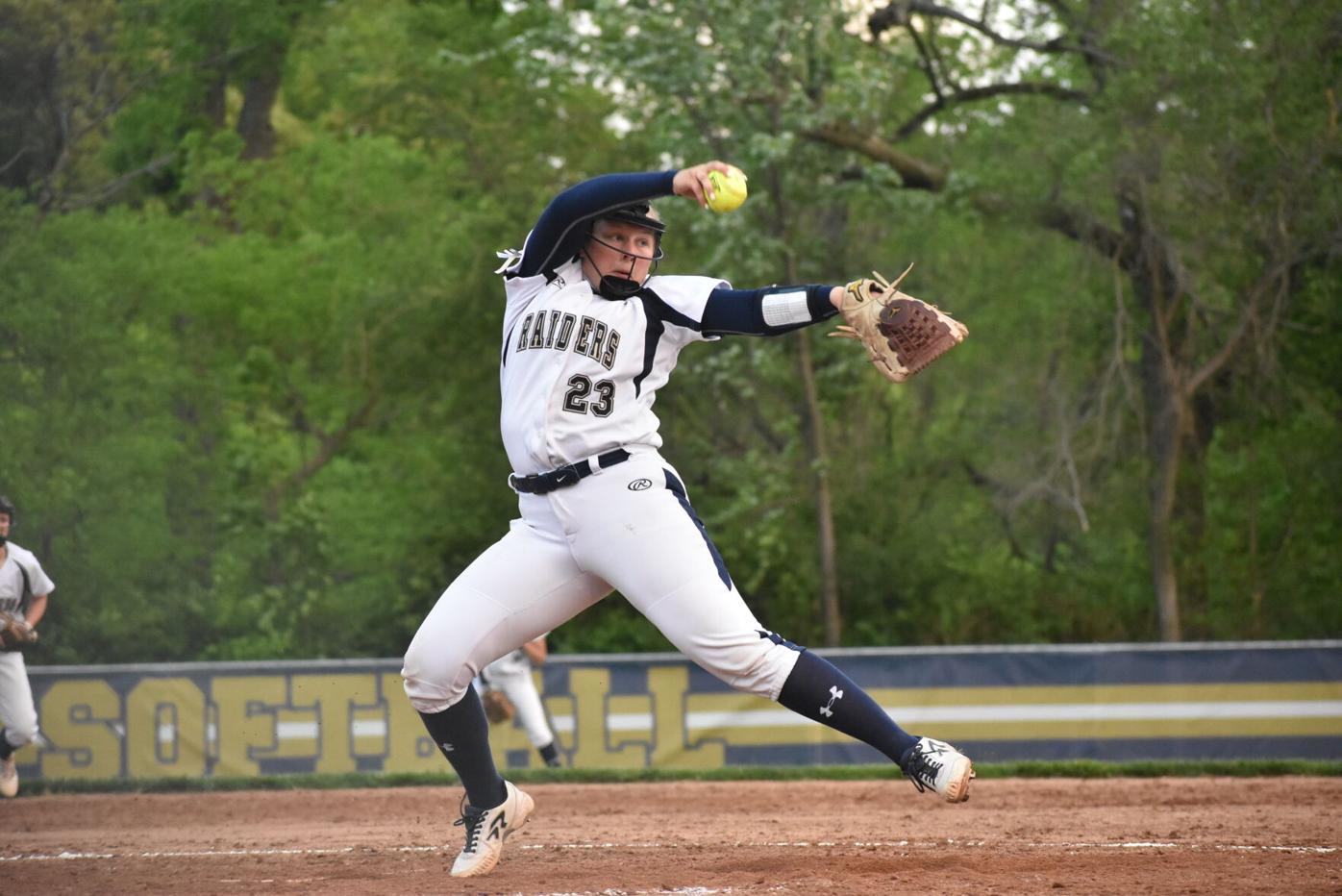 Quincy Notre Dame pitcher Eryn Cornwell winds up for a pitch during the second inning of Monday’s victory over Quincy High School at the Backyard. Cornwell pitched a no-hitter into the sixth inning. 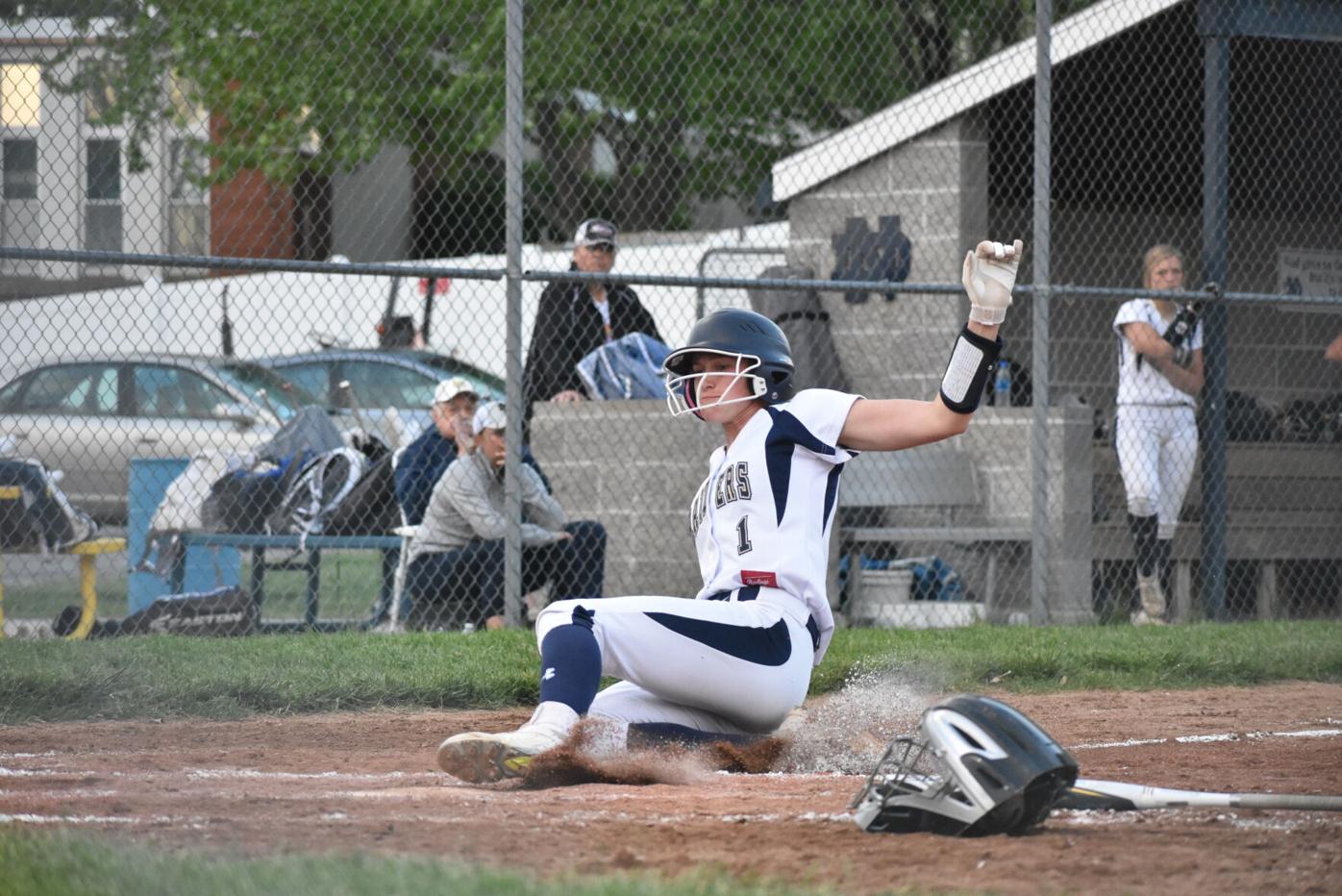 Quincy Notre Dame sophomore Abbey Schreacke slides into home plate to score the first run of the Raiders’ 14-2 victory over Quincy High School on Monday at the Backyard.

Quincy Notre Dame pitcher Eryn Cornwell winds up for a pitch during the second inning of Monday’s victory over Quincy High School at the Backyard. Cornwell pitched a no-hitter into the sixth inning.

Quincy Notre Dame sophomore Abbey Schreacke slides into home plate to score the first run of the Raiders’ 14-2 victory over Quincy High School on Monday at the Backyard.

QUINCY — Because they were scheduled to take batting practice at the Backyard before heading across town to face Quincy High School on Monday evening, the Quincy Notre Dame softball players were milling around in the dugout when late-afternoon thunderstorms moved through the area.

So they just stayed put until the rain ended.

“We were watching our field the whole time,” QND junior pitcher Eryn Cornwell said. “Our field never had puddles on it during the rain.”

“It needed some rain,” Orne said. “I worked the field on Sunday, so I knew it could handle this rain.”

Still, there was no certainty the game would be played.

“The players kept asking, ‘Coach Orne, what are we going to do?’” Orne said. “I told them we’re going to wait until it stops raining and then see what happens.”

After the storms passed, the teams were able to work out a change of venue, moving from the QHS field to the Backyard with the Blue Devils remaining the home team. That didn’t matter much as the Raiders used a mix of speed and power to earn a 14-2 victory.

“We have a lot of options,” Orne said. “And we had a lot of contributions from everyone.”

Most notably, Cornwell was nearly unhittable.

She held the Blue Devils (4-4) to just two baserunners – one reached on a walk, the other on an error — through the first five innings before Elaina Schreacke singled with one out in the sixth inning. Jaylen Lubbert followed with a double, and both runners scored on passed balls.

“All I wanted was to finish the inning strong and get us the victory,” Cornwell said when asked if she was thinking about the no-hitter. “We needed the victory as a team.”

“I really focused on hitting my spots,” Cornwell said.

She also benefitted from an opportunistic offense.

“Knowing there’s always going to be runs scored and the offense is going to get people on base makes my job easier,” Cornwell said.

QND (6-2) took a 1-0 lead in the second inning as Logan Pieper’s two-out double scored Abbey Schreacke, who led off with a single and stole second to get into scoring position. In the third, the Raiders tacked on two runs courtesy of Schreacke’s two-out, two-run double.

Kailey Wall, who had singled, and Haley Schertel, who had walked, each stole a base ahead of Schreack’e double.

“We ran the bases well,” said Orne, whose team had seven stolen bases. “We were aggressive and put pressure on their defense.”

Two stolen bases in the fourth inning contributed to three more runs, while Schreacke scored on a groundout in the fifth. In the sixth, the Raiders tacked on seven runs as Lindsey Fischer smacked an RBI triple and Wall added a two-run double.

Schreacke finished 4 for 4 with three runs scored and four RBIs, while Wall went 3 for 5 and Pieper was 2 for 3.

Brynn Krutmeier suffered the loss for the Blue Devils, striking out three, walking four and allowing 12 hits over 5.1 innings.